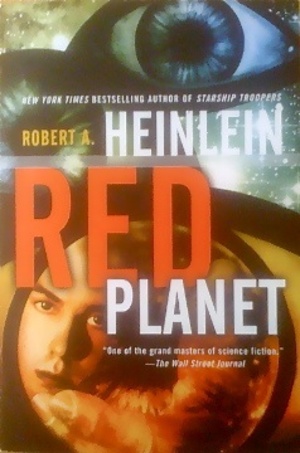 Jim Marlowe is a young colonist growing up in the South Colony on Mars. He has a companion, a "Bouncer" he named Willis, which is a basketball shaped, furry, native creature. Bouncers are rare, they possess moderate intelligence, and they have the ability to exactly reproduce any sound that they hear. When Jim and his friend Frank go off to the Company boarding school, located in a town far away near the martian equator, they take Willis with them.

The new headmaster at the school makes life miserable for the boys. When he finds Willis during a room inspection, he confiscates him as an illegal pet and threatens to sell him to the London Zoo. When the boys rescue Willis from the headmaster’s office, the creature recites a conversation he overheard about the Company putting an end to seasonal migrations by the colonists. This means that the boy’s families will be forced to remain near the south pole during the harsh winter months, when the temperatures easily fall to over one hundred below.

Armed with this alarming knowledge and unable to directly contact home, the boys must escape from the school and (with the help of some strange natives) make the long trip back home to warn their families of the Company’s sinister plan!

Originally published in 1949, Red Planet was Robert A. Heinlein’s fourth novel, and the third of his Juveniles Series for Scribner’s. Some of the other titles in the series include Rocket Ship Galileo, Space Cadet, Starman Jones, and Have Spacesuit, Will Travel. Time, and the rapid march of science, have not been as kind to Red Planet as they were to some of Heinlein’s other work. This story takes place on a Mars as described at the end of the 19th Century by astronomer Percival Lowell, complete with water filled canals and semi-breathable air. Heinlein has populated this landscape with large-scale native flora and a population of Martians with their own ancient cities and culture. This novel also contains some topics which probably would not make it into young adult fiction today, including the rights of colonists to own and carry weapons.

Be that as it may, Red Planet is a great example of Golden Age Science Fiction and is a very well told adventure story. I believe it is an excellent book to share with your kids, especially young boys. For the über-geeks among us, it can also be the catalyst for a teaching moment, illustrating how far we have come in planetary science in the last six decades. Red Planet is still in print, now by Del Rey, and is available from Amazon. The most recent printings of this book contain Heinlein’s entire work (the original version was quite severely edited) which is a much better read, in my opinion, than the one released in 1949. Even with the extra pages, the book is relatively short and is suitable for even the shortest of pre-teen attention spans. Enjoy!

Is Trading Cash for Grades a Good Idea?