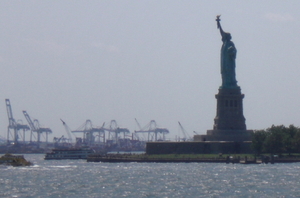 My better half recently returned from a week doing the tourist thing in Boston and New York.  She snapped a pretty good selection of photos during her travels and grabbed a few specifically for me: these massive container cranes in New York.  Someone on the tour she was with mentioned that these things had been the inspiration for the Imperial AT-AT Snow Walkers in The Empire Strikes Back, so of course she had to.  Looking at the cranes lined up behind the Statue of Liberty, it’s hard to argue that such a connection would be a stretch. Well, the actual version had it that Port of Oakland container cranes had inspired George Lucas, but that story was officially debunked earlier this year in an interview with Lucas and Phil Tippet (the guy who actually animated the AT-ATs).

Oh well…  But as far as big, lumbering machines, these cranes are still pretty cool.  And pretty fascinating for curious Geeks, young and old.

Speaking of impressive contraptions, there are plenty to be found among the photos snapped by readers in the GeekDad Flickr Pool– be sure to check it out; or even better, join up and post some shots of your own. 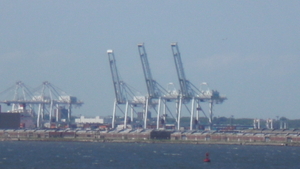 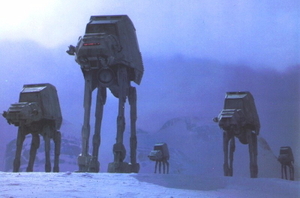 Make a Cylon at Home

A Google-a-Day Puzzle for June 30