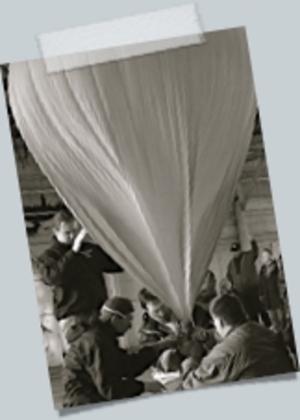 Winners never quit, so the Spirit of Knoxville balloon team we introduced you to last month is making another attempt to loft an autonomous helium-filled balloon that will cross the Atlantic Ocean. Spirit of Knoxville V (SNOX V) is scheduled to launch from the Island Home Downtown Airport in Knoxville, Tennessee at 8:00 PM EDT Saturday, April 5.

The team’s last balloon, SNOX IV (reported to you in Geekdad last month), was launched from the same location the evening of March 10th and made it to within about 350 miles of the southern coast of Ireland. The balloon carried a GPS receiver, control computer, and ham radio transmitters to report its status and position in its historical flight. SNOX IV traveled over 3300 miles in about 40 hours and at its highest point reached 39,872 feet. Not bad for an amateur effort!

The Spirit of Knoxville balloons rely on the jet stream, a fast-moving river of wind high above the Earth’s surface, to propel them across the ocean. Unfortunately the jet stream’s strength fades in the summer, so the team reports that this will be their last attempt this season. The balloons have the ability to adjust their altitude by dropping ballast under computer control. This allows them to compensate for the loss of lift as the helium in the balloon cools at night. That’s what enabled SNOX IV to stay aloft long enough to come within shouting distance of Ireland.

The Spirit of Knoxville team is inviting radio amateurs to help with collecting reports transmitted from SNOX V. They have a special decoding program you can download and install on your home computer that will receive, decode, and forward balloon telemetry data to the team’s database over the internet. You don’t need a transmitter so anyone can help, even if you’re not a licensed ham. You do need a receiver that can tune to approximately 10.140 MHz and receive single sideband signals. The technical details and the program are at the Distributed Tracking and Relay Client (DTRC) web site.

With each balloon launch the Spirit of Knoxville team learns more about the art of balloon flight, so there’s a good chance SNOX V will make it all the way to Europe. You can follow the action at the Spirit of Knoxville web site. Click the "Live mission status" link to see a near-real-time update of the balloon’s status. So tune in, and let’s cheer them on to success!

Comics Spotlight on Marvel Ultimate’s The Death of Spider-Man

The Hobbit as Tolkien Saw It