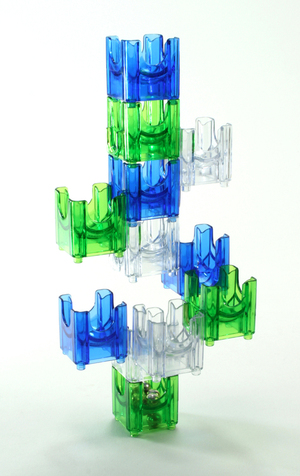 As 3D printers become desktop tech rather than factory tech, we’re starting to see exciting new products come into play — products which may have been overlooked in the old pipeline, where design and prototyping costs kept the little guy out, and marketing costs were prohibitive. But Minneapolis’ Andrew Comfort can tell you, it’s a new world now.

A couple years ago he created Q-BA-MAZE, a building block set with holes and channels that can direct a ball bearing throughout the block structure. Now the toy is stocked at retailers around the country and has been featured on Gizmodo and ID Magazine’s New and Notable ’07 issue. And just to show excited people are getting, the Walker Art Center recently commissioned Comfort to create a gigantic Q-BA-MAZE fish slash marble run for their atrium.

Recently I had a chance to chat with Comfort.

JB: Could you describe how you came up with the idea for Q-BA-MAZE?

AC: As a boy I loved playing with this marble run my grandfather made. Many years later, the idea popped into my head, “What if I the hand-carved blocks he made to turn the marbles around were loose and reconfigurable?” I immediately fired up the computer and sketched this out in 3D and started playing with these virtual rectangular blocks. Each block had just one entrance and one exit and I was frustrated by the limited set of pathways I could make. So the challenge emerged to make a system that would give people the greatest possible flexibility to design pathways that twist and turn wherever they like. A first move was to switch from rectangles to cubes.

JB: Can you tell me more about your grandfather’s marble run?

AC: My grandfather’s marble run is made of pieces of wooden molding and 2x4s, nailed and screwed together and painted forest green. He modeled his marble run on one he played with as a boy that my great-grandfather had made. And my great-great-grandfather was an immigrant cabinetmaker from Switzerland. So I think the lineage of Q-BA-MAZE can be traced back to some long ago Swiss ancestor.

JB: What role did rapid prototyping technology play in the creation of Q-Ba-Maze? Could you have done it without this tech?

AC: Rapid-prototyping made it possible to physically test each new generation of the cubes by building with them and rolling balls through. The design evolved in response to the lessons of each RP generation. The first design generation of the double-exit cube had a polygonal interior. The final design has an hour-glass shape inside, which is the result of the intersection of a sphere and a torus offset by the smallest fraction of an inch. The way the rolling balls can hesitate for several seconds before deciding which way to exit is a result of this final geometry. Only because of rapid-prototyping could the design fully mature in this way. 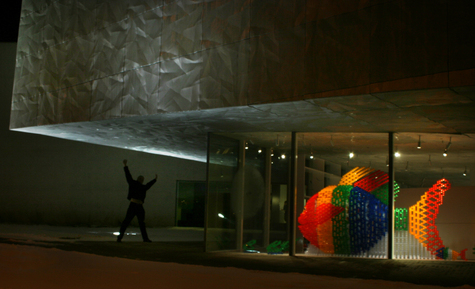 JB: Tell me more about your installation at the Walker.

AC: We wanted to push the limits on what could be done with Q-BA-MAZE. So we put together a small team of current and recent architecture and sculpture students and had some brain storming sessions. The fish idea came out of that. Building the big fish was a group effort with about seven of us building it at the same time at one point. The small fish appeared behind the big fish partly because we did not have enough room for everyone gathered to work on the big fish.

JB: What kind of plastic are Q-BA-MAZE cubes made of? Did you try out many different materials before setting on the final one?

AC: I researched a number of materials for the cubes before choosing polycarbonate for its durability and beautiful clarity. Hockey facemasks and bulletproof glass are made with polycarbonate and I wanted to bring that level of strength and resilience to the cubes.

JB: On your blog you mention how Q-BA-MAZE recalls the modular construction of certain buildings. Describe how your architectural background manifested itself in the toy as you developed it.

AC: My most important design lesson came one day while working for the architect Kevin Roche. I showed him a model of an atrium with a tricky roof detail. He resolved the issue instantly, to my amazement, and then said, “Andrew, let the building design itself.” With this, I learned to take a step back and read what a design “wants to be.” So with the design process of Q-BA-MAZE, I just let the natural logic of the modular system unfold.

JB: You mentioned LEGO more than a few times on your blog. Tell me about what LEGO bricks meant to you as a kid.

AC: I played with LEGO constantly as a kid. My favorite thing was to push the limits of absurdity, designing cars with impossibly long tails, or multi-story airplanes. I see play and design as two facets of the same thing, so I’d say my childhood LEGO play continues with my design work as an adult.

JB: What does Q-BA-MAZE teach people who work with it?

AC: The interconnection of play and design. Architectural, sculptural and engineering principles. The relationship of form and color. Cause and effect. Spatial reasoning. Physics. Balance. Proportion. Symmetry. Probability.

JB: Tell me about how you converted regular old Microsoft Excel into Q-BA-CAD, a grassroots CAD utility for creating and sharing cube designs.

AC: This question comes back to my childhood LEGO play. It was always kind of a disappointment to have to dismantle a cherished design. By making it easy for people to record their Q-BA-MAZE designs in the computer, they can always build a design again in the future.

I got a thrill when I walked into a friend’s office and saw that he had built three of my Q-BA-MAZE structures from plans I had emailed him. I think other people will have a similar thrill in being able to share their designs. The problem is that CAD software can be expensive. Since this is the era of the mash-up, it is a natural to combine Q-BA-MAZE and Excel because both are based on grids. Since just about every computer is loaded with Excel and people can download Q-BA-CAD plans from the internet, it is possible to provide people with a free system for drawing, saving, printing, and emailing their plans.

JB: There are three different cubes that ended up in the final Q-BA-MAZE product. Are there others that didn’t make the cut? Might we see them in the future?

AC: I chose the three most useful and versatile of the cubes. There is a beauty and an infinity within this simplicity. Just a few weeks ago, for example, it had never crossed my mind to make a fish out of Q-BA-MAZE cubes and now we have a giant fish installed at the Walker Art Center and have just added five fish designs to the plans page on our website.

JB: What’s next for Q-BA-MAZE?

For more information see the Q-BA-MAZE web site and their blog.

Here is a cool video of the toy in action: 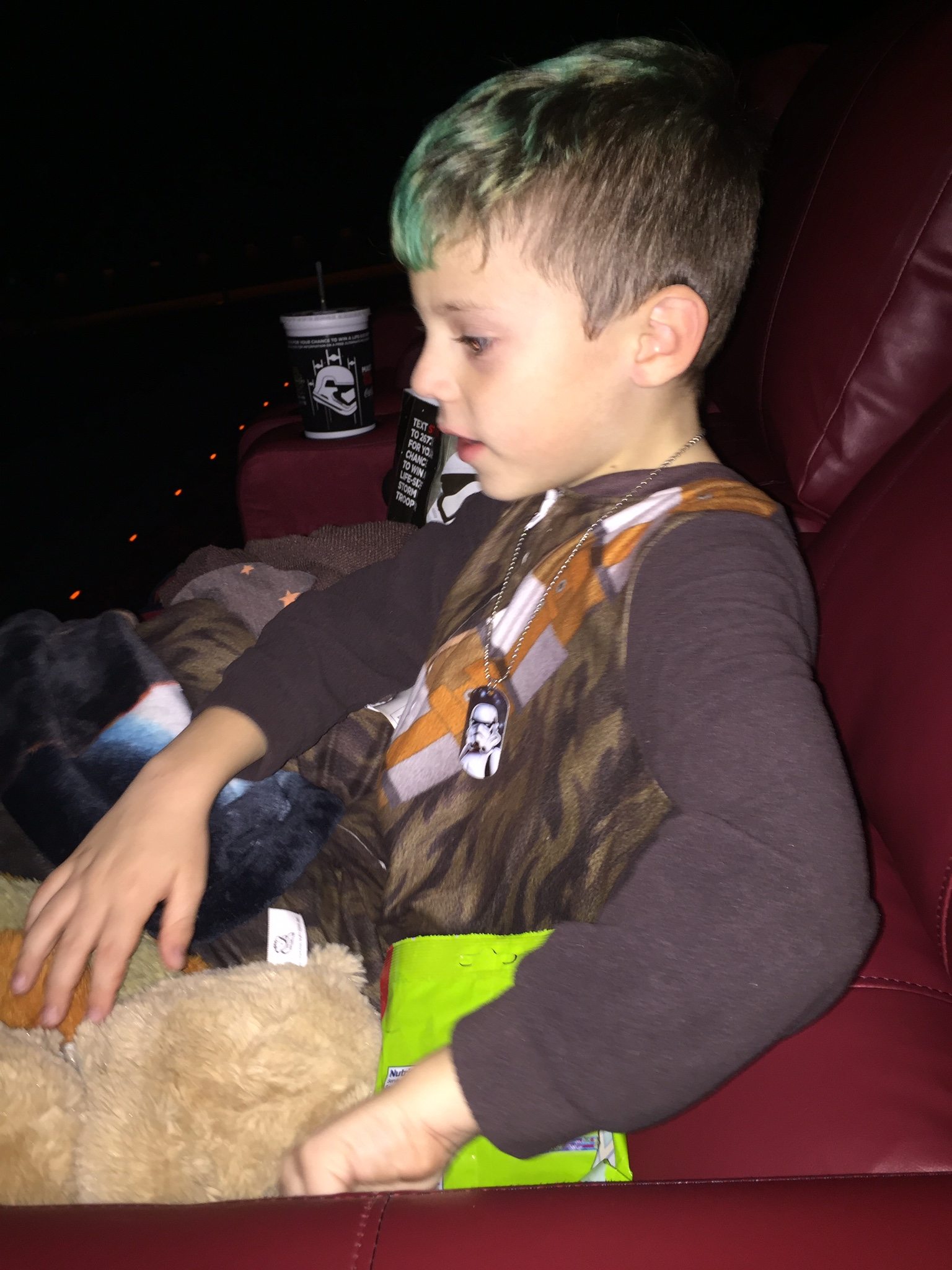 Is ‘The Force Awakens’ Okay for Younglings?