My son, Adian’s, kindergarten class was learning about three dimensional shapes and objects last week.  His teacher opted to bypass the usual visualization tools (Tinkertoys, LEGO, K’NEX, etc…) and used marshmallows and toothpicks instead.  This actually worked out pretty well.  The toothpicks can be stuck in pretty much any which way and the whole thing eventually hardens to a surprisingly strong finished product.  Can’t really beat the economics of the supplies either, although I’m not sure how she got little pointy wooden sticks past the same school board that’s removing playground equipment because of insurance liability issues.  But I digress…  Aidan brought home his creation and I think it’s a pretty complex little model for a five year old. 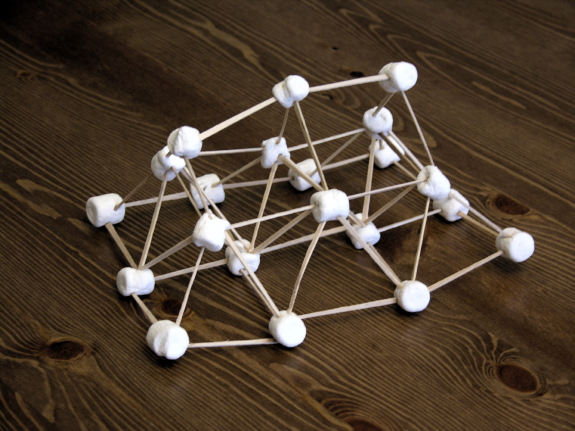 I was curious about the possibilities inherent in this technique (what can I say, it’s been a slow week), and had a look around the Internets.  Turns out, there’s quite a community of marshmallow builders out there.  Not just primary school kids and their teachers, but engineers and MBAs seem to be rather taken by the marshmallow challenge.  Who knew?

Here’s a Toronto marshmallow and toothpick building contest, for example, or how about marshmallow molecules?

Once I started digging into the hidden realm of marshmallow-related activities, it became more and more difficult to ignore the cooler (I mean darker) side of the web.  Of course, I can only be referring to the Laser Guided Marshmallow Blaster and its ilk.

A link to instructions for building a variation on one of these devices was posted last year by Geekdad’s Bruce Stewart.  If you don’t feel handy with the PVC, there are even companies that specialize in ready-built marshmallow armaments.

Apparently you can eat these things too, but that doesn’t seem to be as much fun…

Comics Spotlight on Toy Boy What Happens in Vegas Special