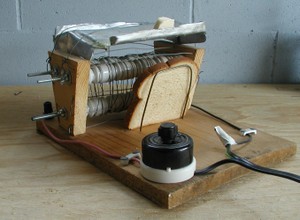 Happy Inventor’s Day! Coinciding with Thomas Edison’s birthday (Monday is his 161st) February 11th was designated by Congress as a commemorative day to honor America’s inventors.

Coincidentally, fellow Twin Citian William Gurstelle, contributor to MAKE Magazine and author of a series of geeky DIY tomes (Whoosh Boom Splat: The Garage Warrior’s Guide to Building Projectile Shooters is his most recent) posted in his blog a description of a science fair project his son Andy had created years ago.

He thought about it for a while and, after various aborted attempts and blind alleys, came up with the idea of a self-buttering toaster. What a brilliant idea from such a young person! (I readily admit my fatherly bias.) The device Andy designed was intricate yet simple: a wood and steel construction that held a slice of bread at an angle in front of a carefully wound matrix of nichrome wire heating elements. While the bread toasted, the heat from the wires melted a glop of butter on a perforated metal holder positioned over the bread. The butter dripped through the holes and on to the toasting bread. Voila! There was a slice of automatically buttered toast. By my lights, this was a pretty terrific invention for a sixth grader.

Unfortunately, Andy’s toaster (pictured above) didn’t win — the top prize went to a kid who made an outfit for her pet hamster. How many brilliant inventions have been overlooked over the years? How many would-be inventors were discouraged early on and never found their true calling? Well, for all of you out there, today’s your day.

Plugged or Unplugged? Given the Choice, Will Kids Opt for a Balanced Summer?