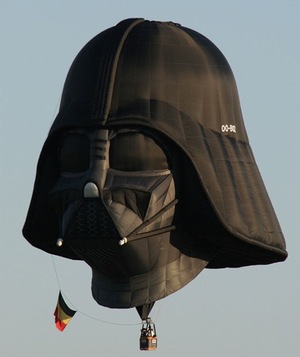 Hot air is nothing next to the power of The Force. Belgian Benoît Lambert has taken his Star Wars fandom to new heights and created and launched a Darth Vader-shaped hot air balloon to strike fear into the hearts of the Rebel Alliance.

To keep this project secret on Lucasfilm request, the English manufacturer called it "Head One". This name allowed us to keep the project secret until the balloon’s first public appearance, and was also used for the official Belgian registration.

What are Boba Fett and that Stormtrooper thinking anyway?

Phineas and Ferb Breaks the Mold With a “Time Shift Weekend”