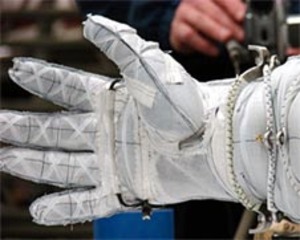 Reader Adi sent in this story from earlier this year about engineer Peter Homer who won the NASA Challenge to design and build a better astronaut’s glove.  The GeekDad angle on this one is that:

Homer involved his three children, ages 15, 11 and 6, in the challenge.
His 14-year-old son Matthew documented the project with videos and photos and accompanied his dad at the competition. "One of the things I wanted to show them is that if you set your mind to something, you can do just about anything," he said. "I didn’t know if I was going to win the contest or not, but I wanted them to see me see it through."

That’s the GeekDad ethic in action!  Read more about the story here, including the video his son shot.