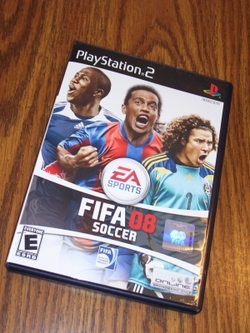 Hats off to Electronic Arts for continuing to develop for the PS2.
The newest edition to the FIFA series is FIFA
08 — a challenging, fun way to play the beautiful game – where you can be part of over 570 different teams from around the world.
EA took a favorite and found a good balance on improving the game while not alienating the long-term, hard-core fans.  Changes to FIFA
08 are centered around controls and modes of play.  Full disclosure:
I did receive a copy of FIFA 08 for evaluation.

The primary change on the controls is a manual addition.  You can manually target where and how powerful to make the passes, kicks, and crosses.  If you’re playing against another human (instead of the computer), you can also freeze the screen and change the position of the throw-in and goal kicks to surprise your opponent.

The play modes have the standard challenges and tournaments from previous versions.  A couple of new modes that I had not seen before were the manager mode where you manage the team and the newest mode:
Be A Pro Cooperative Mode.  In cooperative mode, you and up to three other people set up players to play as part of the same team.  The better you play the better your player becomes throughout the season as you gain a series of upgrades.  For me, the best addition is the cooperative mode.  Other Geekdads have mentioned this as a welcome trend in the world of video games.

The GeekDad in me put this game in front of my boys who totally love
FIFA 2001 (when Beckham played for Manchester United before he went to Real Madrid before he went to the LA Galaxy…but I digress) and I put this in front of them without instruction or help to see how they would do.  My younger son got a bit frustrated with the array of menus and multiple steps for setup; he just wanted to play!
My older son did a good job of navigating the options and setting up a game for the two of them. The boys for now prefer playing head-to-head because they have found, as have I, that the AI in this game is tough.  I’ve played several games and have yet to win against the computer.

All in all, FIFA 08 keeps what has made this a successful set of games over the years but has found new ways to keep the excitement.
It is a challenging game with a lot of flexibility for how you play.

The Great Bacon Odyssey: Bacon, the Other Crispy Brown Meat

Dealing with Bullies: Kids and Cruelty