We made our annual Thanksgiving Day trek to the Toronto Zoo last week (I live in Canada- we still have turkey, but we like to cook it before the snow hits) and one of the big highlights of the trip for the kids was the Dinosaurs Alive! exhibit.

Housed in a large dome, the exhibit consisted of a dozen or so life-sized, animatronic dinosaurs, including a towering Tyrannosaurus Rex. As an adult who’s been spoiled by too many photorealistic CGI dinos, the appearance of these life-sized beasts with their latex skin and limited motion was a little bit of a letdown. Pretty realistic, especially from a distance, but obviously not the real thing. The sheer scale of them did hit me, though –I’ve seen my fair share of dinosaur skeletons posed in museums, but something of their size gets lost in the translation. A life-sized, fully fleshed-out and reasonably realistic T-Rex is something I haven’t seen before and I have to admit, looking up at that thing made me feel very glad I didn’t live 65 million years ago.

For the kids, forget it. This was seeing dinosaurs. The Tyrannosaurus Rex was the big hit, but the Triceratops also made quite an impression, again because of the size thing; after seeing the zoo’s elephants wandering around, the Triceratops seems even more of a tank than it ever did. There are small stations explaining fossilization and some bones to be found, but really, it’s all about the ten minutes you spend walking around and gawking (mostly up), then running the gift shop gauntlet afterward. Warning: There are signs posted about the fright possibility and I did see a number of younger kids screaming and trying to escape.

Unfortunately, Canucks are out of luck for now- Dinosaurs Alive! has wrapped up its showing at the Toronto Zoo, but if you live in the Mckinney, Texas area, the exhibit is opening at the Heard Museum for a run from October 19 through February 3, 2008.

Here’s a shot of the T-Rex. 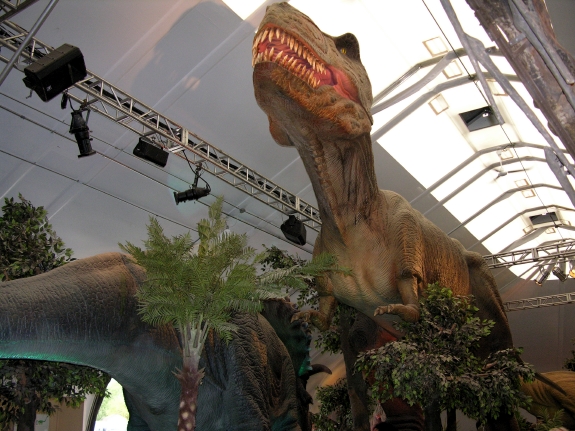