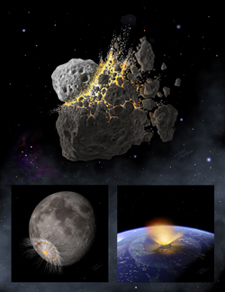 The website physorg.com discusses the results of a study suggesting that a breakup in our solar system’s asteroid belt created the meteors that eventually killed the dinosaurs.

At approximately 170 kilometers in diameter and having characteristics similar to carbonaceous chondrite meteorites, the Baptistina parent body resided in the innermost region of the asteroid belt when it was hit by another asteroid estimated to be 60 kilometers in diameter. This catastrophic impact produced what is now known as the Baptistina asteroid family, a cluster of asteroid fragments with similar orbits. According to the team’s modeling work, this family originally included approximately 300 bodies larger than 10 kilometers and 140,000 bodies larger than 1 kilometer.

Some of these bodies eventually found their way into the inner solar system and pummeled the Earth and the Moon. Some interesting geological study here, suggesting that it was a continuous bombardment over much time that created the conditions for dinosaur extinction. My 4-year-old dinophile geeklet loves regaling anyone who’s interested about "how the dinosaurs died." Now dad’s got his back with some ultra-current info!

Want a Pair of Gunnar Glasses? Go to Best Buy — or Enter Our Giveaway!