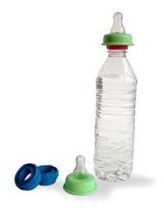 The New York Times has a great feature up today on dads who develop inventions based on their parenting experiences. From the article:

In the history of child care products from strollers to the odor-eliminating disposal known as the Diaper Genie, plenty have been dreamed up by men and women alike. But as more fathers have taken hands-on roles in child rearing, tackling some of the grittier and more odiferous chores of parenthood and even becoming stay-at-home dads, their inventions are increasingly inspired by personal experiences like
Mr. Habeeb’s. In many cases they are designed specifically for fellow fathers.

“We’ve definitely seen an increase,” said Amy Chezem, a spokeswoman for the Juvenile Products Manufacturers Association, a trade group for an industry that sells $7.3 billion worth of merchandise annually. “A lot of that has to do with the fact that dads are a lot more involved now than they were even a decade ago.”