For the past few months, my kids’ response to "Where do you want to eat?" has always been "THE DINOSAUR RESTAURANT!!!!!" With that decision already made, I recently packed up the car and prepared to head far back in time. Sort of.

The dinosaur restaurant, or more accurately, T-Rex, is a brand new concept from the folks that brought us The Rainforest Café. Currently, the only T-Rex is found across the street from the Kansas Speedway in Kansas City, Kansas. (A second is in the works in Orlando, with a third planned for somewhere on the west coast.) The restaurant follows the same idea as the Rainforest Café, with lots of imagery, animatronics and, above all, retailing. (For more detail, view the video after the jump.) 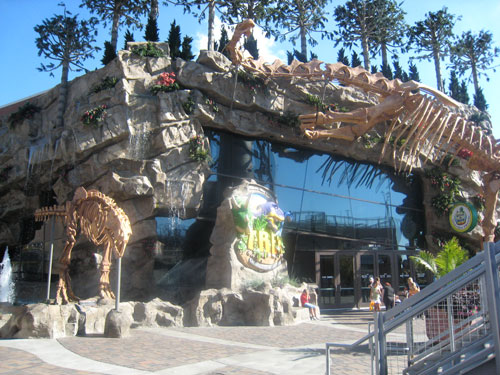 T-Rex is located in the middle of the Legends shopping center and it’s tough to miss – replete with smoke, spalshing water, recorded roars and several replicated dinosaur skeletons. Open the door to step inside and you’re immediately greeted by a growling, protective tyrannosaurus mother and her hatchlings. (On our first visit, my five-year-olds immediately ducked behind me, unsure what to make of this beast.)

Lots of thought has been given to the décor and there are many varieties of dinosaurs, spanning many eras, throughout the restaurant. On this trip, our table is wrapped by a triceratops’s tail. From the ceiling close by hangs a pteranodon, near it is a wooly mammoth and its young. Faux rock covers many walls and there’s plenty of plant and (as far as I could tell) fake insect life.  The bar has an aquatic theme, anchored by a huge octopus hanging from the ceiling. There’s a large salt water aquarium and guests can sit in gigantic clam shells, while jellyfish lamps light their table.

A trademark of The Rainforest Café is the multimedia thunderstorm that takes place every 30 minutes. Similarly, T-Rex has a meteor shower representing the dinosaurs’ demise every half hour, which seems a little odd – having an earth-changing catastrophe interpreted as a fun family event. Nevertheless, everyone seems to enjoy it.

The menu is dressed up with lots of silly dinosaur-named dishes (Bronto Burger, Ceasarsaurus Salad, etc.). And while kids enjoy the dinosaur shaped chicken tenders, the food leaves a little to be desired for a more sophisticated palate.

T-Rex’s slogan is "Eat. Shop. Explore. Discover." Having tackled eating and exploring, we move on to shopping and discovering.

Continue reading and watch video after the jump

The gift shop has nearly as much floor space as the restaurant and seems to be doing very brisk business with virtually every dinosaur related product you can think of. Additionally, the Build-a-Bear franchise has created a specialty shop just for the T-Rex restaurant, Build-a-Dino, where kids (or adults) can create stuffed dinosaurs and dress them with a seemingly endless inventory of accessories like overalls, ball caps and cell phones.

Hoping to keep the contents of my wallet from becoming extinct, I herd the kids towards the discovery portion of the restaurant. For a few dollars, we are granted access to an area where we can dig up a dinosaur skeleton. Equipped with paint brushes, we push coarse sand away from a permanent skeleton model attached to the floor. A secondary exhibit shows some large geodes and fossils. The area is rounded out with some interactive touch-screens.

Our experience complete, we head for the car and our return to the Holocene period. All in all, it was a fun afternoon and (most importantly) one that the kids thoroughly enjoyed. The restaurant trip has sparked several conversations about dinosaurs and started us on some further research … and that makes the trip completely worthwhile to me.

If you have the opportunity to visit this T-Rex (or one of the future locations), go and have fun … it’s certainly a good experience. 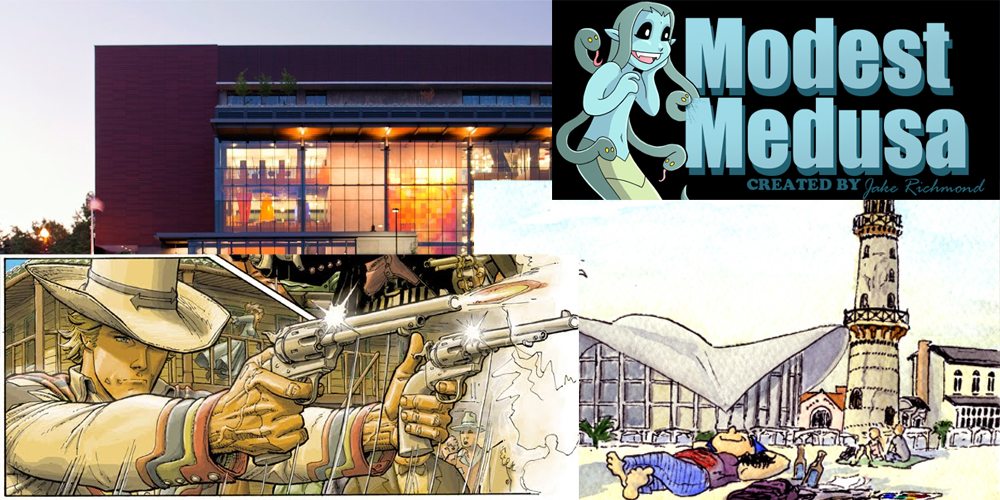