Games that we especially like, which we want to specifically call out to readers, should receive Approved status. This is, essentially, our seal of approval. Once a year, we take all Approved, commercially-released games from the current year and select ten to be our nominees for Game of the Year. From that group, we select a Chosen One that is Game of the Year.

Game of the Year Eligibility

Games that we deem eligible for Approved should be accessible to most families (no objectionable theme or content). While any player count, difficulty, length, etc. may be Approved, as we move to the Game of the Year selection, games that are restrictive in any way, for instance, two-player-only games, may be eliminated from consideration. Any writer may nominate a game to be Approved, but the game’s review must follow the template and be substantial enough to justify an Approved designation.

A game may receive Approved for a calendar year if it is received and reviewed in the year that it is published. The time period for this consideration is from the conclusion of nomination from the previous year to nomination of the current year, generally late November. This Approved designation carries that year’s date on the seal (e.g. 2022) and is eligible for that year’s Game of the Year nomination and award.

After nominees are announced, up to four of the most active reviewers will get together at an agreed location and play all nominees before deciding on a single winner as Game of the Year. This will take place sometime in late November or early December, with the Game of the Year announcement coming a few weeks later.

Kickstarter and Back Catalog Games

A game may receive Approved without a year designation if it is received and reviewed outside the year it was published. This applies to back catalog games that were not reviewed in the year that they came out. It may also apply to crowdfunded games that are in the funding stage. The reason for this is that we can not vouch for the components until a crowdfunded game has shipped to backers, but we want to alert readers to a very good game they ought to consider backing. A crowdfunded game may be re-evaluated after receiving final components and resubmitted to receive an Approved status with a year designation, making it eligible for Game of the Year voting, so long as a “Reaping the Rewards” follow-up post is run on the site.

To apply for the Approved status, you must alert the Games Editor. Your review should justify why the game is worthy of wearing the Approved seal. A smaller version of the logo should be placed on the featured image, as shown below. (All logos are at the bottom of this article.) Additionally, posts must include the HTML block, located further down the page, with appropriate updates.

All Approved games must use a featured image that includes the appropriate GeekDad Approved logo.

In order for the logo to show up on social media posts, please make the visually important portion of the image (often, the game’s box, although that isn’t required) fit into an area that is 1200px by 675px. Place the Approved logo in either the top right or the bottom left of the image, 30px from the edges. Try to place the logo where it will have sufficient contrast to be easily visible on the image.

Then, add letterboxing above and below the image so that the final image size is the 1200px x 900px required by the GeekDad site. 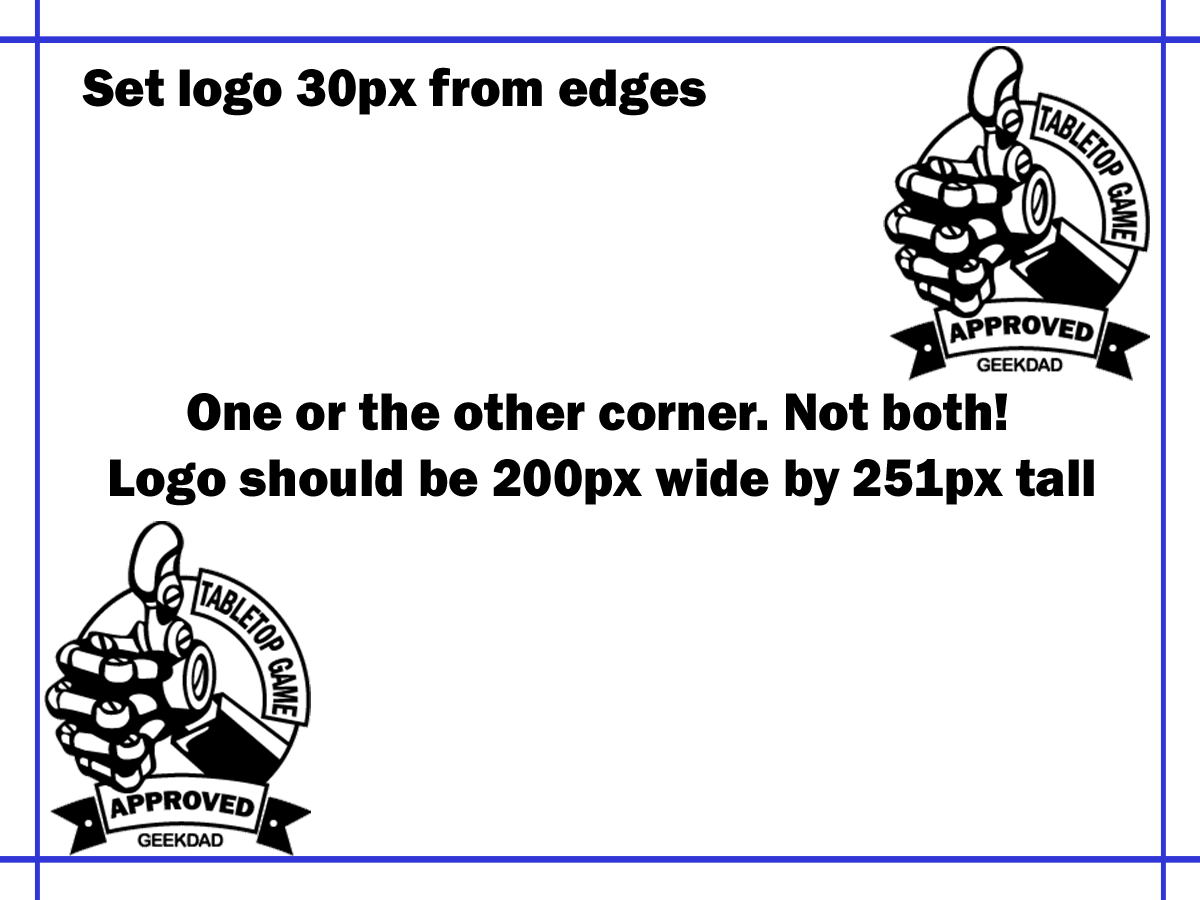 Only games that have been Approved for the current calendar year may be nominated as Game of the Year. All active game reviewers will be allowed input on deciding nominees. The final nominee list is at the discretion of the Games Editor.

Approved seals are made available to publishers at no cost and may be used as the publisher desires. Nominees and the winner of Game of the Year carry a nominal marketing fee. Seal art may not be altered in any way.

Images can be found here:

Generic Approved logo (no year) for featured images on games that were released in previous years or games currently seeking funding on Kickstarter.

2023 Approved logo for featured images on games that qualify for current GotY (must be published in the current year and be availabled at retail.)

High Resolution Generic Approved logo (no year) for sharing with publishers of games that that were released in previous years or games currently seeking funding on Kickstarter. It’s strongly recommended that you send this with a note (see below) to Kickstarter publishers and ask that they add it to the campaign site.

High Resolution 2023 Approved logo for sharing with publishers, games that qualify for current GotY (must be published in the current year and be available at retail.) Please share this with publishers (see below) and urge them to use it on marketing sites and materials at no cost to them.

In-post, stand-alone generic image (no year) for announcing Approved for games that were released in previous years or games currently seeking funding on Kickstarter. Note that this is different from the one in the template, so please replace it as needed.

In-post, stand-alone 2023 image for announcing Approved for games that qualify for current GotY (must be published in the current year and be availabled at retail.) This image is already in the template and is provided here just in case it is accidentally deleted.

Posts for 2032 Approved games should include the following HTML block with appropriate game name and image. This is already in the template:

Lastly, you should email the publisher to let them know about your review and this honor. Feel free to use the following as a template:

As you probably saw, we reviewed your game, <GAME TITLE>, and we liked it so much, we added it to our “GeekDad Approved” list of games. Please let me explain what that means. You are free to use the Approved logo in any marketing you do and I’ve even linked to a high-resolution copy of that logo for you today. The logo will appear on the review of your game and will also appear next to your title, immortalized in our Game Review Index: https://geekdad.com/tabletop-game-review-index/

Additionally, being on the Approved list also makes <GAME TITLE> eligible to be considered for our <CURRENT YEAR> Game of the Year. We’ll be working on that honor later this year, but in the meantime, thank you — and thanks for making such a great game.

For current Kickstarter campaigns, use something similar to the following:

As you probably saw, we reviewed your game, <GAME TITLE>, and we liked it so much, we added it to our “GeekDad Approved” list of games. Please let me explain what that means. You are free to use the Approved logo in any marketing you do, including on the Kickstarter campaign site, and I’ve even linked to a high-resolution copy of that logo for you today. The logo will appear on the review of your game and will also appear next to your title, immortalized in our Game Review Index: https://geekdad.com/tabletop-game-review-index/

Once the campaign is over and you have finished production, we’d like to ask that you provide us with a completed copy of the game. We will run an updated review, including new high-quality photos of the finished components, and potentially nominate your game for our prestigious Game of the Year award.

For a nominee of Game of the Year, or the eventual winner:

As you probably saw, <GAME TITLE> was named one of our GeekDad Approved games this year, which automatically made it eligible for consideration for Game of the Year. I’m very happy to inform you that the game has now been named as one of the ten nominees for this prestigious award. When the game was initially reviewed, you should have received a copy of our GeekDad Approved logo, which you are free to continue to use in any marketing you do, including on the Kickstarter campaign site.

If you wish, we can also provide you with a higher-resolution, print-ready badge to use on physical marketing pieces, including the box of future printings of the game, advertising at conventions or other events, or any other physical media. We do, however, ask for a one-time payment of $300 for the use of this badge, which will grant you a non-expiring, non-exclusive license to use the badge on physical marketing materials. You can reach out directly to our Tabletop Games editor, Rob Huddleston, at rob@geekdad.com to get more details or to arrange to get the badge for print.

Thank you, and again, congratulations on the nomination of your game for Game of the Year.