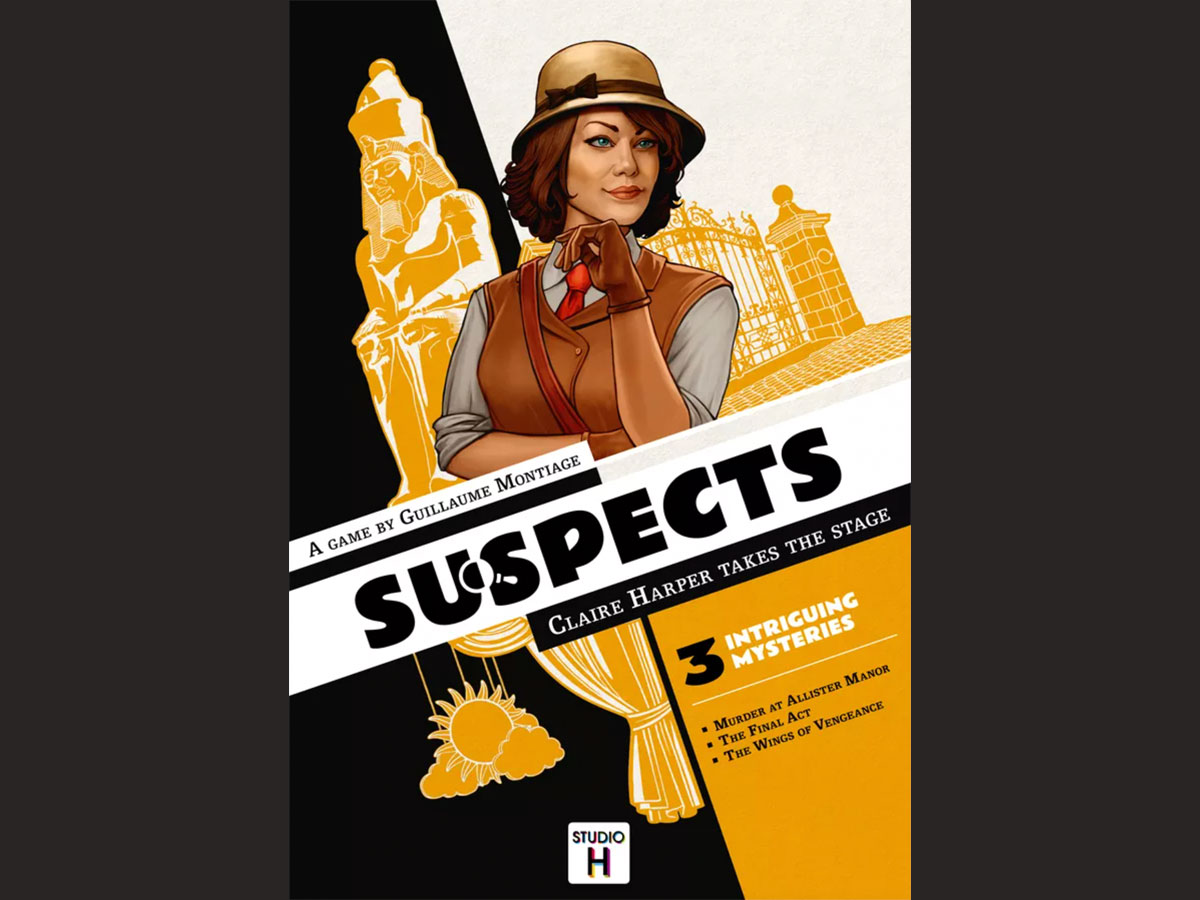 (Note: While this review avoids spoilers for the mysteries, I do include photos of some of the components, but have only shown text that you would normally see very soon after starting a game.)

Suspects is a mystery-solving game for 1 to 6 players, ages 10 and up, and takes about 90 minutes to play per chapter. It retails for $29.99 and is available in stores and online. Because of the cooperative nature of the game, there’s not really a specific limit to the player count; more players means more people to share the reading of cards and decisions to be made, but as with other mystery games, sometimes too many people can feel like a crowd. The box says 10 and up; the game rules are pretty easy to grasp, so it’s more about the content. Obviously, it’s a murder mystery game, and though it’s not overly gruesome or explicit, the mysteries do involve things like infidelity, drunkenness, and various motivations, so you can decide whether your kids are old enough for that.

The box comes with three mysteries to solve, each with its own set of components:

The introduction card for each chapter has a bit of story, presents you with the two documents, and also includes a questionnaire so you know what answers you’re looking for.

The documents themselves are mostly single pages (with the exception of the playbill, which is a folded sheet), and they’re designed to provide you with some information about the mystery while also helping to draw you into the setting. For instance, the playbill is supposed to look like an artifact from the story, but the various names on the playbill are numbered, indicating that you can have conversations with certain people.

The cards are large, tall as tarot cards but wider, which helps to showcase the polished illustrations as well as allow plenty of room for text. Since this is where you’ll be reading most of the story, there’s a lot of text on some of the cards as you get statements from the various characters involved.

How to Play Suspects

The goal of the game is to solve the mystery—more specifically, to answer a set of questions using as few clue cards as possible. You play as Claire Harper, a young woman with a growing reputation for solving mysteries.

To begin, choose a chapter and set out the deck of clue cards, the introduction, and documents. (Set the solution envelope aside.) The introduction page has a story to read aloud to set the scene, and will instruct you when to reveal the two documents and the first card.

Make sure you have a pen and paper or something to take notes.

You can pursue your investigation in whatever order you like. Anywhere you see a number on a document or card, that’s a thread you can follow by finding the corresponding card. For instance, if you’re looking at a map, the cards will be specific locations that you observe. If you talk to a person, their card may offer a few options for continuing the conversation. Some locations will have items that can be examined.

Keep track of how many cards you have drawn.

At any point in the game (but particularly when you hit certain thresholds of cards drawn), you can stop to answer the questionnaire on the introduction sheet. The questions will include the obvious—”who is the murderer?”—as well as other things that may come up during the course of the investigation. You may change your answers to these questions as more evidence is revealed, but you should keep track of how many cards were drawn at the time an answer was changed.

The game ends when there are no more clue cards left. You may make your final answers to the questionnaire at this time, and then read the solution sheet in the envelope to see how you did.

You will earn points for correct answers based on how many cards had been drawn at the time you wrote down the answer. For instance, if you get the correct answer to a question within the first 30 cards, it’s worth 5 points. But if you wait until you’ve seen the entire deck, it’s only worth 3 points. (Incorrect answers are worth 0 points, regardless of how quickly you gave the answer—you don’t get credit for being fast if you’re wrong!)

At the end of the solution sheet, there’s a section that tells you the results based on your score. If you did well, you’ll have a slam-dunk case where the suspect is caught and Claire earns accolades for her work. Do poorly, and the culprit gets away with murder.

Why You Should Play Suspects

I really enjoy mystery games, whether they’re literally murder mysteries or are escape room–style games. Looking at clues and piecing them together to figure out the solution is a lot of fun for me, so I’m always interested in trying out new games in this genre.

Suspects is less about secret codes and logic puzzles, and more about figuring out people (plus some attention to detail in examining objects!). Not everyone is going to be honest with you, so you have to figure out who’s lying and who’s telling the truth. Some people aren’t guilty of murder but have other things they’re trying to hide. As the tips in the rulebook say, it’s important to use deduction and evidence rather than your gut instincts.

The game is set in the 1930s, so that restricts the sort of information you have access to. Sometimes you’ll have to wait for information—a character who shows up later, for instance, because there’s no easy way to get in touch with them sooner. You don’t have access to any fancy CSI tools—at best you can compare a footprint with somebody’s shoe size. I’ll also note that there’s not much diversity in the characters: although there are men and women, almost everyone is white except for a couple people in the last chapter, which takes place in Egypt.

No matter what order you choose to follow the clues, you’ll get to read just about all of them by the time the game is over, so there’s never any information that you’re missing. That’s an interesting aspect, that what you’re doing is figuring out the optimal order to follow the clues, because some paths will take longer to arrive at the real answer than others. Your real goal is to find the answers as quickly as possible, and reading more cards after that simply gives you the opportunity to confirm or revise your earlier guesses. (There are a few times where making one decision will shut off a particular path of inquiry, but that doesn’t happen too often.)

Since you have the questionnaire right from the beginning, that gives you an idea of which threads to pull, but even then sometimes it can be tricky to figure out who to talk to or where to go next to get at that info. If you think you have an answer to a question, do you try to corroborate that with another witness first, or work on a different question before you hit the next cards threshold?

We played through all three mysteries, and we did fairly well on two of them, but accused the wrong person on the third! The funny thing about the scoring system was that because we got the right answers early on for some of the other questions, we still got a good enough overall score that the culprit was arrested. That felt a little bit off as far as the epilogue was concerned, but it’s because all of the questions are worth the same score—figuring out the murderer isn’t weighted any more than the others.

Of course, each chapter in Suspects can only be played once (unless you have a terrible memory). It’s not really the sort of thing you would play again to try to improve your score, because you’ll have seen all of the cards and can pretty easily avoid red herrings or distractions. However, nothing gets destroyed or marked up, so it’s easy to put all the cards back in order if you want to pass the game along to a friend for them to try.

Overall, I enjoyed puzzling out Suspects and following the story of Claire Harper. The way you can follow clues felt a bit like a Choose-Your-Own-Adventure book except that you can travel back and forth to any branch in the path as you like. I hope there will be more Claire Harper mysteries to solve in the future!

For more information, visit the Suspects page on the Hachette Games website! 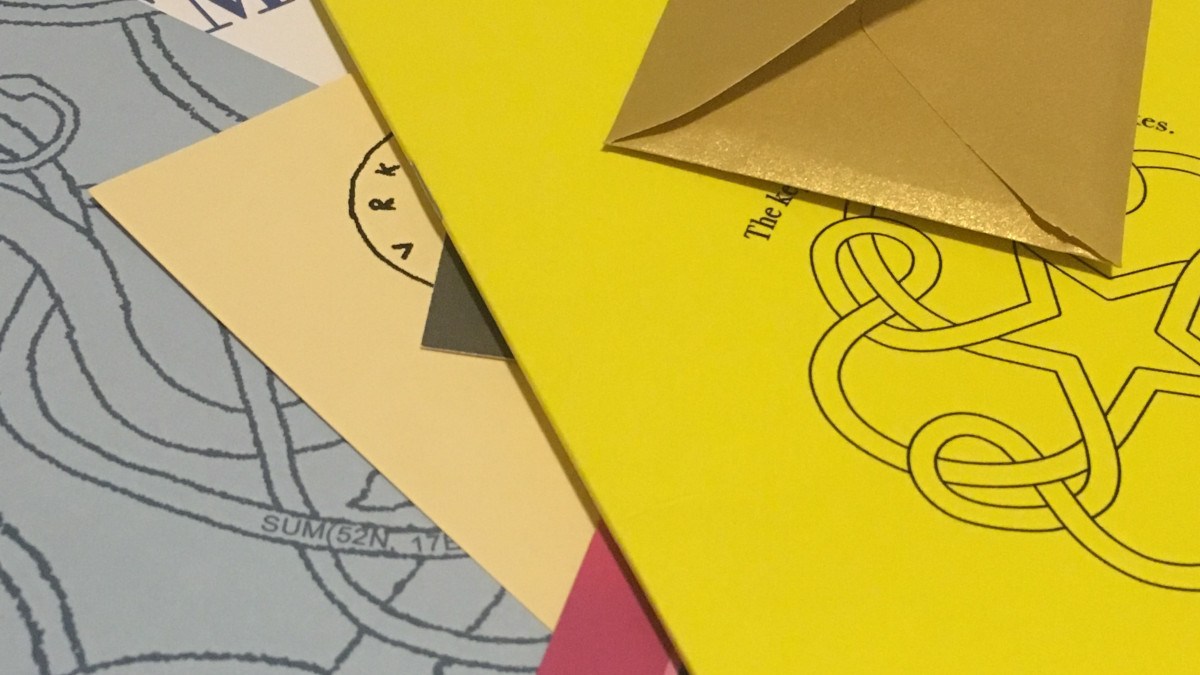 Step Into an Ancient Mystery With ‘The Tale of Ord’ 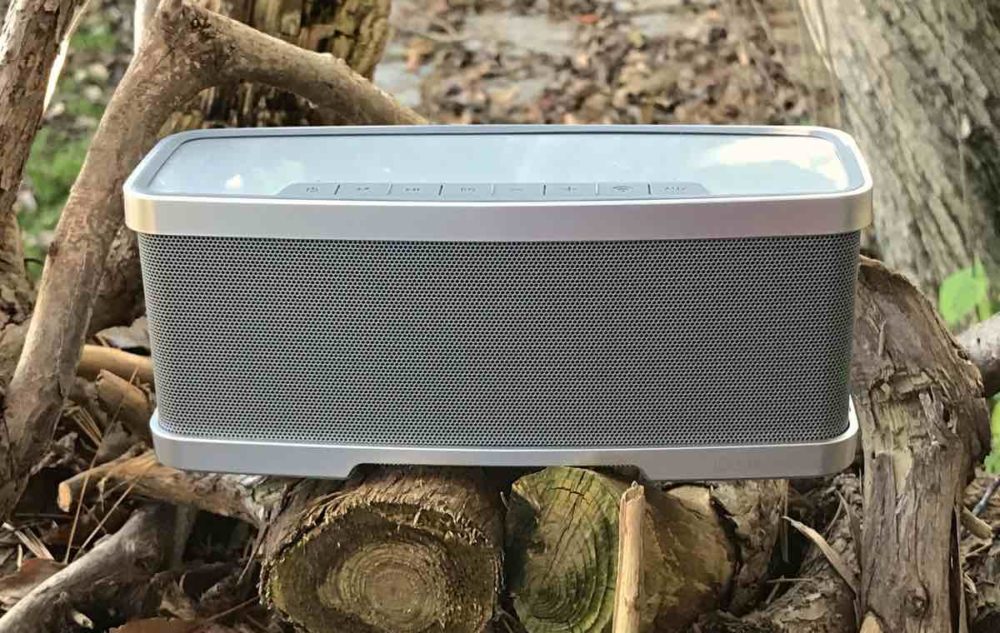