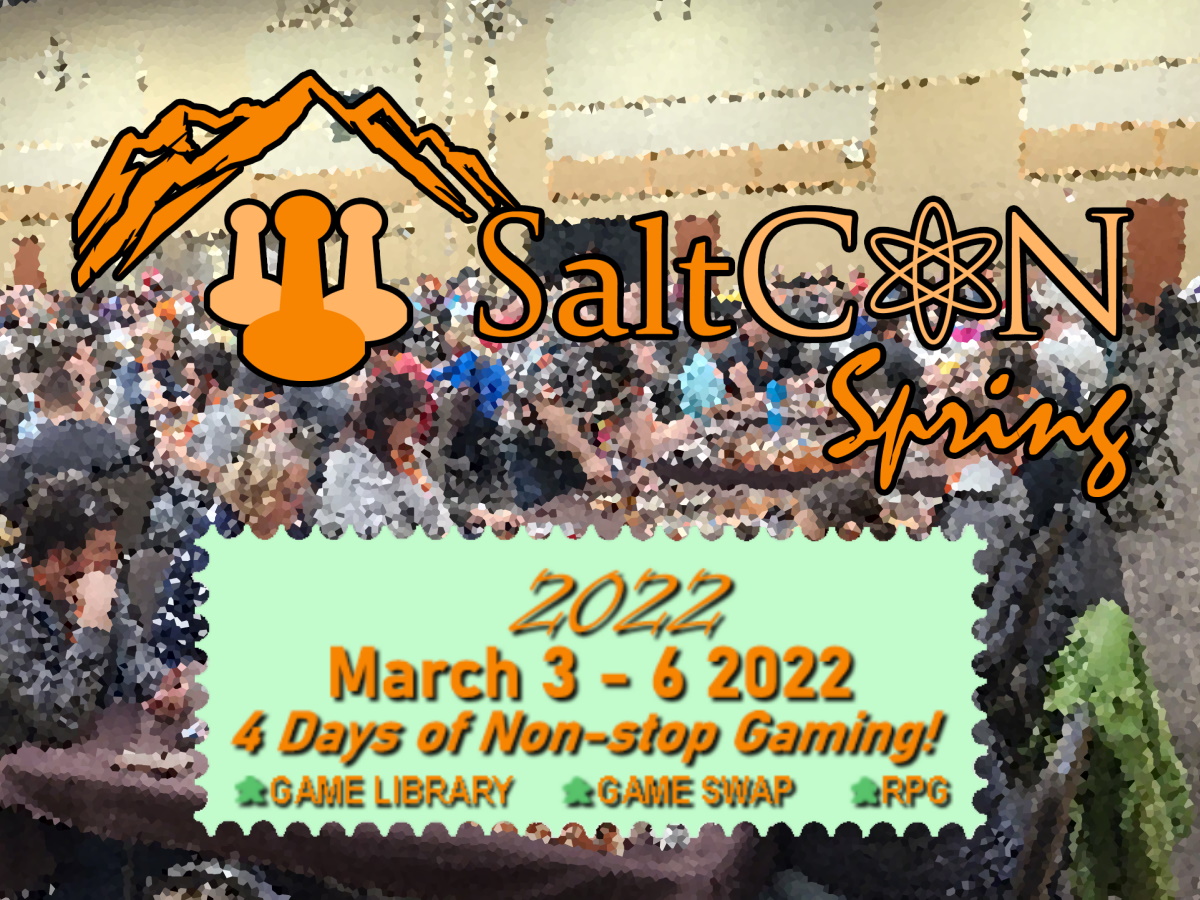 SaltCON Spring 2022 in Layton, Utah is the premier gaming convention in northern Utah, and the biggest of SaltCON’s several events they hold each year. Estimated at nearly 2,000 attendees, it is Utah’s largest board game convention, and it was back in full force from Thursday, March 3, 2022 to Sunday, March 6, 2022. The overall atmosphere was one of enjoyment, with all of the attendees there to have a great weekend playing board games and role-playing games.

SaltCON is held at the Davis Conference Center in Layton, Utah, which is about 30 minutes north of Salt Lake City, Utah. It is a terrific location, centrally located with a hotel connected to the conference center and many others in the area. I personally live 20 minutes away, so did not spend the night on location, but many people did, from both near and far, to enjoy all-night gaming and early starts the next day. The facility is all on one level with two large rooms, plus several smaller rooms for different events.

The conference is spread throughout the convention center, using the space very well. Upon entering on Thursday morning, I was greeted by volunteers checking everyone in. I saw smiles all around and both the volunteers and attendees were happy to help orient newcomers and answer questions.

I spoke a few times with Dale Gifford and Dan Naylor, two of the organizers of SaltCON. They were both very open to speaking to attendees and making sure their experience of SaltCON was as good as it could be. It was interesting to learn the history of the convention, stemming from an event known as A Gathering of Strangers at the University of Utah. It was officially rebranded as SaltCON in 2010 and found its current home at the Davis Conference Center in 2014.

The Events at the Convention

I’ve been to a lot of geek/pop culture conventions, but I only started going to board game conventions right before COVID, so that tells you how many of them I have been to! So when I felt went I wasn’t quite sure what to expect. What I found was a lot of fun and a lot of strangers inviting you to their table to play a game.

A lot of those games come from the SaltCON Game Library, which allows you to check out any of the more than 2,000 games. You can then take that game to the large ballroom filled with tables to play the game. Wait, you don’t have enough people to play? Grab a “players wanted” sign to put on your table. You don’t know how to play the game you just checked out? That’s fine too, just grab a “teacher wanted” sign for your table.

The Eclipse Expo rooms are gigantic and filled with tables, and those tables are filled with people playing games. There is a section of tables reserved for what are dubbed the “Hot Games.” This area has games already set up on the tables waiting for players to sit down. There is a special group of people who have volunteered their time learning the games so they can then teach you how to play. It is a super easy introduction to a lot of different games from co-op to competitive, from card drafting to engine building.

There are a lot of tournaments running as well. SaltCON tournaments sponsored by local companies are held for gift cards and other prizes. I can definitely say I’ve never seen so many games of Terraforming Mars running at the same time! There are also Envoy tournaments, with the winners getting GenCon badges and housing so they could continue the tournament there in the next round. And, of course, everyone likes free games, so the Play to Win events are very popular. Games are provided by publishers for attendees to learn and play, and when the game is turned back in you can enter for a chance to win the game.

In the Stratus conference rooms next to the main gaming area are the role-playing game events. The Dungeons & Dragons Adventurers League is also there running organized D&D events. SaltCON also allows you to join games from a variety of systems with game masters running campaigns ranging from Call of Cthulhu and The Witcher RPG to Star Wars d20 and Buffy the Vampire Slayer. There are campaigns that span the entirety of the convention and smaller one-shot events that happen in the space of a few hours. Going through the schedule of events gives you a great idea of just how many RPG systems there are.

SaltCON always has a very busy game swap area where you can sell your games and buy games from other attendees. I found myself stopping into the swap multiple times each day, just to see what had been added. I found nostalgic items like Scotland Yard, published by Milton Bradley in the US in the ’80s. There were brand new games, small card games, Kickstarter special editions, and out-of-print games. As is common, most of the games had a Venmo code on them, so all you had to do was scan the code, pay the seller, and the game was yours. As I spoke to people in the swap area, the common theme seemed to be that people were somehow buying more games than they sold… funny how that happens.

The exhibition hall is always a joy to walk around, talking to vendors about their products, and finding out about new products coming to market. The main booths were occupied by Board and Dice, Eagle Gryphon Games, and Binary Cocoa. They all had several of their more popular games available for attendees to try, with Board and Dice showing off Founders of Teotihuacan and offering preorders for local pickup, which was a nice bonus.

Down the center aisle in the exhibition hall, I found myself accosted by a genial wizard named Alphinius Goo hawking his RPG products from Gooey Cube and based in the world of Zyathé. Once you pull yourself away from interacting with Alphinius, who seems to have a charisma score somewhere in the high 20s, you will find yourself transported to a series of campaigns with all of the addons and information needed by a game master to run a fabulous campaign for their players.

There were many other vendors as well, including Tinker’s Tower, from Clinton, Utah, who offer custom 3D printing and laser engraving services for you to enhance your board games and other hobbies. Other vendors had candles that smelled deliciously of bacon, custom miniatures, and lots of other hobby-related items.

On Saturday evening in the main gaming hall, several winners of various prizes were announced, including recognizing the winners of the Ion Award. The Ion Award is a large board game design competition held annually since 2009, with the winners being presented at SaltCON. The judges are invited from a pool of industry experts, professional play-testers, publishers, and game store owners. Their job is to go through the submissions of unpublished games and come up with four finalists in the Light Game category and Strategy Game category. The final winner is announced just before SaltCON, and many of the finalists get picked up by larger publishers. This year, the light game category winner was Capetalism by Chris Chan, and the strategy category winner was Clima – solving the climate crisis by Carlos Flores.

Winding Down the Weekend

Of course, as with any convention, the people are what make it all worth it. And SaltCON delivered satisfied people in droves. Everyone I spoke with, from first-time attendees to a father and daughter who volunteered together to teach the Hot Games, were there for the love of gaming. They came from lots of different geographical areas, with many staying at the local hotels, even if they were local, just so they could get the most gaming goodness out of SaltCON.

I ran into a few different gaming groups. There were the Herriman Utah Gamer Girls, who get together regularly to play games. They were at SaltCON, making a weekend of it, staying in the hotel, and arriving in matching roller derby jerseys and pink lady jackets, intent on having a great time with a hobby they love. The Northern Utah Gamers Guild had many members attending and were always happy to talk to me about different games and help me learn how to play games I had never played before.

There were individuals who showed up and brought their favorite game with them. I sat down to play Tang Garden with Bryce, who had a Players Wanted flag up on his table. I was immediately struck by the beauty of the game, as were two other players who sat down soon after me. They were friends who came to the convention together from a few hours away to find new games they wanted to add to their collection.

And I had to smile seeing families playing games together that they purchased there at SaltCON, discovering new gems like Life of a Chameleon from Last Night Games. Seeing families, friends, neighbors, and strangers enjoying the hobby together was a nice getaway from some of the stresses of our day-to-day world today.

Overall, I had a wonderful time at SaltCON and can’t wait to go back. SaltCON hosts several events per year. This year, the summer event has been canceled, but SaltCON End of Summer 2022 is being held from September 2nd through September 4th at the Davis Conference Center. It is a smaller event than the spring event, but from what I have seen of the SaltCON group, it should be an outstanding experience for anyone who attends. I’d like to explore volunteering in order to experience yet another side of the hobby and the convention. You can find more information and purchase badges on their website. 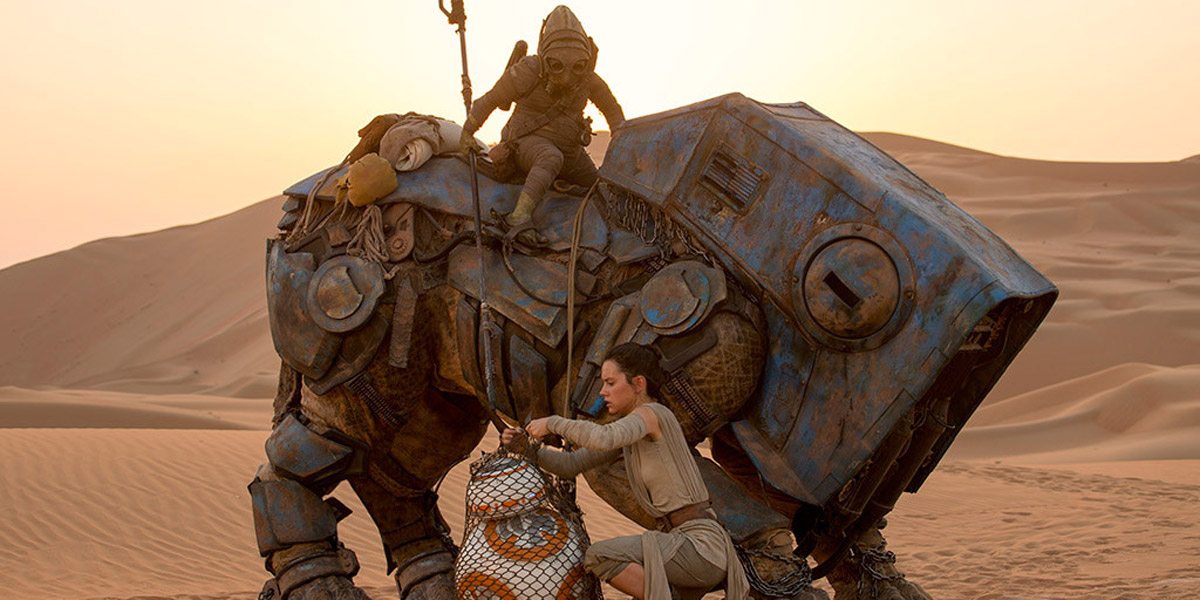