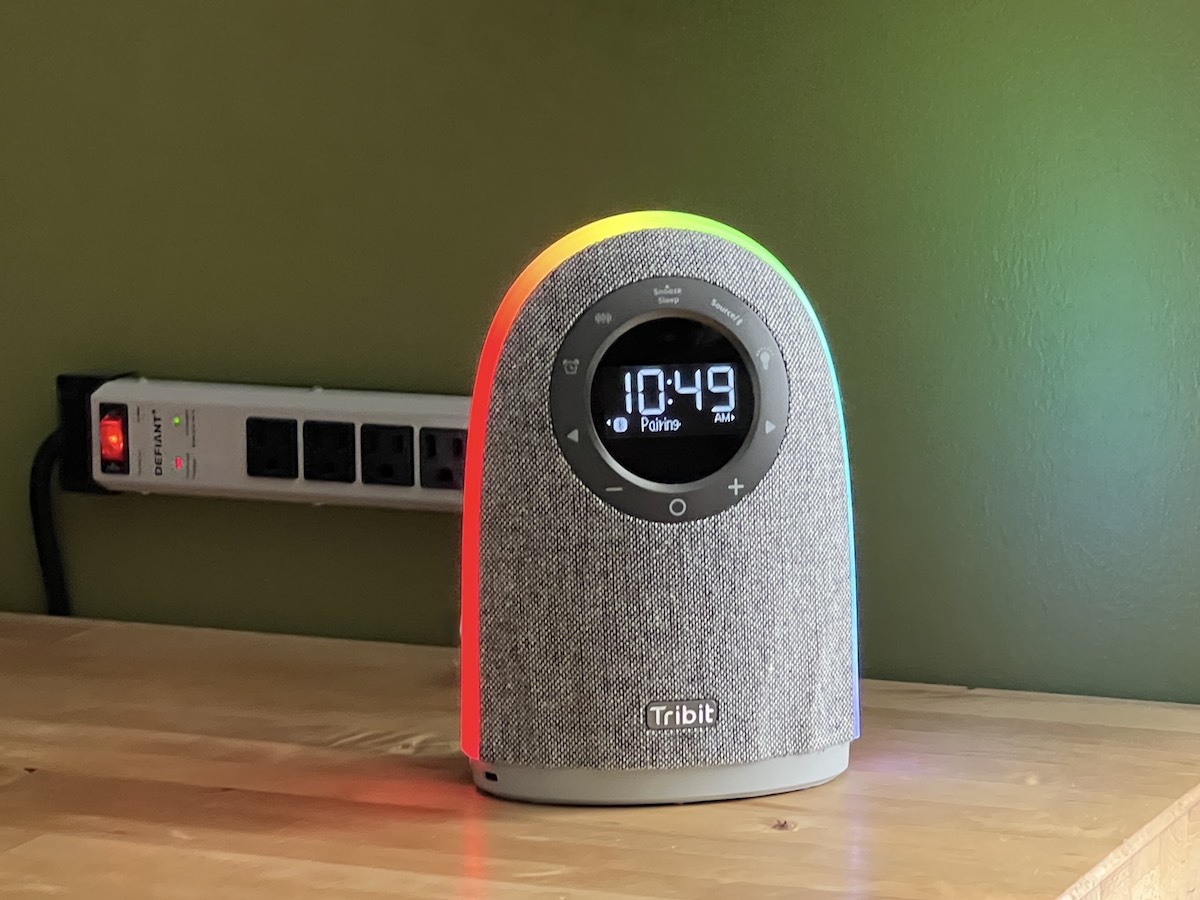 Last year, I reviewed a pair of portable Bluetooth speakers from Tribit. Both the StormBox Pro and the StormBox Micro caught me off guard with how good they were given their size and price. The company followed those speakers up with something aimed at the bedside table: the Tribit Home speaker. Does it live up to expectations?

The Tribit Home features a very unique design. It has an oval-shaped base measuring about 5.5 x 3 inches but stands nearly 8 inches tall. The front and back are covered in an attractive rough-weave gray cloth, but that front face has an unusual ruffle at the bottom. A circular LCD display with a series of touch controls is mounted in the top half of the front, while the position on the back is taken up by an exposed, circular, passive bass radiator. The bottom back has the power input, a 3.5mm AUX input, and a micro SD card slot. The bottom side has a USB-C port and a covered USB Type-A port.

Dividing the front and back halves is an inch-wide strip of shiny white plastic arches, covering a total length of 18 inches. Underneath is a door concealing a CR2032 backup battery (included) and a button for setting the clock’s time.

The overall effect has been described as a tombstone, a jukebox, or a ghost. All of these descriptions are applicable—it’s really unlike any other wireless speaker I’ve seen.

The bottom is well padded with silicone so it won’t slip, and the speaker weighs about 2.7 pounds.

This entire device is built around a wireless speaker, so let’s unpack that part of the equation first. Beneath the cloth is a 3-inch mid-bass driver and a 1.2-inch tweeter. They are supplemented by the 3.5-inch passive radiator mounted on the back. Power to the drivers is 15W and 10W respectively. That’s 25W total, which means the Tribit Home speaker is capable of playing music much more loudly than your average bedside speaker. It’s not portable, though. The battery is strictly clock backup. Bluetooth support is limited to SBC—there’s no AAC or AptX.

Like the other Tribit speakers I’ve tested, this one packed a surprising amount of low-end punch for something in this price range. Highs are fairly crisp, with an overall warm tone. It sounds pretty decent, at least until you start to increase the volume. As you approach the halfway point, things can start to get a bit messy. For example, playing “In the Air Tonight” at about 50% volume, everything is fine until the infamous drum intro. At that point, the speaker devolved into a buzzy mess.

Even at 50% volume, the Tribit Home speaker puts out a lot more sound than most bedside speakers, so you may never notice. But if you were looking at this to do double-duty as an audio system, be aware of the limitations.

Outside of playing music streamed by Bluetooth, the Tribit Home speaker does a whole lot more.

The Micro SD card slot and 3.5mm AUX input offer two more ways to get the music to play. It also has a built-in FM radio tuner, and an external wire antenna (which plugs into the AUX port) is included. The USB Type-A and USB-C ports can be used to charge your phone. Why is one of the ports covered by a silicone plug and the other exposed? I have no idea…

There is a programmable alarm clock with a battery backup in case you lose power. There is integrated “sleep machine” functionality with multiple options including White Noise, Sea Shore, and Bird. The white plastic strip is an LED light. It can do white (which can make for an effective night light), a slow rainbow effect, and pulsing to music in a multi-color mode.

This is a lot of functionality. Unfortunately, the execution falls a bit flat in many cases.

For example, the multi-color synchronized lighting effect is eye-catching but can be jarring in its execution. It’s a little too jerky in general, but going back to “In the Air Tonight,” the drum intro sent the lights into a frenzy of flashes that has to be a seizure risk. The touch controls work pretty well in most cases, but for some reason, the combo to adjust the brightness of the white light was hit or miss. Sometimes the buttons responded, other times they didn’t.

The sleep machine effects repeat in a very short loop. Instead of inducing sleep, I found the repetition was annoying.

In short, this device can do a lot of stuff and at a shallow level, it can be cool—that LED lighting is an eye-catcher—but when it comes down to actually using it, some of the features fall flat.

It would be hard to recommend the Tribit Home speaker except for the fact that it is so inexpensive. Its regular MSRP was $89.99, which was very aggressive. At the time of publication, it’s been reduced to $60.99 on Tribit’s website. That’s low enough to overlook a lot of the shortcomings.

If you consider the alarm clock, FM radio, Bluetooth speaker, USB charging, white light, and rainbow effect functionality, $60.99 is a pretty solid price. Being able to play music loudly, the sleep functions, and the music-synchronized lighting are just bonus features—they may not work the way you’d like them to, you don’t need to use them, but they’re there to play with if the mood strikes.

Disclosure: Tribit provided a Home speaker for evaluation but had no input into this review. As an Amazon Associate, I earn affiliate fees from qualifying purchases. 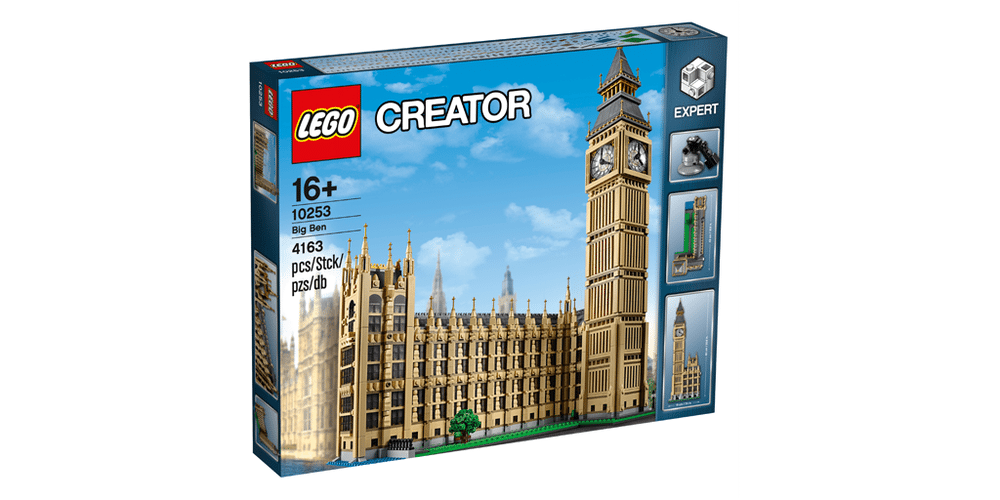 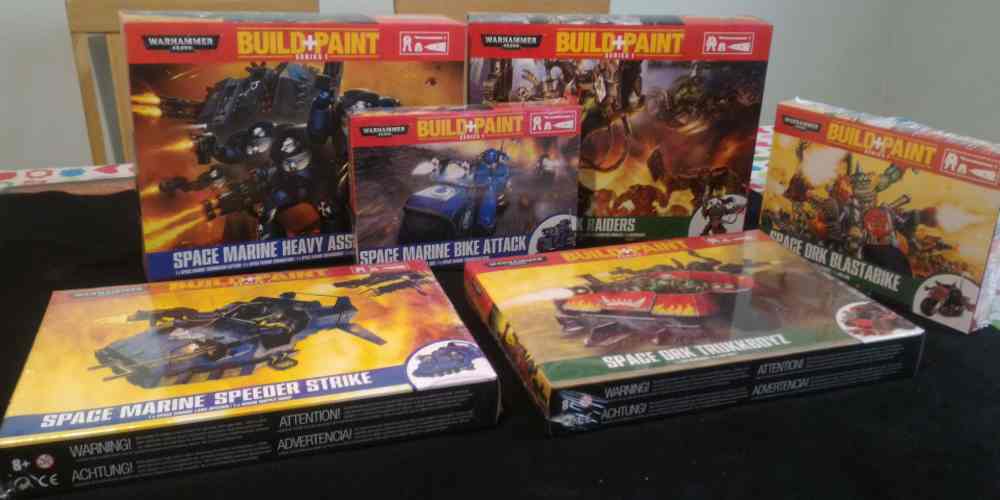