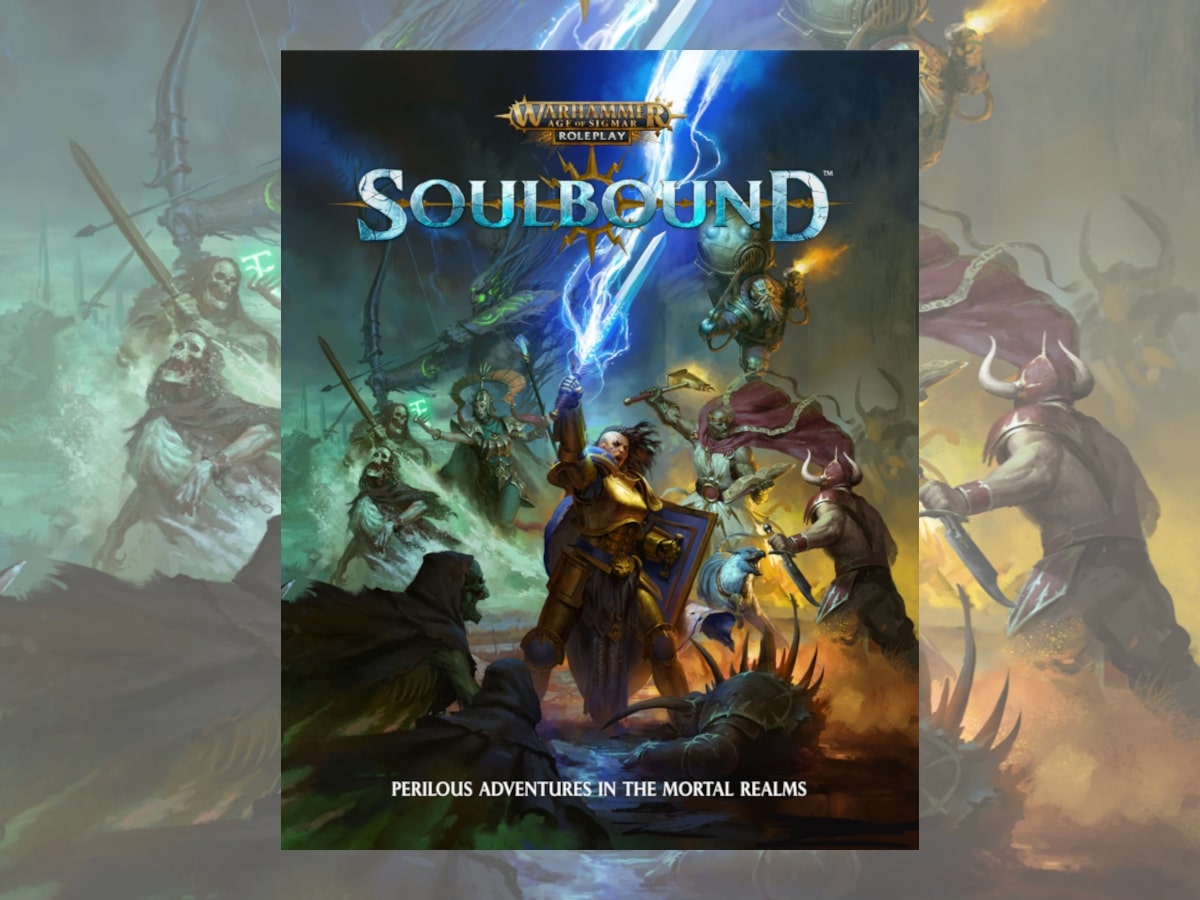 It’s an exciting time for those who play Warhammer: Age of Sigmar. As I mentioned recently, the arrival of the new Dominion box is big news in the Warhammer world. Exciting though Dominion might be, it’s not the thing that has turned my attention to the Mortal Realms, Age of Sigmar’s setting. Whilst each iteration of the game develops Mortal Realms, it’s the full arrival of Cubicle7’s Age of Sigmar: Soulbound RPG that has set this fledgling world on fire.

We’re Not in Altdorf Any More.

Yes, I know this discussion has been put to bed and I’m not going to wake it up, but it is relevant to my excitement about Soulbound. I loved the Old World (the original setting for Warhammer). I have many fond teenage memories of battling there and even more so, roleplaying in the Empire. The Enemy Within campaign was my roleplaying pinnacle.

I had huge nostalgia pangs and was mildly irked by GW when they destroyed it all to build the new Age of Sigmar system. Nevertheless, the tabletop game hasn’t looked back since they did so. In the intervening 6 years, GW has worked hard on their canvas, and with Soulbound, Cubicle 7 is adding details to the broad brushstrokes of the GW lore writing team. And the result is glorious.

It very much reminds me of those heady days of early WFRP (Warhammer Fantasy Roleplay), where we had this entire world to explore; to invent. The Mortal Realms are more “high fantasy” and surreal than the Old World, but they now have cities and people, trade routes, and mouths to feed. Yes, there are some crazy goings-on but the setting is now offering us compelling reasons to tell stories in the Mortal Realms, rather than just bringing two armies together and having a pitched battle for no apparent reason.

Despite the popularity of competitive wargaming, it’s clear from story arcs like the recent Broken Realms campaign, as well as all the storytelling content soon to be delivered via Warhammer+, that GW is committed to bringing interesting narratives to their games and that stories sit at the heart of what they do. Several of the new Cubicle 7 offerings bring in events from the most recent Age of Sigmar developments, showing that the companies are working closely together, to ensure that the Soulbound playing experience is as true to the tabletop lore as possible.

I haven’t had much time to roleplay during the pandemic. I certainly haven’t been brave enough to try to remotely play a game I’ve never played before. Yet, the more I read about the game, the more I want to play it. I love the old-school feel of WFRP, but the freshness of Soulbound is also extremely appealing.

Soulbound has a more streamlined, easier-to-pick-up, rules system AND it is taking place in a growing, ever-changing world, which will have support in the form of the continually evolving product lines of Games Workshop. Some may see this as a bad thing, but as somebody who loves both miniatures and roleplaying games, for me, it just adds to the sense of scale and makes the setting all the more immersive. 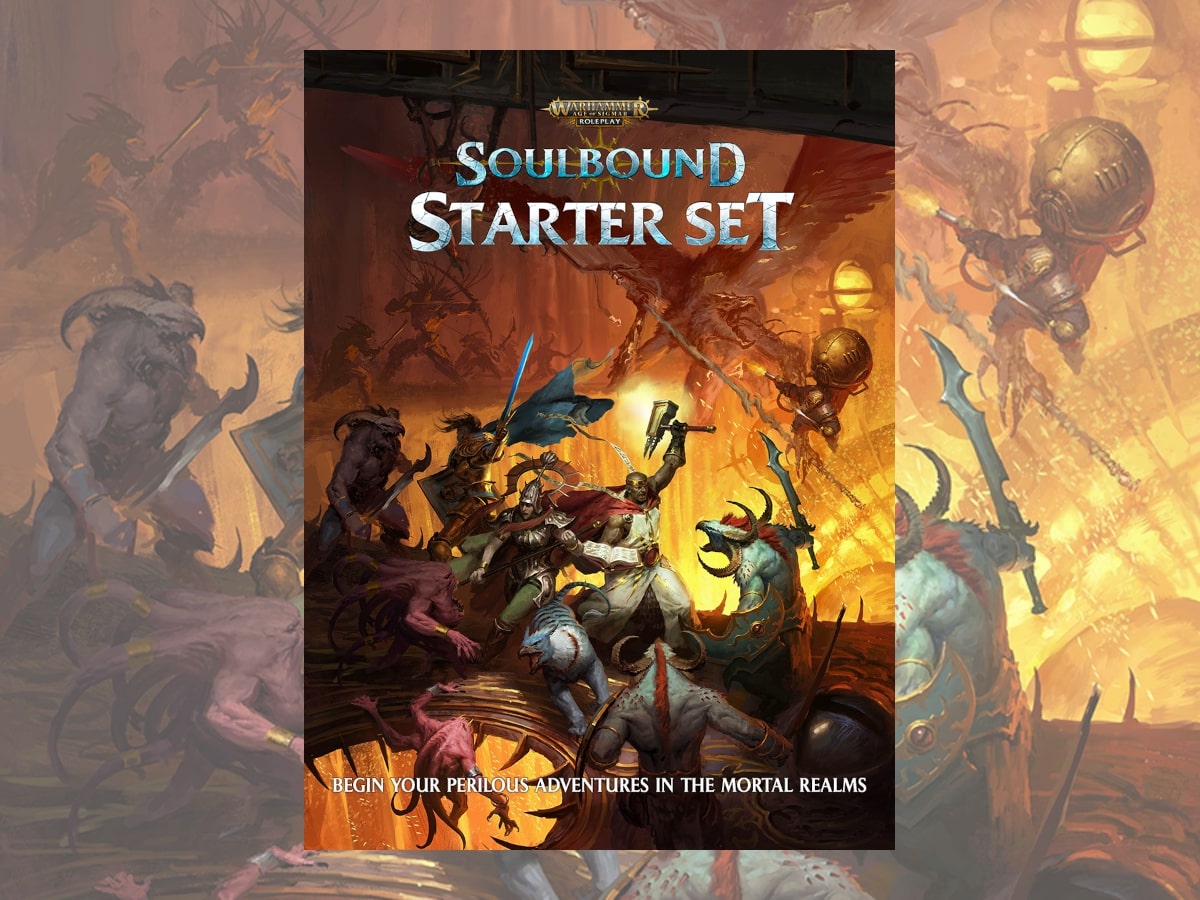 There 3 physical products already for Soulbound and I hope to review them fully during the summer. The production values for all three are excellent. The core rulebook is a thing of beauty with great artwork and some interesting gaming concepts contained within.

The Soulbound Starter Set is beautifully packaged and delivers a perfect jumping-off point for adventuring in the Mortal Realms. I was very impressed by the scope of the adventure that comes with the set. It’s easy to get into and has an intriguing narrative.

The GM’s screen delivers a handy aide memoir and yet more shorts and bits of information for triggering yet more Mortal Realms adventures.

What’s on the way?

There’s a huge amount of stuff coming for Soulbound. The first 4 things on my list are already available in PDF form with physical copies due to arrive in 2021. 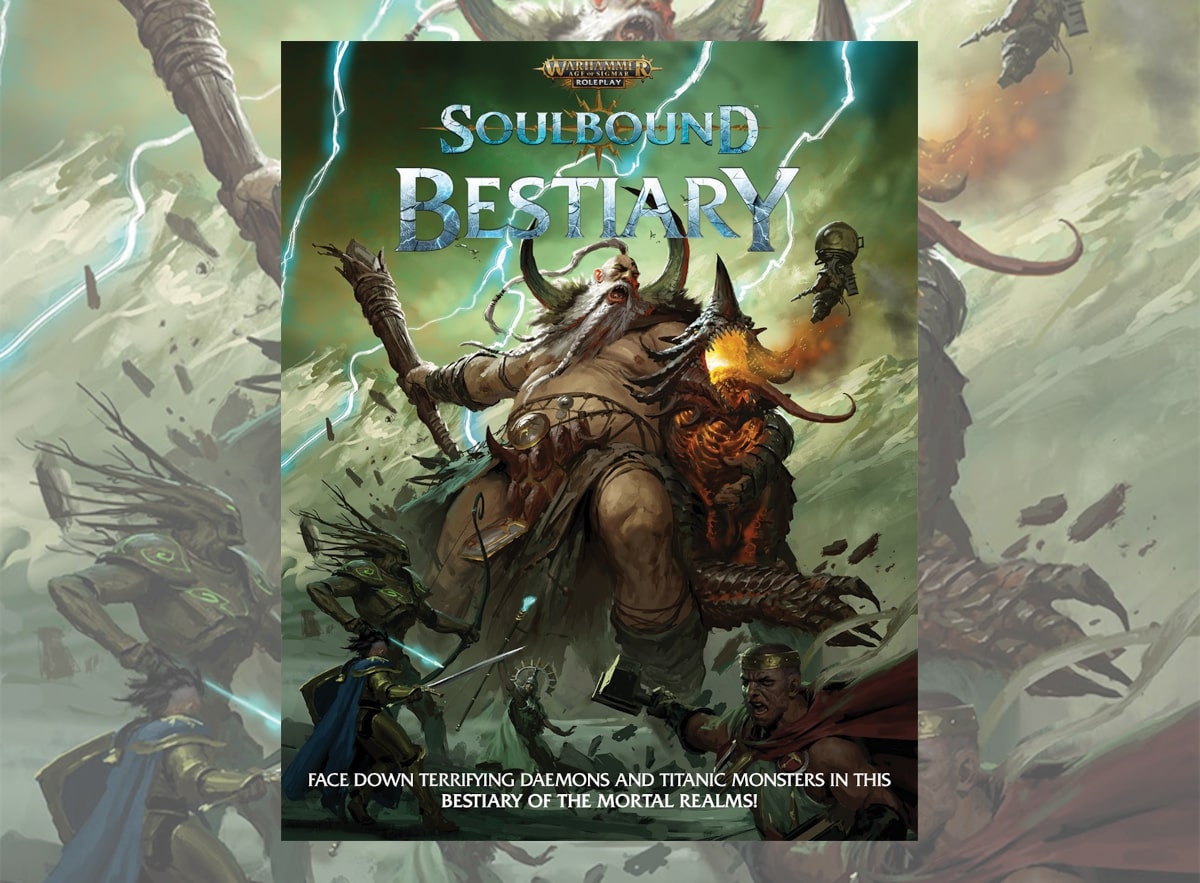 The Bestiary is a fairly standard role-playing release. It’s almost an unwritten rule of the genre, that after the rulebook, comes the bestiary. This book gives stat blocks for over 180 monsters and creatures from the Mortal Realms, as well as suggestions about how to use them to create intense and exciting battles. It also discusses how you might best incorporate the monsters into your campaigns with background and possible rumors characters might have heard about them. The Bestiary is broken down into broad subject headings that correspond to the relevant AoS faction/battletome. For example. Slaves to Darkness, Flesh Eater Courts, or Seraphon.

The Champions of Order book adds yet more archetypes, skills, and traits for many of the original character types outlined in the Soulbound rulebook. It also introduces a whole new race, the Lumineth (AoS High Elves) with 4 new archetypes for them. 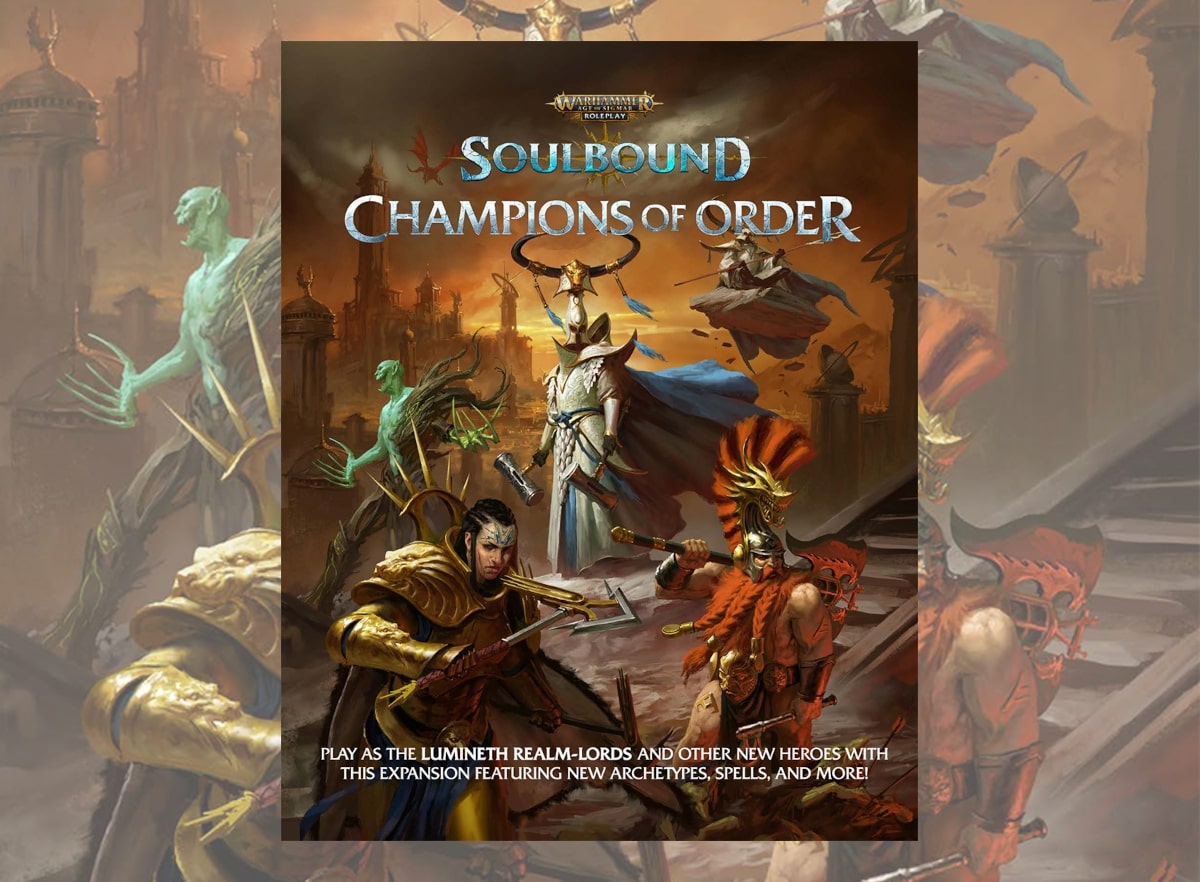 Champions of Order opens with a very interesting section on the history of “Bindings.” Bindings are what make up a Soulbound party. They’re essentially god chosen to further the works of good in the Mortal Realms. Only, it transpires that there’s rather more to it than that. It turns out that all the members of the non-Chaos Warhammer pantheon had a hand in creating the Bindings. Meaning that moving forward, using the new rules, the bindings that hold player parties together might have a particular “flavor” depending on which diety had the bigger hand in it. There is even the prospect of Undead bindings and Orcish destruction ones, which sound most interesting indeed! (More on that later.)

It’s worth noting that this book also includes new rules for the Daughters of Khaine which directly result from the events of the recent Age of Sigmar campaign, Broken Realms.

Shadows in The Mist.

The first full campaign for Soulbound is formed of 6 chapters. All available individually as PDFs and brought together in this impressive single volume. This book felt as exciting to me as looking at Power Behind the Throne some 30 years ago. The campaign is set in the city of Anvilguard and reading through Shadows of the Mist, I’ve gone from having little interest in the setting to wanting to put a group together in order to play the game and investigate the secrets of the Mortal Realms. 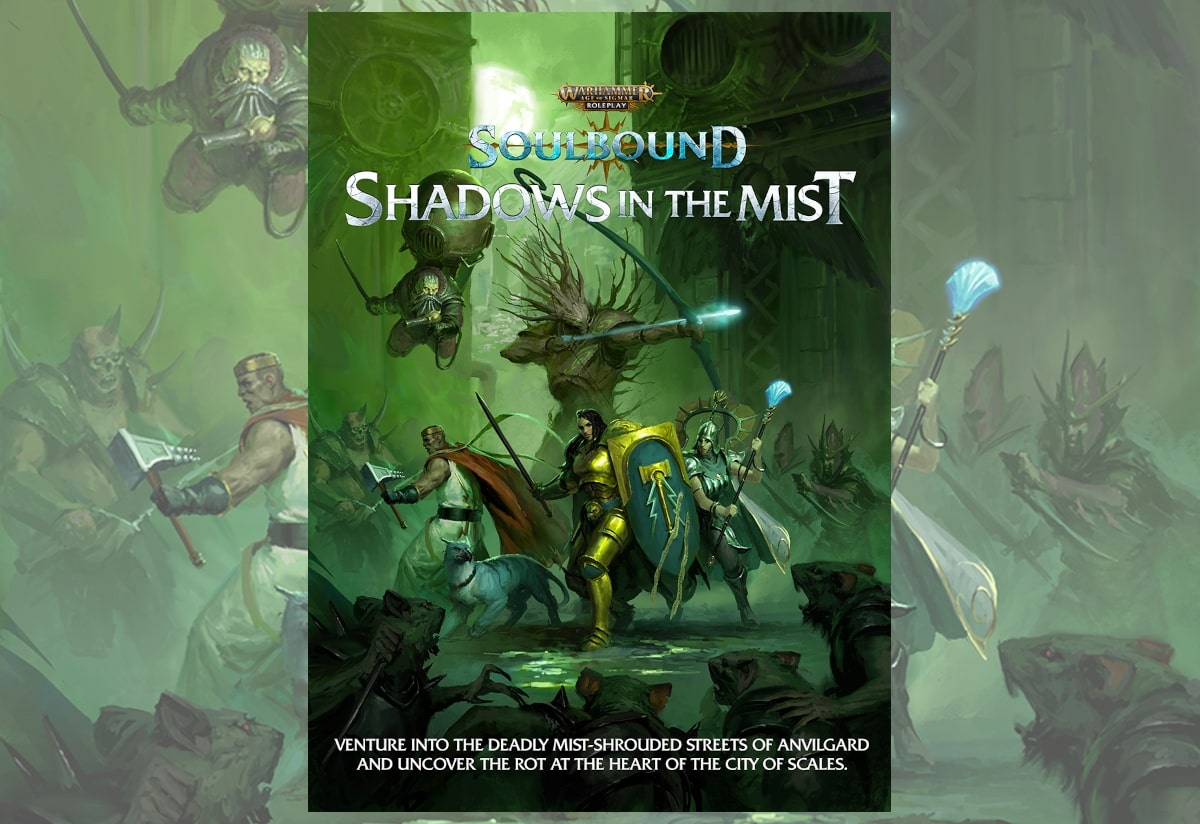 The campaign takes place in and around Anvilguard, a city surrounded by a jungle. Jungle that is forever trying to encroach into the city itself. The adventure opens with the PCs trying to discover the whereabouts of a missing airship that was carrying the defoliant needed to keep the jungle at bay.

The adventurers will be pitted against the shadowy Blackstone Coil, a secret criminal organization the tendrils of which permeate the city. If that wasn’t enough a cult of Nurgle is in Anvilguard also pushing its own agenda. The description given of Shadows in the Mist bills it as a noir-thriller whose inspiration comes from pulp adventure stories and noir investigation novels.

If all that wasn’t enough, there’s lots of information at the end of Shadows in the Mist about the tumultuous events of Broken Realms and the effects it has on the city of Anvilguard. There are lots of triggers for adventures set in the aftermath of the story. Exciting times are ahead! 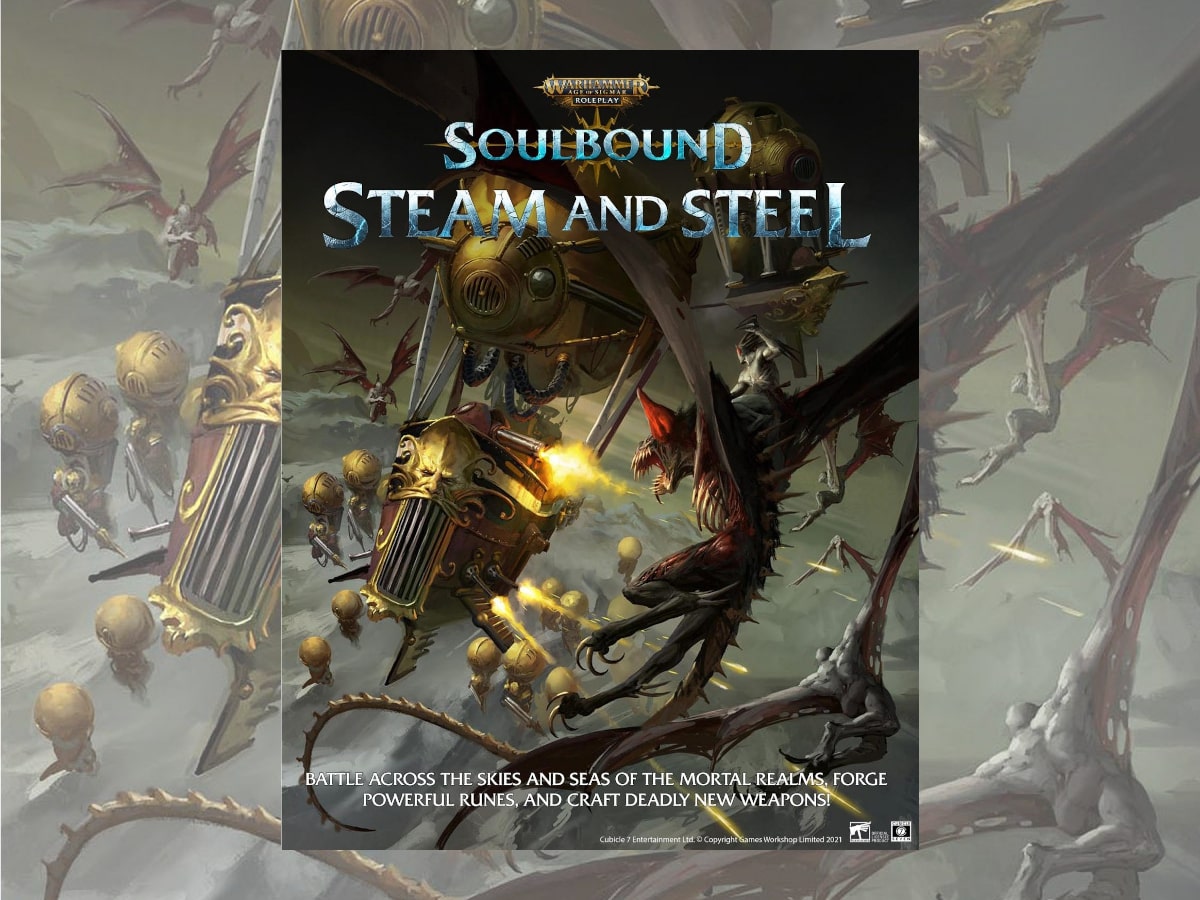 Steam and Steel hit my inbox as I was writing this article, so I haven’t had a huge amount of time to explore its contents. It’s an equipment book filled with artifacts and with lots of rules about crafting and creating in the Mortal Realms. Again this adds life to the bones of the setting. The artifacts and objects that the people of the Mortal Realms give it yet more flavor and richness. We’re gaining yet another glimpse into the lives of the setting’s population.

Steam and Steel is an invaluable manual for Duardin (Dwarf) players. They have the most access to crafting type archetypes and the two Duardin Gods Grimnir and Grungi have chapters to themselves. There are also rules for vehicles, not just specific ones such as gyrocopters and steamtanks, but general rules for vehicle combat and chase scenes too. Now, who doesn’t want to run a gyrocopter chase?

This release is PDF only and is due imminently (in fact, it came out whilst I was pursuing the Steam and Steel and before I finished this article! Cubicle 7, you are spoiling us right now!) It provides you with rules and archetypes to bring Seraphon (lizardmen) characters to the setting. The Seraphon are the only major race from the Order faction not to have player character rules and this book corrects that omission. Just about. There are only two Archetypes, listed, a Skink Starpriest and a Sarus Oldblood, but there are a number of pages devoted to the culture and artifacts of the Seraphon, as well as an explanation of how they differ from the other races of order. 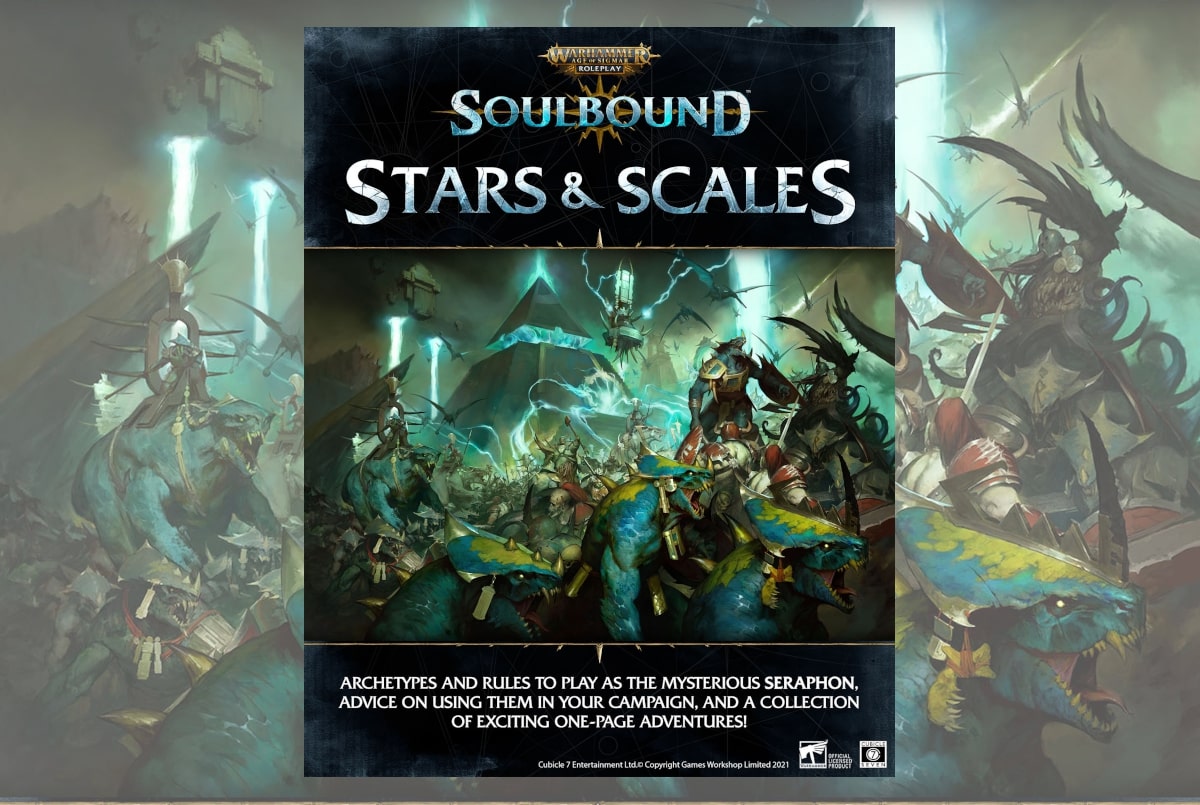 Adding Seraphon to your campaigns whether as NPCs or PCs will bring something “other’ to the mix. A seraphon’s adherence to the “Great Plan” will sometimes align itself to other characters’ needs, but it might just as easily run counter to their wishes. These cold-blooded characters remain ever-inscrutable to their warm-blooded counterparts.

As well as giving the rules and background for Seraphon, this book also includes 7 one-page interconnected adventures that will see (non-seraphon) characters assembling pieces of a mysterious serpahon artifact. Along the way, they will encounter undead Bonereapers, forces of chaos, and the ever-present skittering of Skaven.

This might be the most exciting of all the forthcoming releases for Soulbound. Champions of Death will allow you to play characters from the Death faction, whether they be mighty Soulblight Vampires or the delusional Flesh Eater Courts. Fancy playing as an incorporeal Nighthaunt, you should be able to do that too! There aren’t a huge amount of details available for this book, but it promises rules for playing for a full-on binding of the undead. (This ties into the work outlined in Champions of Order about how different bindings work. Nagash, Lord of the Undead has his own spin on things, make no bones about it!) Champions of Death will also outline how to run adventures of mixed Death and Order factions.

I can’t wait to see what else this book brings to the table. 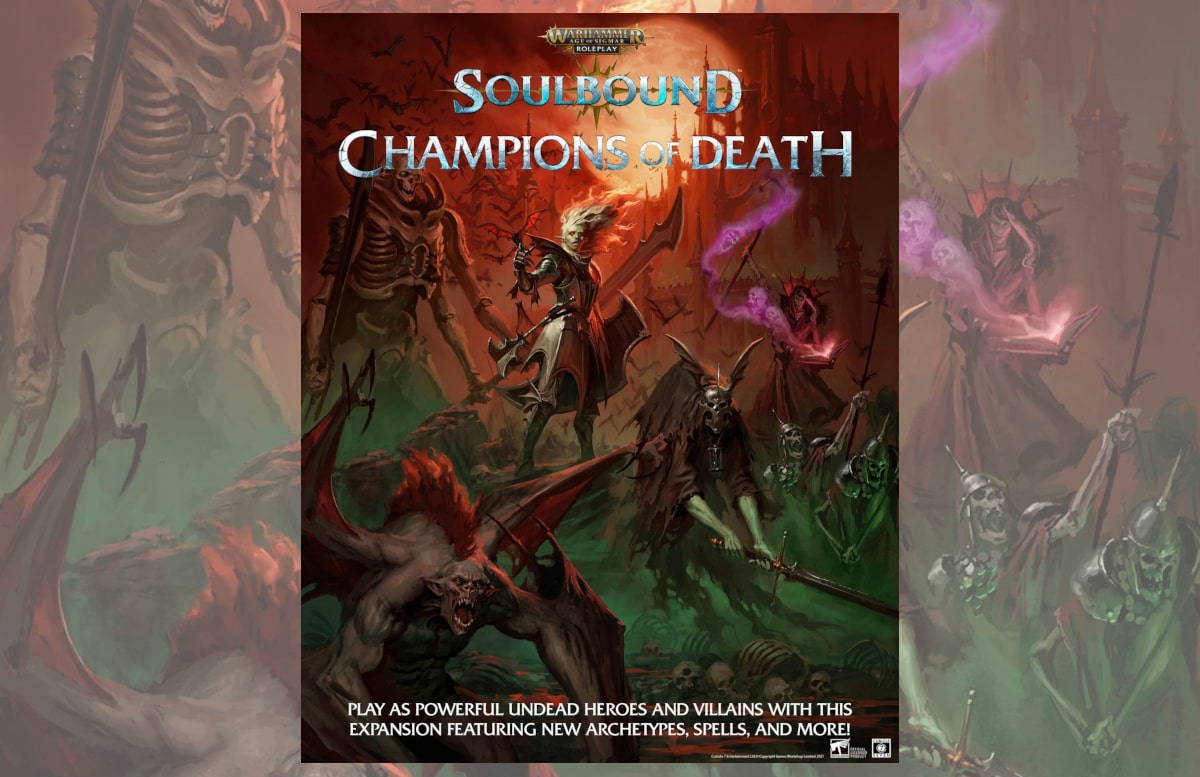 And that’s not all. Even further in the future, according to a recent production announcement we have a Champions of Destruction book coming which will enable players to get the Waaaaagh! on and play as orruk (orc) characters. There’s a book of artifacts of power coming too. All that, and more besides, no doubt.

So Soulbound seems to be in a very strong place right now. It’s backed arguably the most popular fantasy tabletop game in the world and the amazing talents and design skills of the Cubicle 7. There has never been a better time to venture into the Mortal Realms. Which probably means I should pull my finger out, find my sleeping bag, and set off for Anvilguard!

Last Chance! Please Vote for Us in the Bloggies (GeekDad Weekly Rewind)

Bayonetta the God of Fun