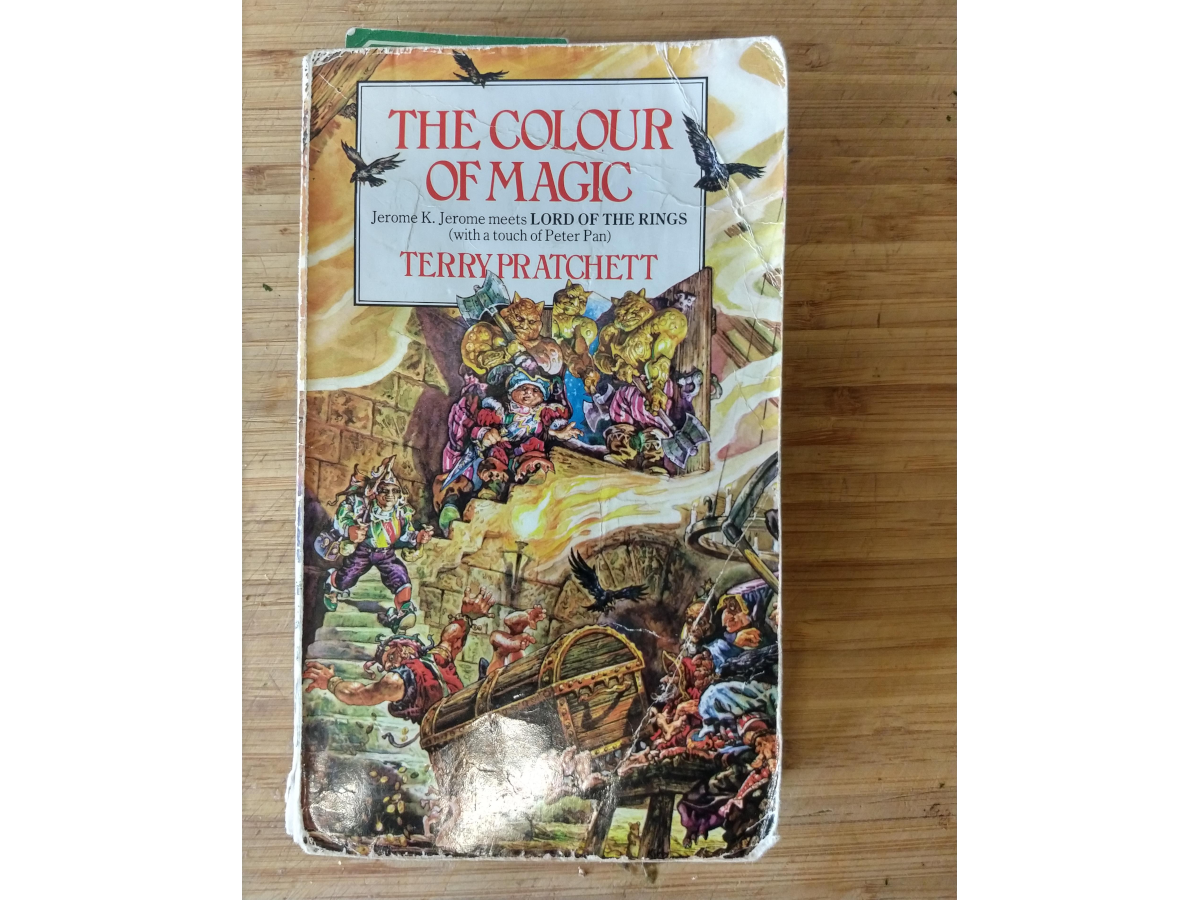 More than one month into the year already but my rereading Discworld project is finally up and running. I’ve read and reviewed one Discworld novel! Of course, as I write, I’ve only read a Discworld novel. The review will come with time. At least I hope it does, otherwise, you won’t ever read this sentence, and I’m sitting up late at night typing into the void.

Lockdown and homeschooling have not been kind to my reviewing schedule but, at last, I have read The Color of Magic.

Let’s just say that if complete and utter chaos was lightning, then he’d be the sort to stand on a hilltop in a thunderstorm wearing wet copper armour and shouting “All gods are bastards.”

Rincewind from The Color of Magic. Still one of my favorite quotes ever. Not just from Discworld, but from any book, ever.

My copy of The Color of Magic is old and battered. It looks much loved. Curiously, it’s in a much worse condition than my copy of The Light Fantastic, though I have no recollection as to why this might be. The cover price is a staggeringly small, £1.95, which is roughly a fifth of the current cover price. I did buy it in 1987, so, all things considered, books still feel like a bargain today.

The first thing I’m struck by is the excellence of the Josh Kirby cover. I loved these as a teenager; they were unlike anything I had seen before. I used to love poring over them, particularly after having read the books as I tried to recognize the characters from the story. It’s worth noting that Kirby’s Twoflower literally has four eyes, whereas I think the four-eyed reference to Twoflower in the books is meant only to suggest that he wore glasses (a rather out-dated observation for modern readers).

On reading the prologue, you immediately know you have something unusual in your hands. I remember reading about Great A’Tuin for the first time. Who doesn’t? Everybody remembers their first elephant-backed turtle. The idea of a world that was completely flat was also completely insane and I loved that the sea just fell off the disc.

The book is broken down into 4 novellas. The stories are interconnected but are mostly complete within themselves, though the book ends on an almost literal cliffhanger. Through the mists of time, it is largely the first story that sticks with me. It introduces Rincewind, Ankh Morpork, and the Luggage – three things that are as quintessentially Discworld as the giant tortoise himself. The Luggage probably deserves a whole blog post devoted to it. Its sapient pearwood existence is a testament to Pratchett’s genius. Few characters in fiction are so revered as the Luggage.

The Color of Magic sees the formation of a proto-Discworld. You can see, with the benefit of hindsight, what the world will become, but I doubt, at the time, you could have guessed it would evolve into a global phenomenon. Reading this initial volume, it’s impossible not to admire the quirkiness of the writing, but you’d have been a brave person to bet money on the books turning into a world-dominating 30+ volume series.

The stories that follow are gently absurd. They take popular fantasy tropes of the time, mix in a little D&D style adventure and gently poke fun at them. 8 has always been my favorite number. As a kid, I loved all the references to octarine, the eighth color, and, of course, the color of magic. The is something perfectly simple yet utterly mind-bending about an 8th color of the rainbow. This color of magic idea works as a metaphor for Pratchett’s writing. The building bricks are simple but the constructions defy logic.

It’s hard to assess The Color of Magic on its own merits, since so much has come after it. Researching this series, I’ve come to realize the depth and breadth of the fan community. This was the beginning of all that. Countless hours of pleasure and joy are rooted in this first book. It’s easy perhaps to suggest that the book is a little dated now; the tropes it satirizes are long in the tooth. Today, these incisors are yet more elongated than they were 35 years ago, but as you can still find them in modern games and fiction and games, Pratchett’s satire of them is still relevant. Rereading Color of Magic didn’t feel as “fresh as the day it was written,” as these sorts of reviews often like to claim, but it does still contain the same sense of verve, wit, and off the wall imagination that I remember from my first read-through.

My recollection is that I enjoyed The Light Fantastic even more than The Color of Magic and it’s hard to assess the opening of the Discworld legend without having read both. Look out for volume 2 in my Discworld reread in the not too distant future.

HOW COULD I HAVE FORGOTTEN ONE OF PRATCHETT’S GREATEST INVENTIONS ALSO INCLUDED IN THE COLOR OF MAGIC? Death – perfectly personified. Death doesn’t have a huge amount to do in The Color of Magic, so I’ll return to him in later reviews.

Observations on The Color of Magic by Mariana Ruiz

So, first of all I thank Robin for letting me chip in in this conversation. I approached this world thanks to the recommendation of Neil Gaiman; Good Omens had been a cool book so I decided to give this first Discworld book a try and purchased it at Waterstones in 2012.

I found it a very difficult read, a bit slow, and had no idea about the world it was supposed to be in. I thought Twoflower was naïve, and in short, I struggled to continue to the second volume. However, my husband gifted me with the entire collection alongside my first Kindle, and that changed everything, because you really have to start with Equal Rites and go backwards and forwards from there.

That is why people have a map, or a suggested reading order. Because what Terry did was start the next book the second he had finished the previous one; he truly believed it would jinx his work if he did not have one story to go by for the next writing day. So, the way to achieve this for him was to develop all his characters one novel at a time. There is such richness in them, such love, that you will find yourself coming and going into the novels just to see this growth, this evolution. Twoflower will reappear in the 17th novel, Interesting Times, because his visit to Ankh Morpork has inspired him to start a revolt in the Counterweight continent, and we can talk about that in 17 issues from now (hopefully).

I agree that this novel is the setting for the entire fictional universe, but as Neil Gaiman says as to where to start:

If you ask a dozen Discworld fans which book to start with, you’ll get a dozen answers, none of them wrong.

Some of my favorite Discworld books are Monstrous Regiment, The Thief of Time, and Night Watch. They are each Terry at the top of his game. And you could start with them. It’s a merry-go-round, and you can jump on at any point, and then catch up from there. 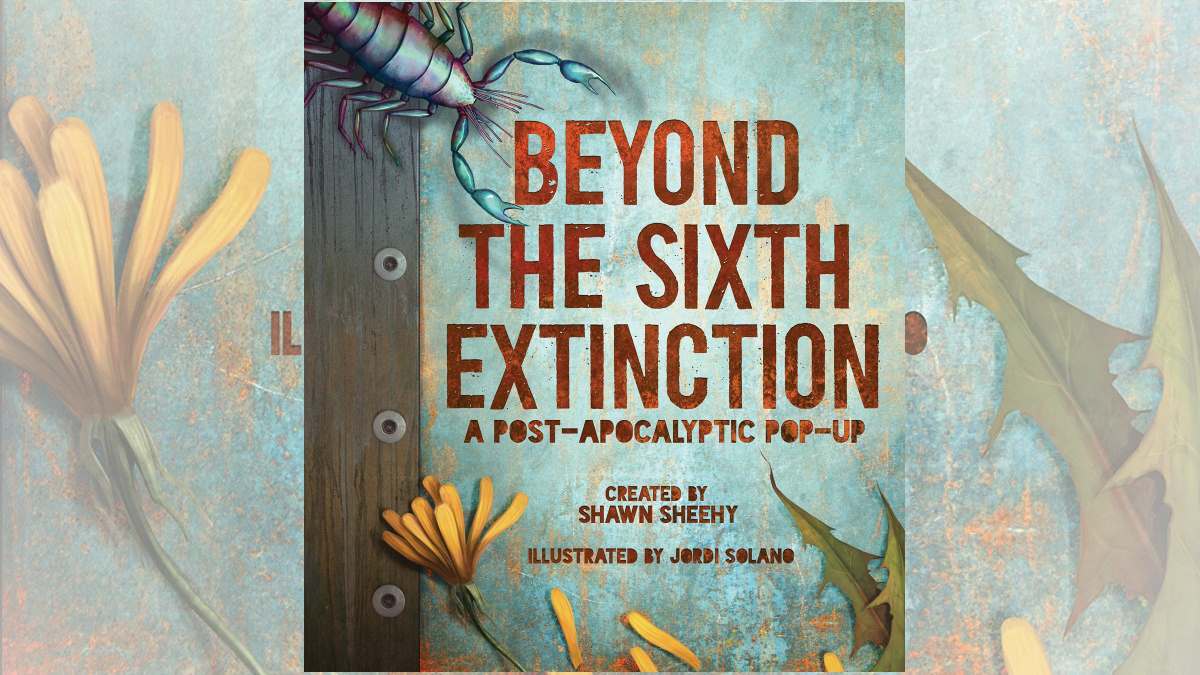 Word Wednesday: ‘Beyond the Sixth Extinction’ 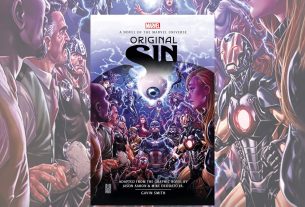 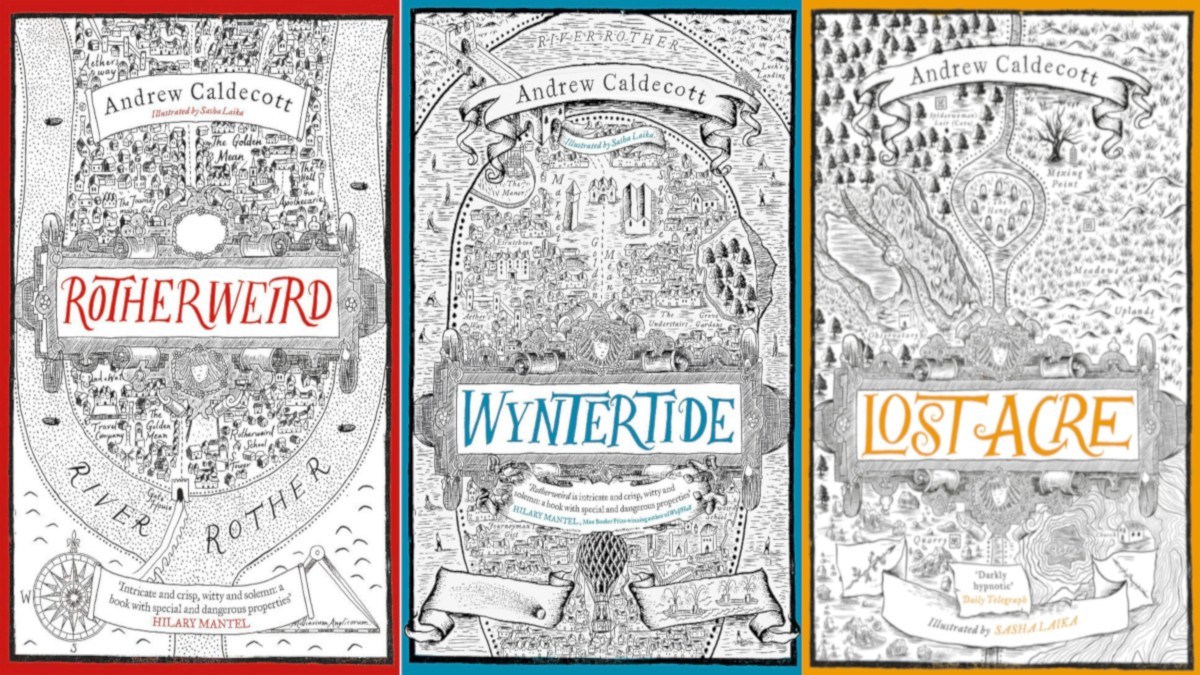