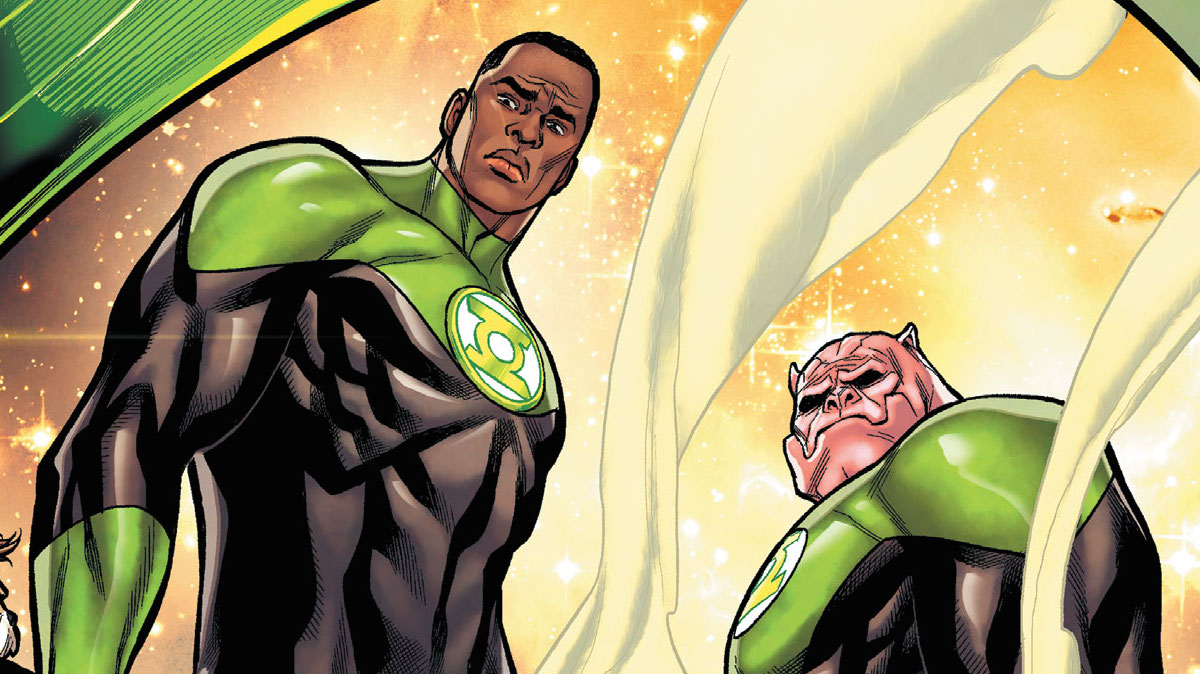 Ray: The future of the Green Lanterns is… there is no future! This issue is all about what happens when the central power battery dies and strips every Lantern of their powers, and three stories follow famous Lanterns. The first focuses on John Stewart, alongside Salaak and G’nort, as they become a non-powered strike team around the Galaxy. Like a grittier Star Trek, Geoffrey Thorne reinvents John as a wartime commander who struggles to balance his ethics with a harsher universe. Up against a Khund invasion seeking to destroy a peaceful planet for resources, this is the closest we’ve gotten to Saving Private Ryan in a sci-fi comic book, with brutal fight scenes and shocking losses along the way courtesy of Tom Raney’s surprisingly gritty art. It’s the main story this issue, and it deserves the spotlight as a preview of Thorne’s ongoing run.

Next up are Ryan Cady and Sami Basri on a Jessica Cruz story that feels like a throwback to her earlier days. Now spending her time maintaining a Lantern base as a mechanic even without her ring, Jessica is forced to confront some of her old issues when her station comes under attack from a trio of Sinestro Corps members. While two of them mostly seem to be there to be disgusting-looking and provide jump scares, it’s great to see Lyssa Drak again. Jessica spends much of the story scurrying through vents, but when she finally emerges to do battle, it provides some of her finest moments. The ending twist sets up a fascinating new status quo for Jessica that I’m hoping will be followed up on next issue.

Finally, it’s Ernie Altbacker and Clayton Henry on what’s surprisingly the best story of the volume. Guy Gardener is on a planet mediating a conflict between two groups of religious fanatics when his ring dies, so… he just stays there. He spends years learning the culture, becoming a leader, and slowly bringing peace to a seemingly hopeless situation. I could quibble that he barely seems to age in twenty-five years, but then that’s a recurring issue in Future State. I can never tell how much time has passed. But this is quietly one of the best Guy Gardner stories in years, and the punchline it ends with is a great twist. I don’t know where Altbacker came from, but I want more GL stories from him.