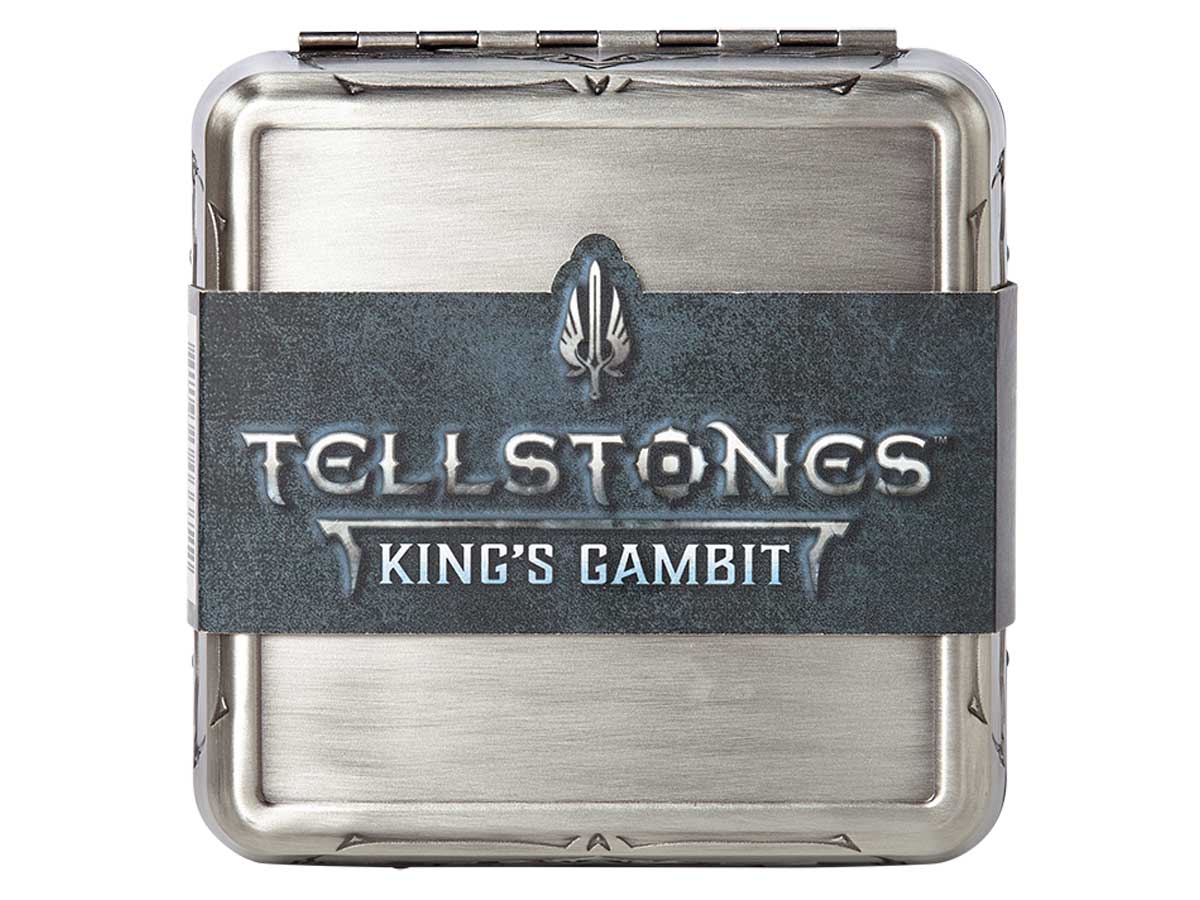 Sharpen your wits and your focus, and prepare for this “duel of minds” in Tellstones.

What Is Tellstones: King’s Gambit?

Tellstones: King’s Gambit is a memory-based game set in the world of Runeterra for 2 (or 4) players, ages 14 and up, and takes about 10 to 20 minutes to play. It’s available for pre-order directly from Riot Games for $30, and is expected to start shipping at the end of September. Although the site says ages 14 and up, the game’s rules are simple enough that you could play with much younger players, though typically adults and older kids will have an advantage over younger kids in terms of memory. The game is primarily designed for 2 players but the rulebook includes a variant for 2 teams.

Tellstones: King’s Gambit was designed by Chris Cantrell and published by Riot Games, with artwork by Danny Beck, Craig Parkinson, and Jose Martin.

The game comes in a metal tin with a paper sleeve—the tin itself has the game title embossed on one side, and a winged sword icon on the other.

Here’s what comes in the tin:

The stones are Bakelite discs, like the tiles in Hive or Azul, which gives them a nice, chunky heft. Each one has an icon within a circle on one side, engraved and painted dark blue, and is totally blank on the other. (Oddly enough, the video trailer below shows circles on the blank sides as well, but the actual stones are just white on the back.) They’re just under 2″ (5cm) wide and 1/2″ (1cm) thick. The icons, explained in the rulebook as the Demacian version of the stones, are easily distinguished and have their own cultural significance within the fictional world.

The playmat is made of felt, printed with a border and a 3-point score track on each side.The playmat doesn’t immerse you in the theme as much as the stones do—it’s easier to imagine the stones being an artifact from the world of Runeterra (pretending they’re some sort of polished stone rather than plastic) than the felt. It works fine, but because of the material, the folds don’t completely flatten out if you store it folded in the box, and some other type of fabric could have fit the aesthetic a little better. The scoring tokens are clear glass teardrop beads—nothing extraordinary, though it might have been nice for these to be custom bits, given the attention given to the stones.

The metal tin itself looks very cool, and has a foam insert that holds the stones and score markers securely, with the playmat and everything else sandwiched in the middle when you shut it. The clasp on my tin doesn’t quite spring back out fully, so the hook doesn’t really catch and keep it shut. I’d probably do away with the paper sleeve otherwise, but it’s what keeps my tin from falling open.

The rulebook includes illustrations by Grady Frederick and a bit of lore in addition to the rules, but there’s also a letter to Cithria from her father, gifting her this set of Tellstones. Cithria is a character from League of Legends, and can be seen as a child playing the game with her father in the video trailer.

Although there aren’t a lot of components in Tellstones, it feels like a high-end game (especially because of the stones and the tin). Since Riot Games is selling this direct to consumers rather than through regular game store distribution as they did with Mechs vs. Minions, it does allow them to make a luxurious product while keeping the price relatively low.

How to Play Tellstones: King’s Gambit

You win the game by scoring 3 points, successfully naming all the face-down stones during a boast, or if your opponent completely fails at a boast.

Setup is simple: put the playmat between the two players, and give each player a scoring token, set near their score track. Set the stones face-up nearby. Select a stone at random and place it face-up in the center of the playmat. (The rulebook mentions that in Demacia it is customary to start with the scales, and to allow the older player to choose who goes first.)

On your turn, you may choose from the following actions:

The “Boast” action is a little more complicated than the others. If you boast, your opponent gets to choose one of the following:

The game ends if either player scores 3 points, or if somebody gets all the stones correct or incorrect during a boast.

The team variant allows 4 players, seated so teams alternate around the table. When telling an opponent to manipulate the Line, you direct the opponent to your left. Teammates may discuss tactics at any time, but communication is public, so anything you say can be heard by the other team as well. During a Peek action, you may allow your teammate to look at a stone instead of you.

When resolving a Boast, the players on a team take turns naming and revealing stones.

Why You Should Play Tellstones: King’s Gambit

Riot Games is well-known for its online battle game League of Legends, which has been around for over a decade (!), though I’ll admit I’ve never actually played it myself. It has a huge following, and has spun off other games and other media. Tellstones: King’s Gambit is set in LoL‘s world of Runeterra, with the idea that Tellstones is a common game with a lot of variations throughout the world. King’s Gambit is the one played in Demacia, a region that values duty and honor among its knights. The story told in the rulebook is that Tellstones is sometimes used to settle disputes without bloodshed.

Well, I haven’t settled any real disputes with Tellstones myself, and I’m not sure that any of my kids would find it a fair way to make a decision, because so far they haven’t been able to beat me at the game. To a large degree, that has to do with memory and attention, and I’m currently better at my kids on both fronts (though ask me again in a couple decades). Tellstones is at its core a game of skill—though I’ll have a bit more to say on that—so if you’re able to pay attention and remember things, you’re simply going to be better at it than somebody who can’t hold the order of several hidden items in their head.

One thing I found interesting about Tellstones is that as you add stones to the line, hide them, or swap them, you make the decisions but your opponent is the one who physically handles the stones. I thought that was kind of an odd thing at first, and chalked it up to a bit of ritual as part of the theme, like the way that the rulebook provides the exact wording of boasts and responses. But once I played it, I realized that it’s also a way to balance out the memory between players a little. If I physically pick up and move pieces or flip them face-down, that action reinforces the memory a little more than if I just watch somebody else do it. I’ve found this to be the case in playing digital games the past few months—I have more trouble keeping track of things that I’ve just clicked on and moved around than I usually do with physical objects.

That physical aspect of the game means that, although you can play Tellstones over video, the player who’s physically present has an advantage over the player who is watching the pieces through the screen. If both players had a copy of the game and duplicated the gameplay, then I think that would make it a little more fair, and then the game could work fairly well over a screen.

The rulebook—in the ironically titled “Unwritten Rules” section—talks about some other tactics that could mix things up a bit, and introduce other skills aside from memory. For instance, there’s no prohibition from shouting out incorrect answers while your opponent is trying to fulfill a boast or a challenge. The video trailer mentions a few ways that you can distract or confuse your opponents, with Cithria’s father advising her to “play the player, dear, not the game.” If you can figure out what your opponent doesn’t know, then you may be able to play on that to score some points, even if you don’t know where the stones are yourself. In that sense, Tellstones is a bit like poker—it’s a fairly simple ruleset but the real game is figuring out your opponent.

Will Tellstones catch on and become the sort of thing somebody might throw in a bag and play while waiting for a meal at a cafe (you know those places where we used to go out to eat before 2020)? Will fans make their own homemade stones with their own culturally significant icons? Will we see countless regional variations, like those hinted at in the rulebook?

It’s hard to say—partly because I don’t know who the target audience is for Tellstones. I imagine the people first in line to order it will be League of Legends fans (or fans of other Riot Games titles), but I don’t know what sort of overlap they have with traditional tabletop games, and especially a game of this type. I’ll admit, though, that because I haven’t played League of Legends, I’m just speculating. Riot Games’ first foray into tabletop games was the cooperative programming game Mechs vs. Minions, which was a huge box full of miniatures and boards and cards, and it did extremely well. It also felt like a very modern game, comparable to a lot of the other popular games currently on the market. Tellstones: King’s Gambit feels more like a classic, the sort of thing that could have existed ages ago. That’s a cool feat, but I don’t know if it will do quite as well in a world where everyone is chasing the new hotness.

It reminds me a bit of Tak, a game designed by James Ernest based on Patrick Rothfuss’ Kingkiller Chronicles. That, also, was designed as a game that existed in a fictional world, with its own customs and traditions. It’s a chess-like game that uses a fairly simple set of pieces, and I have seen fan-made versions of it, and it does feel like something that could have existed for hundreds of years—or that could still be played long in the future. Whether that’s actually the case depends on how much people are actually playing it, rather than just buying it because they’re Patrick Rothfuss fans. I think the same may be true for Tellstones. For me, I did not have that emotional connection to the theme, so l’m considering it primarily as a standalone game.

For now, though, I can say that Tellstones: King’s Gambit is a beautiful game with deceptively simple rules. It’s an elegant battle of wits but may not appeal to gamers who prefer more complexity or bells and whistles in their games, and it doesn’t necessarily seem like it’s introducing new gaming concepts. If you appreciate quality components and games with a timeless feel, it definitely fits the bill.

To find out more, or to place an order, visit the Tellstones: King’s Gambit website! 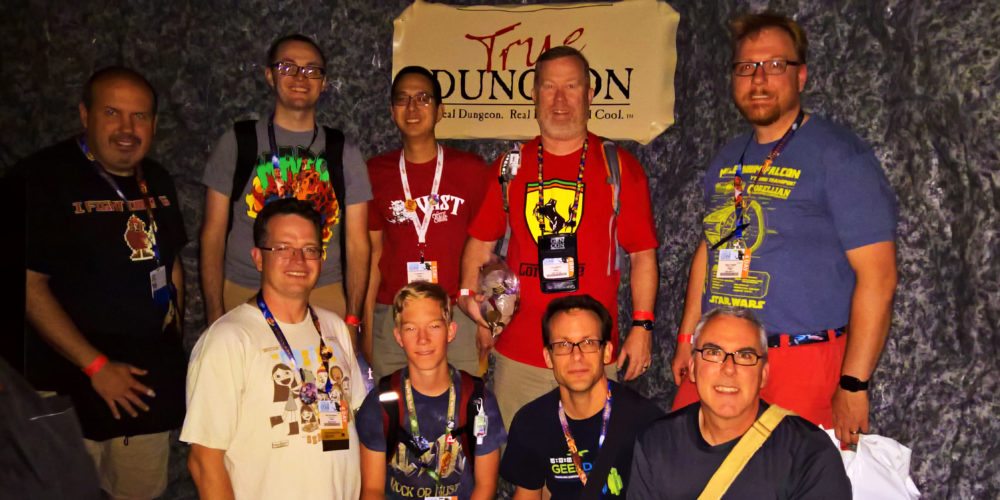 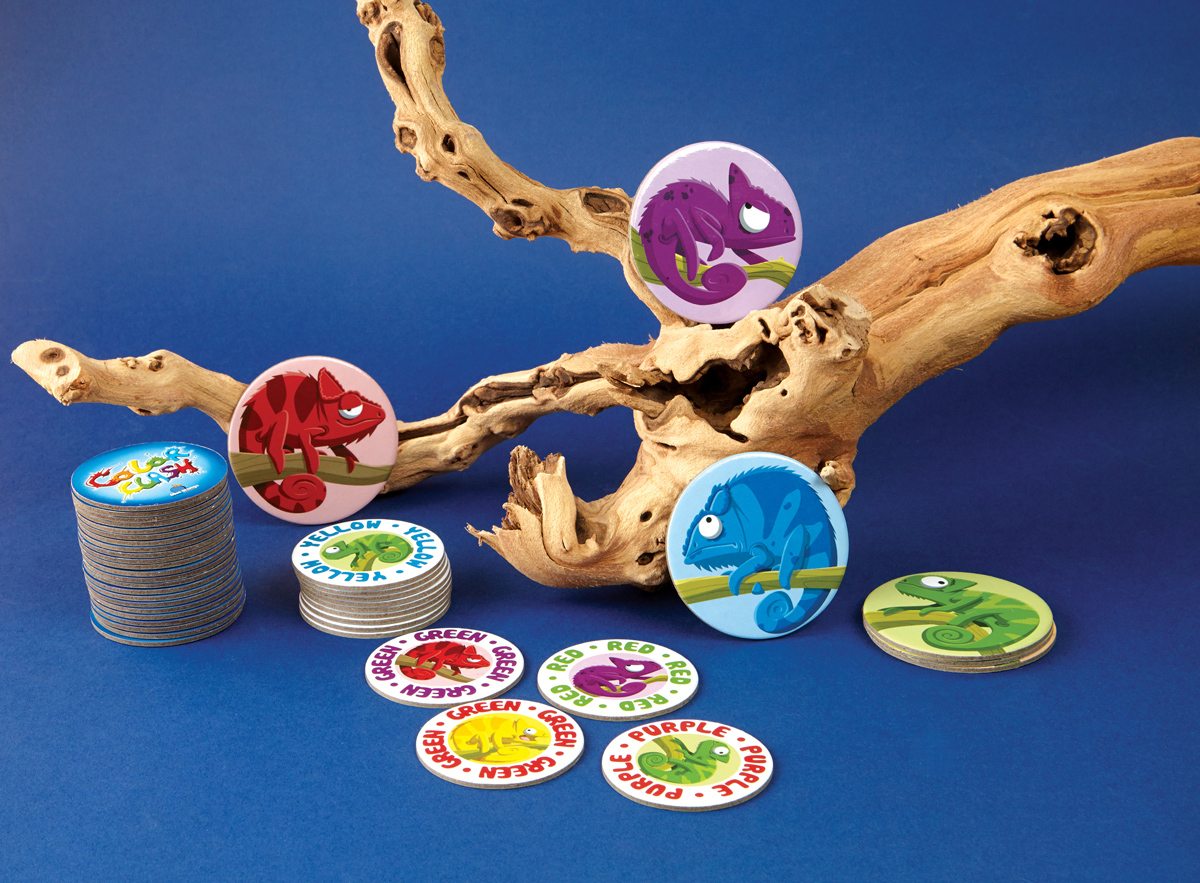