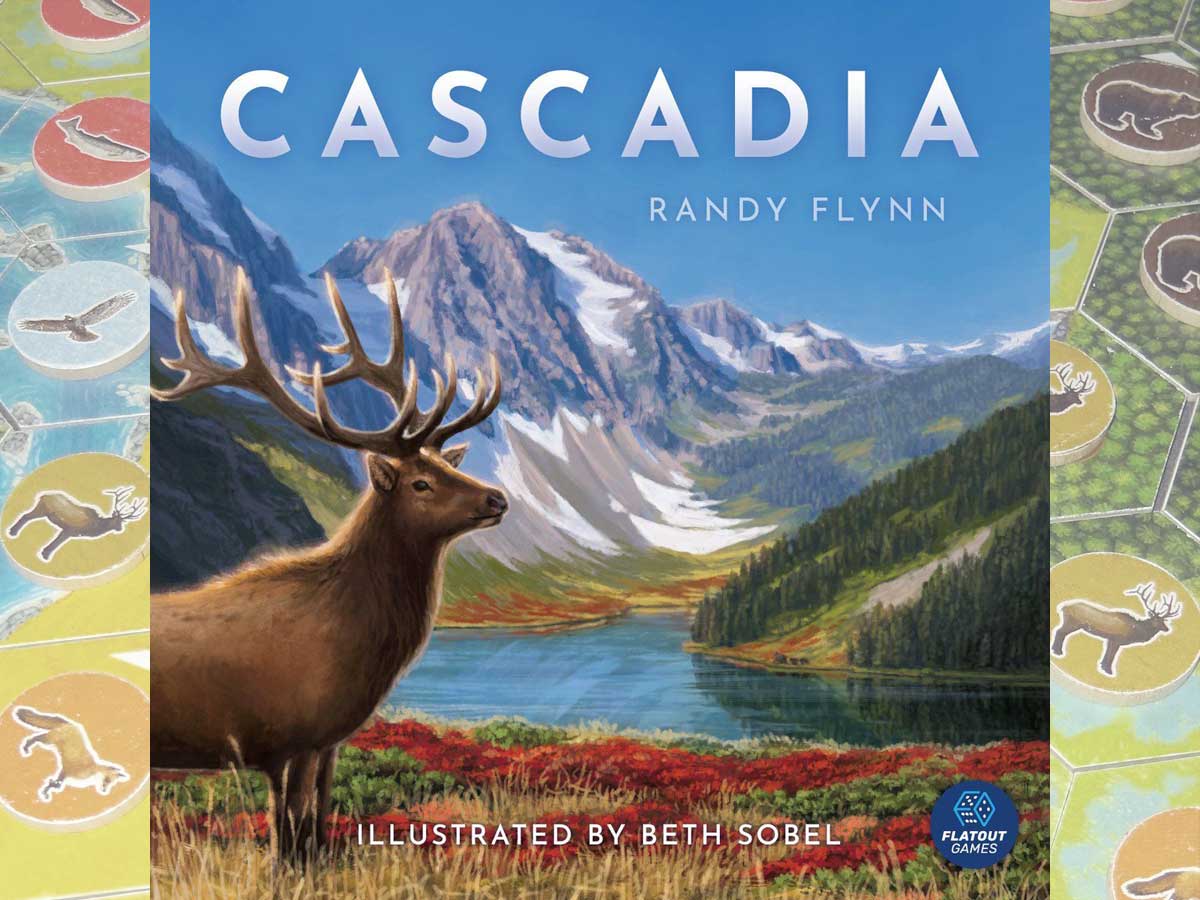 Expand the terrain of the Pacific Northwest and create the best habitats for wildlife in Cascadia.

Cascadia is a tile-laying game for 1 to 4 players, ages 14 and up, and takes about 30 to 45 minutes to play. It’s currently seeking funding on Kickstarter, with a pledge level of $29 for a copy of the game. There’s also a “Founder’s Edition” tier at $199 that gets you a handmade prototype as soon as the campaign ends, plus two copies of the finished game, and some other bonuses. Although the box says ages 14 and up, my 7-year-old was able to learn it and really enjoyed it. Some of the wildlife scoring cards may be a bit trickier than others, but the game rules themselves aren’t too difficult; the final game will also include some basic and intermediate variants to make scoring a little simpler, so I think the game is suitable for younger players.

Cascadia was designed by Randy Flynn and published by Flatout Games, with illustrations by Beth Sobel.

Note: My review is based on a prototype copy (and Tabletop Simulator), so it is subject to change and may not reflect final component quality. The nature tokens will either be cardboard or wooden piece shaped like pine cones, but the rest of the artwork in the game is mostly complete. There may be additional components added if stretch goals are reached.

The land tiles are hexagonal tiles with various types of terrain on them—forest, river, wetland, prairie, and mountain—each with a distinctive color and pattern. Most tiles are a mix of two terrains with two or three wildlife icons on them, but there are also a few “keystone” tiles that have a single terrain type and a single wildlife icon. All of the various possible combinations are represented, which leads to some amusing situations like the rare “prairie salmon.”

The starter land tiles are made of three attached hexes, and ensure that each player has at least one of each wildlife and one of each terrain type, along with one keystone.

The wildlife tokens are discs that match the icons, with the animal illustration on a solid colored background. The tokens are large enough to just about cover up the icons on the land tiles, even the groups of three icons.

The illustrations in the game—which also include the scoring cards—are by Beth Sobel, who does an excellent job as always. The animals look realistic on the cards, and the terrain has some nice details but is stylized for ease of gameplay.

The scoring cards are tarot-sized, giving room to showcase Sobel’s artwork and still provide illustrations of the scoring examples.

How to Play Cascadia

The goal of the game is to score the most points by building large contiguous regions and arranging wildlife in them.

Randomly select one wildlife scoring card for each animal type, and return the rest to the box. The cards are marked A, B, and C—the A cards are the simplest and are recommended for first-time players. Place the scoring cards within view of all the players.

Shuffle the land tiles face-down, and make a supply of tiles based on the number of players (20 per player plus 3). Put the wildlife tokens in the bag and mix them up. Place the nature tokens nearby in a supply.

Reveal 4 land tiles in a row, and draw 4 wildlife tokens from the bag, placing one next to each of the land tiles.

Give each player a starter land tile at random. Each player will build their own map, so allow room to add tiles in all directions. The player who most recently saw wildlife goes first.

On your turn, you take a land tile and the wildlife token next to it, and place those into your environment. The land tiles may be placed anywhere as long as it’s attached to your existing map, but you will get bonuses for having contiguous regions of the same terrain type. Then, you place the wildlife token onto an empty land tile that has a matching wildlife icon. If you don’t have any available wildlife icons or you decide you don’t want it, you discard the token back into the bag. If the wildlife token is placed on a keystone tile, then you also take a nature token from the supply.

When there aren’t enough land tiles to refill the row, the game ends. (This will happen when every player has had 20 turns.)

Each animal scores differently, according to its card. The salmon score for runs of a certain length. Elk score for large groups, though there are sometimes restrictions on the shape of the group. Hawks don’t like to be next to other hawks. Bears will score for a particular group size. Foxes score based on what is adjacent to them.

Unspent nature tokens are 1 point each.

Each player scores for the largest contiguous group of each terrain type, 1 point per tile. Note that a group is connected if it shares a matching edge, not if it only touches on a corner.

The prototype did not have completed solo rules yet, but it will involve some sort of “conveyor belt” system where land tiles and wildlife tokens are removed automatically, simulating other players’ choices.

Why You Should Play Cascadia

Flatout Games is a small publisher based in Seattle, and they’re a name that you’ll want to watch. One of their first games, Point Salad, is a GeekDad favorite and was picked up by AEG, as was their quilt-puzzle game Calico (which was delivered to backers this summer). Dollars to Donuts, designed by the Flatout Games team and published by Crafty Games, just wrapped up a successful Kickstarter last weekend. Although not all of their games have the same designers, I’m starting to see some similarities in the types of games they choose, and they tend to line up with a lot of the things I like in games, too: games that have a puzzly feel to them, easy-to-learn rules, and some brain-burning choices.

Cascadia fits that description pretty well. It’s another tile-laying game (like Calico and Dollars to Donuts), this time about building out your own little version of the Pacific Northwest. Flatout Games (and the artist, Beth Sobel) are all from this area, and as a Portlander I’m pretty pleased with the theme, too. This one may be the most family-friendly of their tile-laying games so far, because the rules—take a tile and a token, place them in your map—are very simple, but the different options for scoring cards can still present some challenging choices to make. I also appreciate that there will be a family and intermediate variants—that will make it even easier to explain to less experienced players.

My seven-year-old took to it quickly, and has been requesting it frequently ever since she beat me at her first time playing it. (I’ve managed to win a few times now, but she’s pretty good.) The gameplay is intuitive: you’re not required to match up terrain types, but you’ll score more points for making large regions, and it’s a natural tendency to match up the terrain anyway. The land tiles are clearly marked for which animals can be placed on each one, then the tokens cover up the icons when you no longer need to see them.

So, what’s the challenge? Well, the first one is simply choosing a set from the row. You might get lucky and grab a keystone tile with the matching wildlife, but quite often you’re going to have to choose between a land tile that works really well for your map and a wildlife token that you really want. There’s no guarantee that you’ll be able to (or even want to) place your token on the land tile that you just drew. At other times, you’ll find that the land tile that connects two terrains just perfectly has the wrong wildlife icons on it, and will block your chance to score the maximum points for an animal.

Depending on the wildlife scoring cards, some of the animals may compete with each other. For instance, the salmon and elk tend to want large contiguous groups. But what happens if you have the fox that wants to be next to as many different animals as possible? Arranging your map so that the fox is at the nexus of all four other animals can be incredibly tricky and may take a bit of luck.

The keystone tiles are an interesting feature. They have only one terrain type, so they can be good for building out a terrain type but they block all the other types. Since you’ll score points per tile for your biggest regions, a keystone tile could actually cost you a point for a neighboring terrain type. But they’re also the only way to get nature tokens, if you can acquire the matching wildlife (and assuming you actually want to place it there). The nature tokens, aside from being worth a point, can be extremely useful in the right situation. I particularly like the ability to choose a land tile and a wildlife token that aren’t paired in the row, because it opens up a lot more options. The trick is to make sure that whatever you’re spending it on will get you at least 1 more point than you would have had otherwise.

I like the variety in the wildlife scoring cards—they mix things up just a little, without changing the game drastically, so that each animal still has its own “personality” but the details vary from game to game. There’s one hawk card that was a little confusing to me, but apparently it may get a reworking; the rest were easily understood (if not easily achieved).

Cascadia reminded me a little bit of another game about matching up terrains and making habitats for animals: Planet. Planet also used some similar colors and terrain types, and you’re also trying to match up terrains while keeping an eye on how big your opponent’s mountains and forests are. It also involves drafting the terrain tiles that you add to your own maps. The way that you get animals is completely different, but in both games you’re trying to set up your environments for specific animals to live in.

If you’ve been reading my reviews for a while, you know that I’m a fan of tile-laying games. I like the puzzle of figuring out the best place to add pieces. The terrain-wildlife combinations of Cascadia make for a nice puzzle that works in two separate layers, a little like Overlord, so that you’re forced to make trade-offs and can’t always optimize both at the same time. If you like these sorts of spatial reasoning games, you should consider a trip to Casadia.

For more information or to make a pledge, visit the Cascadia Kickstarter page! 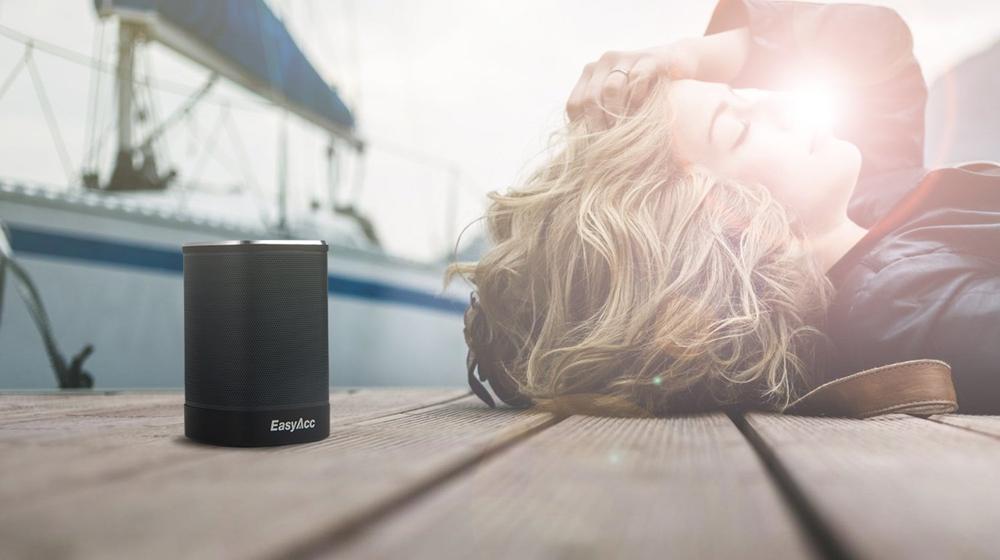 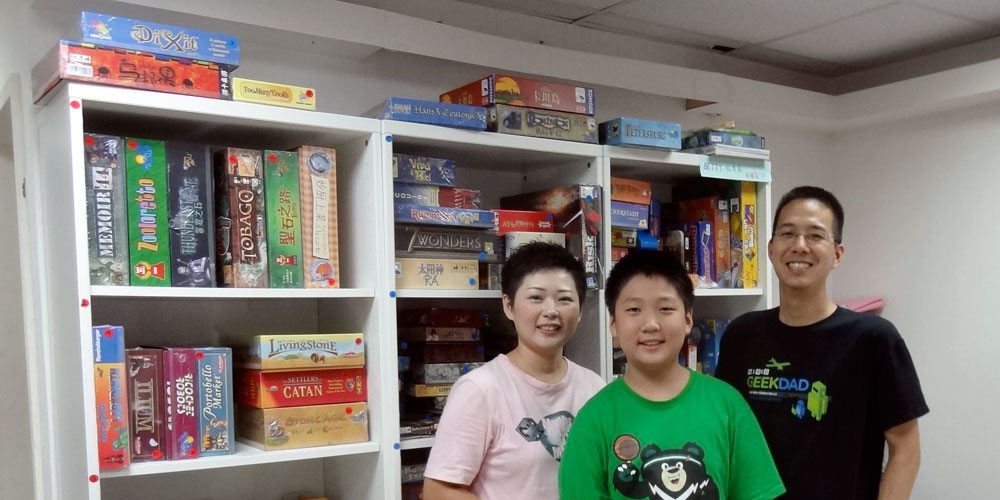 Hunting Down Tabletop Games in Taiwan 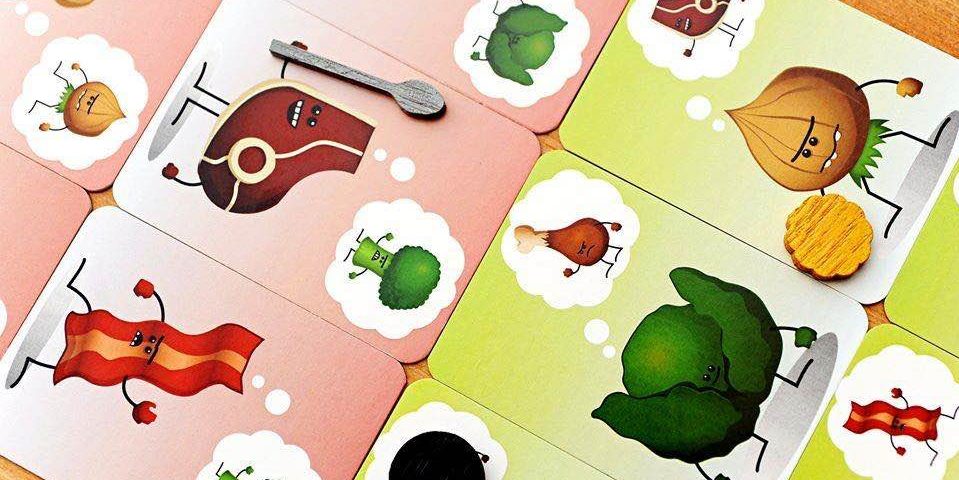 Kickstarter Tabletop Alert: 'Foodfighters' Is a Strategic Game for All Ages