Derek Fridolfs and Dustin Nguyen have been DC mainstays for years thanks to their popular Li’l Gotham books that reinvented the characters of Gotham in chibi-fied kid-friendly forms. Their year-long series took on the holidays in the way only Gotham can, but now they’re taking on a bigger challenge—their first graphic novel.

Batman Tales: Once Upon a Crime is a four-part OGN released through the DC Kids line, reinventing a quartet of classic tales through the filter of Gotham’s oddest residents. With stories based on Pinnochio, Alice in Wonderland, The Princess and the Pea, and The Snow Queen, it’s guaranteed to be another classic in DC’s growing line of OGNs.

Derek and Dustin were kind enough to answer some questions for GeekDad, so below you’ll find our interview, along with preview pages from “The Snow Queen,” a unique take on the classic Hans Christian Andersen story featuring Mr. Freeze. Batman Tales: Once Upon a Crime is being released on February 12th, 2020 in comic book stores and on February 18th everywhere.

GeekDad: The first Batman: Li’l Gotham series was done in single issues. What was it like to transition from creating single issues to crafting a self-contained OGN? How did it affect your creative process?

Derek: We originally set up the stories as a four-issue miniseries. Once it was decided that Batman Tales: Once Upon a Crime would be an OGN, I still wanted to keep each story as its own separate thing, like an anthology of fairy tales. While characters would come and go throughout each story, it wouldn’t be one long connected story. So, we got the best of both formats in a way.

Dustin: From the art side, it actually made my schedule a bit more relaxed. It allowed me to take my time and really tell the story the way we wanted it.

GeekDad: “The Snow Queen” is very different from anything else you’ve done—it’s a melancholy illustrated prose story instead of a lighthearted comic. What inspired this twist on your usual format?

Derek: Part of the fun of our original run on Batman: Li’l Gotham was to play around with the art style from time to time, and we wanted to continue to do that with Batman Tales: Once Upon a Crime. Since it’s very common for fairy tales to be given the children’s book treatment, with one illustration per page and limited narration, it seemed like the ideal format for this story. Plus, the tale packs its own unique visual punch that makes it stand out as the ending to this collection. It was the story I was most excited to see happen, and Dustin knocked it out of the park with his lush watercolors!

Dustin: Derek and I had the idea that this story was to be the one true storybook verse of the entire OGN, where we would use only spot illustrations and no panels. Plus, I really enjoyed painting that snowy landscape, so it was an easy choice.

GeekDad: Most of the lead characters in these stories made perfect fits for their fairy tale comparisons, especially the naughty Damian as Pinocchio. But it was a huge surprise to see the proper Alfred replacing Alice in Wonderland. What inspired you to put him in this role?

Derek: I’d be lying if I didn’t say that the pun of swapping out Alice for Alfred in the title wasn’t the main motivating factor. As soon as I heard the sound of it, I was curious to see what a proper gentleman like Pennyworth would think of the absurdity of Wonderland. Then it just expanded from there, to have him become the hero to rescue the rest of the Bat-Family. Plus, I always enjoy any chance to write about Alfred and give him a leading role.

GeekDad: You used a lot of the secondary Batman rogues like Clock King and Humpty Dumpty in surprise roles in this book. Who’s your favorite B-list Bat-rogue and how do they fit into the world of Batman Tales: Once Upon a Crime and/or Batman: Li’l Gotham?

Derek: I am definitely partial to the Clock King, any time I can fit him into a story. He has a great visual theme, and of course, being able to use a lot of time-related puns can’t hurt. Also, there’s a scene with a lot of the d-list villains making cameos. It is always great to poke fun at the truly absurd villains in Batman’s history.

While not a rogue, I can’t fail to mention the joy in being able to bring back Colin Wilkes again. He’s been a favorite supporting character going back to his creation during our run on Batman: Streets of Gotham. It’s nice to have a friend for Damian that’s his own age since he’s usually just running around doing the hero thing with adults much older than he is. So any chance to have Colin show up makes for a nice pairing.

Dustin: I’d honestly say all b-list Bat-rogues fit in this world. They’re just so colorful and whimsical. I’m more amazed that they fit into the normal Batman books.

GeekDad: You have mostly stuck with Gotham characters in your stories, but are there any other characters from around the DCU who you’d love to incorporate into future books?

Derek:  We’ve been able to incorporate a lot of cameos from all over the DC universe during our Batman: Li’l Gotham run, including members of the Justice League, Lobo, and Darkseid, to name a few. It’s hard to say who might show up next. I’ve always enjoyed Jack Kirby’s Fourth World characters. Or even having a future related story with the Legion of Super-Heroes. But it’s always a matter of how any of these characters might fit into a scene or a story. Half the fun of working with Dustin on this is seeing all the additional characters and things he’s able to sneak into the backgrounds just because it’s fun for him to draw.

Dustin: We had an idea for titles like Mini-tropolis and Smallerville, so we’ll see! 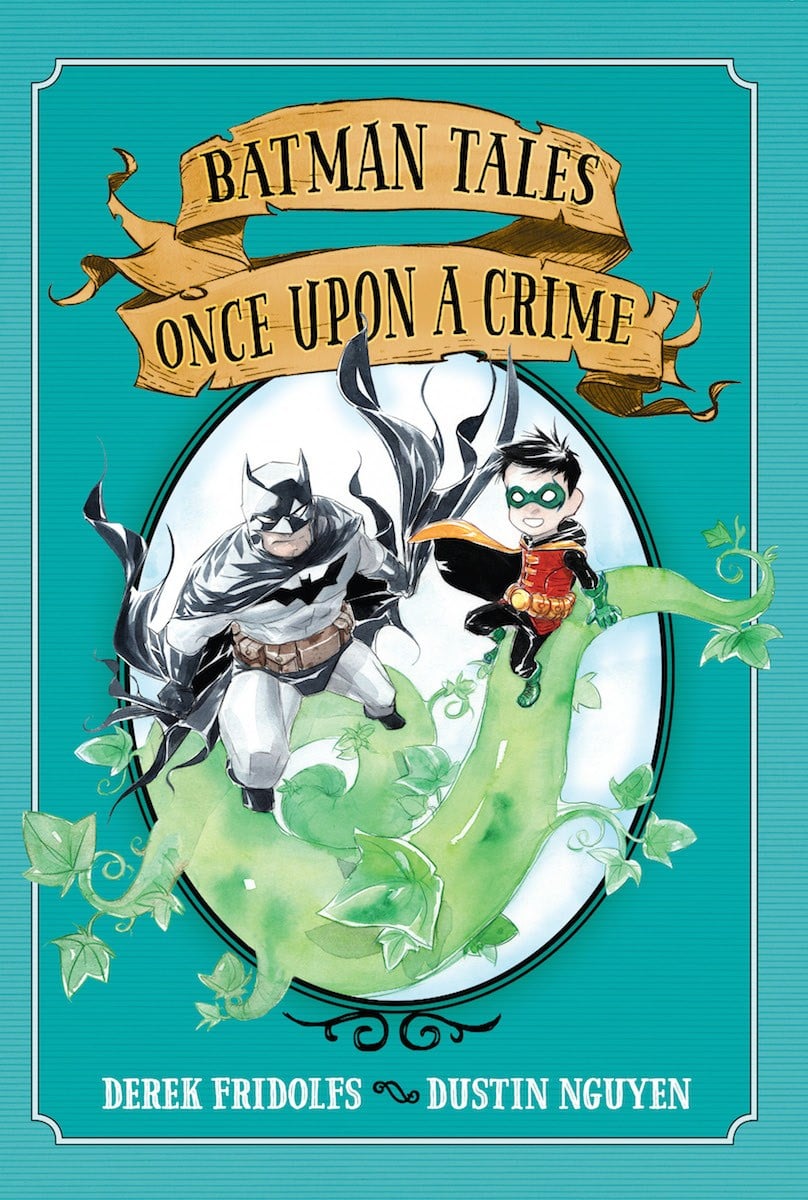