Ray: There’s only one more issue before this wildly inventive teen superhero satire reaches its conclusion, and Humphries and Quinones are determined to pack as many references as they can into Dial H for Hero #11 and the rest this series before the curtain falls.

Fans of Jeff Lemire, Jack Kirby, and Tom Scioli might see tributes in this issue, but the story and its brilliant art wouldn’t work nearly as well without Humphries’ well-fleshed out teen leads.

When we last left off, Miguel had succumbed to the temptation of Mister Thunderbolt and agreed to work with him, using one of the Dials to transform into four distinct superheroes patterned after the Reign of the Superman leads. That’s thrust Summer into the unexpected position of being the heroic lead for Dial H for Hero #11, and the story opens with a powerful prologue to her childhood as she saw her father taken away to prison for a failed scheme involving opioid dealing. One underrated element of this book is how it’s really delved into the trauma its main characters faced before their big adventure.

Joe Quinones continues to stun on this series, especially when depicting the 90s-stylized heroes that Miguel turns into. If the tribute to this classic Superman story wasn’t enough, another Superman classic gets a homage when Miguel unites back into two heroes – before one more shocking betrayal from Mister Thunderbolt as he puts his final plan into motion.

I was a little worried about Miguel taking a heel turn last issue, but this issue makes clearer that it’s a result of impulsive decisions due to anger and he still cares about Summer enough to pull back from the brink. The anime-inspired version of Lolo Kick You that appears this issue is great, although I kind of wish she got to transform into more original characters like Miguel does.

Look for some incredible cameos towards the end of the issue, and one hell of a cliffhanger leading into the final issue. If Humphries and Quinones stick the landing, and I have no reason to believe they won’t, this should go down as an all-time classic. 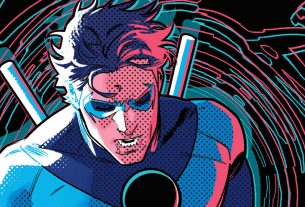