Ray: Of the two Hill House books so far, The Dollhouse Family #2, by a legendary creative team, is weaving the story that will haunt my nightmares for years to come. That’s because it has the perfect blend of supernatural horror and the horrors that real kids encounter every day.

When we last left off, young Alice was tempted by the mysterious force inside the dollhouse to sacrifice her abusive father and join the family inside forever. But she decided to take matters into her own hands and kill her father herself – a choice that backfires when her mother is implicated and takes the blame to protect her daughter. Alice winds up in a children’s home where she’s tormented for years by a fellow resident – desperate to escape but too scared to deal with the dollhouse again.

It’s only when another tragedy befalls her that she gives in and joins the dollhouse family again. The bucolic victorian setting of the house is brilliantly contrasted with the horrific thing that lives inside the Black Room.

There’s one scene at the end of The Dollhouse Family #2 that’s one of the most effective jump scares I’ve seen in a comic in a while, but the flashback segments are almost as effective. Last month’s strange segment of a man whose land surveying mission lands him in a mysterious cave with an ancient power finally fits into the story better this month as we discover that it’s the origin story of one of the residents of the house.

The slow-burn horror of this title is like a concert of creepiness occasionally punctuated by a sharp note of terror, and it’s always a treat to watch a creative team of this caliber on an original concept. The backup, Sea Dogs, continues to be an intriguing tale of seafaring supernatural carnage, but the pacing of two-page segments holds it back. This issue’s segment is essentially a business negotiation with no real scares. I wonder if it’ll eventually get collected as an oversized one-shot after it’s concluded. 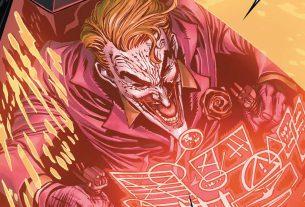