Ray: Changing up the cast has done wonders for this title, including Justice League Odyssey #17.  An overly dense narrative transforming Cyborg, Starfire, and Azrael into Gods had been replaced by an entertaining Jessica Cruz underdog story.

Her motley crew of Blackfire, Orion, a surprisingly tame Dex-Starr, and a scientist named Hax has survived an attack by an ancient alien species that precedes even Darkseid, but now they’re stranded in space. That leads to the team splitting up – always a good idea in a horror-accented space story – to salvage what they can.

Hax, Blackfire, and their surly cat head to the ship surface to recover parts, but quickly find themselves stalked by something or someone mysterious. Jessica, meanwhile, faces off with Orion in a tense conversation where she tries to get information out of him and he implies that they may be responsible for Darkseid’s rampage. After all, he was stable as ruler of Apokalips until the Justice League defeated him and led to his reincarnation.

Things take a dramatic turn with the arrival of Gamma Knife, a young antihero with ties to the obscure DC hero Space Ranger. She’s a salvage agent of a mysterious crime boss looking to strip the ship for parts, and it doesn’t take long for her to come into conflict with the team. She’s an interesting new agent of chaos for the series, but it seems pretty clear she’ll wind up on the good guys’ side.

This mostly feels like Dirty Dozen in space at this point, with a ragtag group of underdogs battling to survive against a much bigger threat. The title seems to have almost forgotten about the other three members of the cast, so when Cyborg shows up again in his upgraded and corrupted form, it’s almost a little jarring. I would read an entire comic about Jessica just trying to wrangle Dex-Starr, but this comic is definitely more entertaining than it was when it was so much more plot-focused. 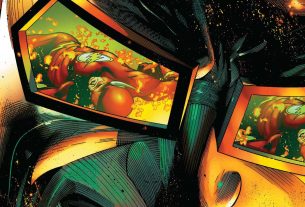