Ray: Last year, Tim Seeley surprised everyone with one of the oddest intra-company crossovers of all time, as he pitted the heroes of Eternia against the grim-and-gritty DC icons of the Injustice-verse.

That was the first time the He-Man characters had left their dimension, and now he’s back to continue that adventure minus the DC characters but plus a LOT more He-Men in He-Man and the Masters of the Multiverse #1. The Multiversal crossover has been a very popular element in recent years, from Spider-Verse to the last issue of Scooby Doo Team-Up, but this is a new wrinkle that kicks off with a visit to another world where the Masters of the Universe are under assault by a more ruthless Skeletor. But it’s not Skeletor who’s the main threat – it’s another He-Man with ashy skin and blood red eyes, known as Anti-He-Man and matching from one universe to another to absorb the power of Greyskull until he’s the only one left.

What makes this issue stand out above your standard He-Man comic is the identity of the lead – it’s Prince Keldor, better known as Skeletor in most worlds.

The Uncle of Anti-He-Man is a force for good on his dying world, although he does seem to take a little too much joy in tweaking his regal older brother. His blue skin and attitude remind me a lot of another younger brother of a king who likes playing pranks, but he might also be the most important person in the multiverse. After a hilarious visit from a Chibi-He-Man who immediately assumes Keldor is a villain, he’s informed that his nephew isn’t dead – and is in fact rampaging across the multiverse. And since in all other worlds, He-Man always beats Skeletor, this Earth-3 variant may be the only place where that doesn’t hold true.

It’s not the best thing to come out of this line of characters (that would be the phenomenal current She-Ra reboot on Netflix), but it’s a worthy successor to the last mini and further proof of how much fun Seeley has playing around with these characters. 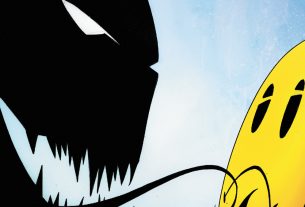 1 thought on “Review – He-Man and the Masters of the Multiverse #1: The Anti-World”