Ray: Bryan Hill’s international Bat-spin-off continues to be a tale of two books in Batman and the Outsiders #7, and it’s improving as the focus on the Bat-family members and their allies increases. The team is split now, with Black Lightning and Katana ferrying victim-turned-supervillain Sofia back to the US, while Cassandra Cain is on the trail of the captured Duke Thomas.

Duke is in the custody of the villainous Ishmael, a true believer of Ra’s Al Ghul who is torturing him in an attempt to unlock a hidden aspect of his powers. These segments are the weakest, mainly because – my GOD, Ishmael is still every element of a cliched 1990s villain. He monologues like a video game boss and his origin story mostly seems to be that he was in the Lazarus Pit. Fortunately, Duke is a strong character and Hill manages to keep his grit compelling even as he faces near-impossible odds. And most of the other characters are in great stories.

Hill has always had a lot of fun with the banter between Jefferson and Tatsu, as we saw in the recent annual, and here they wind up on a plane together babysitting a teenage assassin. Their ally Kaliber even jokes about the romantic tension between them – of the two 90s characters, Kaliber is definitely the more entertaining and there’s a decent twist with him this issue.

But the undisputed star of this issue is Cassandra Cain as she tracks down her friend (brother, if you subscribe to my opinion) and fights her way through a heavily guarded train and eventually Ishmael himself. Cass’ moral code is probably the most important element of the character, and she gets an all-time iconic line towards the end of Batman and the Outsiders #7. This title tries to do a lot, and it doesn’t always succeed, but the ambition is coming together into something pretty compelling. I’m hoping this next arc focused on Duke doubles down on those strengths.

Corrina: This series started with the Outsiders joining together to save Sofia and allow her to choose her own destiny. It’s not going particularly well. Sofia’s been brainwashed by Ra’s Al Ghul and a person they thought was their ally, Kaliber, is definitely not their ally, and their other young members, Duke and Cassandra, are in deep trouble.

All this makes for good storytelling and I hope it’s going to lead to a team of friends or, basically, a found family but it’s been a tough road for our heroes. Bur, right now, I’m a bit worried for Duke or, I would be, if I didnt have faith in the writer of the series.

However, the stand-out segment of Batman & the Outsiders #7 belongs to Cassandra Cain. Though James Tynion IV handled her well in his Detective Comics run, Cassandra hasn’t had the spotlight nearly enough over the years. Her attack on the truck carrying Duke was classic Cassandra/Batgirl action, so much so that I almost cheered.

I’d recommend the issue just for that alone. 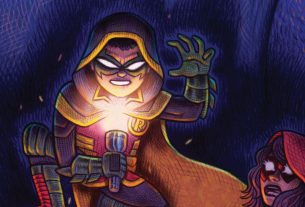