Ray: Unlike its sibling title, Teen Titans: Burning Rage #3 continues to be a perfectly enjoyable Titans book that features an iconic group of heroes – the core five sans Cyborg – and pits them against popular Titans villains that will be familiar to most fans of the comic and the cartoon.

It’s a pretty ideal Walmart intro comic, although it leans a little too much on common tropes like Raven losing control of her powers in the intro segment. With HIVE and the Fearsome Five teaming up to launch an attack on San Francisco, the Titans have their hands full and it’s Beast Boy who plays the leading role this issue. With a bomb set to go off, he’s forced to push his alien-shifting powers to the limit and for a while it seems he’s sacrificed himself – and while no reader is likely to buy this, the explanation of how he survived is one of the most clever uses of shape-shifting I’ve seen in a while.

The second segment of the story stood out more for me, as the heroes take the battle to HIVE’s secret island. Disruptor revealing his whole plan in a monologue to give them the clue to head there was a little much, but supervillains gonna supervillain.

The fast-paced action segment is boosted by one of my favorite tropes – heroes teaming up with villains against the worse villains. The Fearsome Five aren’t good guys, but when you threaten the entire world they tend to see reason. The Titans here actually seem like friends and allies, which is a breath of fresh air, and Scot Eaton’s art gives them all great designs that feel like the classic comics with some modern flair.

Unlike the other Walmart titles, this one is wrapping up its first story and moving into a new one with Hawk and Dove next – a smart move to explore the whole Titans world and introduce new readers to some of their less-known characters. 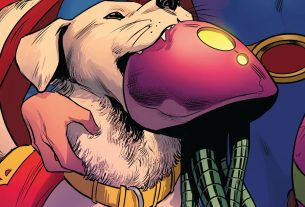