Ray: The Joker: Year of the Villian #1 is the fifth Year of the Villain one-shot. It continues the pattern of intimate, creepy done-in-ones spotlighting the DCU’s deadliest villains, but this one has a heavyweight name attached – iconic horror director John Carpenter putting his own spin on the Joker.

That’s a challenge in itself – everyone has their own spin on the Joker, and it’s increasingly hard to stand out in the crowd. I’m not sure how much of this story Carpenter wrote and how much was co-writer Anthony Burch, but I did find this one of the more effective Joker stories in recent memories thanks to a neat trick – showing us how terrifying and unpredictable Joker is through the eyes of someone much saner than him.

That would be a hapless delinquent who had a brief stint as a member of the Royal Flush Gang before City of Bane happened and Gotham went to hell. The random young crook gets snapped up by Joker and forced into a terrifying role play where Joker dresses up as Batman and torments his new “Robin”.

We’ve seen some Joker stories like this before, where he play-acts as a twisted version of his arch-nemesis, but he rarely commits to the schtick as much as here. One minute he’ll be taking out Condiment King for robbing a convenience store, and the next he’s about to shoot the clerk because his prices are “criminal”.

The unpredictability, and his sidekick’s terror are what really sells the story. A subplot involving the Enchantress falls flat – her role in the story is never made clear, as she’s not a Gotham villain – but the hints dropped about the main character’s past are interesting and lead to an emotional coda.

This could have been a very depressing story – and maybe would have been if the Joker was portrayed as deadly as he usually is – but there’s a surprisingly more optimistic ending than is normal for these one-shots. I don’t think this story upgraded Joker like it did Riddler, Sinestro, Black Mask, or even Luthor, but it’s a tense and creepy one-shot with a strong horror vibe. 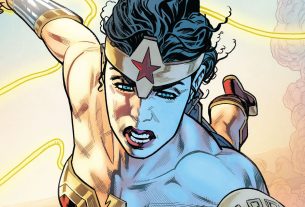 1 thought on “Review – The Joker: Year of the Villain #1: Worst Job in Gotham”