Ray: Black Hammer/Justice League has set up some fascinating stuff, even though it takes place far in the past of the Black Hammer universe (and features a group of characters whose main story might have concluded in recent months).

When we last left off, Golden Gail had finally gotten free of the curse that kept her as a little girl, returning to her true form thanks to the DCU’s unique magical signature. However, the use of otherdimensional magic quickly alerts the Spectre – and if you thought the Justice League was unfriendly to these visitors, you’ve seen nothing else. Spectre views all otherdimensional magic as as a foreign enemy, and orders the Black Hammer refugees out before he kills them. Meanwhile, last issue’s other big twist saw the Justice League members find the remnants of Talky-Walky buried in the shed – and investigating her data reveals that the time they think they spent on the Farm isn’t what it appears to be.

The best part of Black Hammer/Justice League: Hammer of Justice #4, though, continues to be the segment featuring Colonel Weird, John Stewart, and the newly returned Flash. As they travel through the Para-Zone, filled with mysterious creatures and surreal landscapes, they eventually make their way to the location of the mastermind behind this whole affair. The reveal isn’t exactly a surprise, but it is a cool twist that elevates a frequently used but rarely used-well villain into a major threat behind a fascinating crossover event. More compelling, this seems to be a darker version of the character – who gives the characters a sadistic choice that threatens to turn the Black Hammer characters against each other.

Jeff Lemire is a master of the small character moments, even in the middle of a massive comic book event, and the last third of this event promises to wrap up another great arc of the Black Hammer mythology. 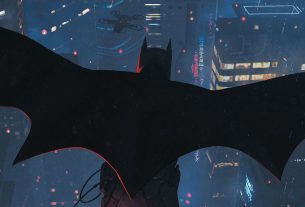