Ray: G. Willow Wilson’s final arc on Wonder Woman has a lot of things on its mind, grappling with the literal death of love even as Lex Luthor’s nihilistic purge of the DCU enters this title’s sphere in Wonder Woman #78. When we last left off, Aphrodite’s murder had multiple effects spiraling around the title – not only were Wonder Woman and Steve Trevor suddenly on the rocks, but Diana’s powers were mysteriously weakening due to her connection to love, letting Cheetah get the upper hand on her. The first part of this issue is essentially a single brutal beatdown, as Cheetah takes advantage of Diana’s sudden weakness and steals her gear, leaving her mostly powerless and wounded. Atlantiades and Steve come to the rescue, but it’s clear things are far from okay between them. Steve and Diana remember what the other meant to them, but they can’t express it or act on it somehow.

The personal impact of this curse is only half the story, as Etta Candy’s noticing the effects spreading across the population. Not only romantic love is dead – the basic love people have for their fellow humans went with it, removing what keeps people from doing things like running down pedestrians or robbing consignment stores. As one Diana’s enemies this issue says, Luthor’s given them the green light to embrace their worst instincts and this is just the cherry on top. The issue as a whole is rather dour, but it’s saved by a segment involving Veronica Cale – who has really had a resurgence under both Rucka and Wilson. Her first scene this issue is so out of villain 101 that she might as well be stroking a white cat, but the dialogue between her and Diana is always excellent and Wilson’s done well by really leaning on Cale’s one humanizing touch – which might be gone now unless they can restore love. I’m hoping Wilson gets to wrap up her current story before she goes, because she has some fascinating ideas here.

Corrina: I have to confess, I’m deeply uncomfortable with how defeated Diana behaves in Wonder Woman #78. I believe that’s part of the point of this story, to show Diana in despair. But she’s not proactive at all, even replying to Etta about being able to do nothing. I understand that’s the point of the story, to show what Diana is without love, but she basically has given up on everything in the blink of an eye.

On the other hand, the art team conveys her defeated attitude brilliantly, with slumped shoulders and other body language that shows how Cheetah’s victory weighs on Diana. And there’s a spectacular page as Cheetah uses the Godkiller sword to shatter the bracelets. (Or so it appears.)

Atlantiades is more pro-active, despite the death of their mother, heading off to help their flock, as they call the town where they’d settled. If Atlantiades can have some goals, some sense of duty, I’m not sure why Diana can’t do the same.

However, the scenes between Cale and Diana do crackle, as Diana calls in a favor to find out what Luthor did to up the power level of God-killer. It’s too bad, however, that we can’t scenes like this with Cheetah, who’s become a little one-note when she used to be more complicated.

Hopefully, this despair will eventually lead to a sort of triumph at the end of the run. 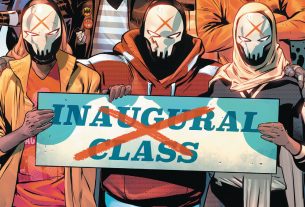