Ray: Wonder Twins started out as a lighthearted superhero satire focusing on a pair of teen interns to the Justice League, but as usually happens with Mark Russell, it turned out to have a LOT on its mind and this bittersweet final issue of the first arc, Wonder Twins #6, makes clear why it was expanded to a twelve-issue series. The last issue saw Polly Math break bad and team up with the Scrambler after her dad Filo seemed to die at the hands of a paranoid white woman. That wasn’t quite the truth, but it set off a series of events that led to the Scrambler becoming one of the deadliest villains in DCU history – starting by swapping the minds of one million people, on his way to eventually swapping the minds of everyone on earth into random new people. This is actually a horrific idea that would likely kill millions, but some of the fallout is hilarious – particularly the attempts of the President (not Trump, a generic bureaucrat type) trying to come to terms with the idea that he might be a normal person soon.

However, I do think Russell’s reach exceeds his grasp a little on this book. He’s trying to grapple with a lot of key issues here, including private prisons, Black Lives Matter, and corporate corruption, and he only had six issues to do it in. A lot of developments, like Polly’s heel turn, feel somewhat rushed. She and Jayna have a tense meeting where Jayna tries to get her to back out before it’s too late, but Polly can’t see past her own grief. The series obviously wants us to sympathize with her, but the problem is – she’s going to kill countless people out of her own grief. She needs to be stopped, but the irony is that the eventual solution leaves no room for helping her and only furthers the problems she was trying to fix in the first place. This comic is ultimately a tragedy, and that doesn’t always work with the offbeat tone. I’m hoping that in his second arc, Russell is able to refine his execution a little and deliver a strong new story that pushes the themes forward.

Corrina: As with his Flinstones, Russell tackles a lot of issues through satire. And, as with Flintstones, seriously horrible things happen (remember the prison massacre?) but they tend not to have much emotional fall-out for the main characters. Zan and Jayna feel bad for Polly and want to save the world but they also, at the same time, feel detached from the events. Byrne’s style reminds me of Ramona Fradon‘s art from the old SuperFriends comics with its deceptively simple images but it also makes me want to treat what happens in a more light-hearted way, even when it’s horrific. (Which may be part of the point.)

This is likely Russell’s style. There’s much that is good about it, as he has a keen eye for hypocrisy and knows just where to jab the needle so it hits the right target. But he also throws in stuff like “let’s swap seven million people” and it’s hard to tell if he’s being over-the-top or dead serious. Polly’s situation is dead serious, of course, and I want to hug her but, at the same time, she also decides killing people is a good way to deal with things. So it’s hard to tell what Russell’s point with Polly and her father is right now, or will be.

I’m glad this isn’t the last issue, however. 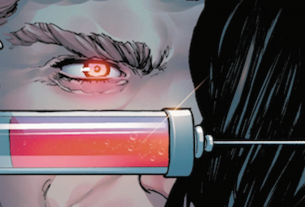 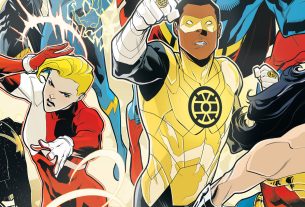