Ray: Freedom Fighters #7 is an interlude issue of sorts, as the Freedom Fighters recover from their most recent battle with Cyborg Overman – which ended with the capture of Human Bomb, who is currently being held captive by the sadistic grandson of Adolf Hitler.

While Human Bomb is tortured by the fat, slovenly villain (not subtle, this book), the remaining heroes hide out in the basement of a family of secret resistance fighters. While the wife is all on board with Uncle Sam, the husband is worried that harboring fugitives is going to get them killed and put their daughter – still a slave in one of the Detroit work camps – in more danger. Putting a black family in the center of this battle makes sense in the context of this series , and the hideout results in some funny scenes like the family dividing up their limited food to the heroes – and giving the tiny Doll Woman a single bean for food, which is more than filling enough for her.

Unfortunately, the second half of the issue blows this slight positive momentum and continues the series’ tendency towards tone-deaf politics. Out of concern for his family, the black man betrays the heroes to the Plasstic men and the house is invaded by the vicious stretchy Nazi monsters.

Sure enough, he and his wife are shot to reward them for their “help” and they bleed out next to each other, the wife giving some inspiring words before dying and the husband begging the Freedom Fighters to help his daughter before expiring. Bruno Redondo, replacing Eddy Barrows on this series, does a fine job with the art – his action scenes are crisp and dynamic, and the monsters are suitably creepy. The bigger issue is that this series is still essentially a blank slate character wise. There’s no one here to get invested in yet and while the Nazis are vile, they’re also so one-note to provoke no real reaction. 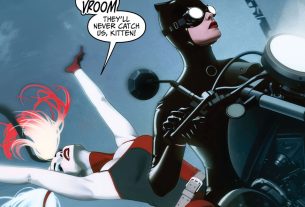