Ray: Every issue of Wonder Twins is a surprise, and some of them work a lot better than others. Mark Russell has taken some of the diciest issues of the modern day and put them in a surrealist blender to turn a superhero mirror on the real world, but the broad satire tone doesn’t work nearly as well on issues as grim as the ones Wonder Twins #5 grapples with. The ongoing subplot of Polly Math and her reluctant criminal father Filo has been building since the second issue, and Polly’s been one of the most entertaining characters in the series. The Scrambler, the closest thing this series has to a big bad, has been trying to get Filo back into the Legion of Annoyance to pull off a big scam, but after being pressured by Polly Filo finally agrees to hang up the villain game for good. This is right before Zan and Jayna decide to shut down the Legion for good, kicking off a series of events that take the issue in a seriously dark direction.

Scrambler is a more interesting villain than most in Wonder Twins #5, as his power is actually quite spectacular and the depictions of his past magic acts are rather creepy. Far less compelling is the villain who feels like a parody of Suburban housewives who ask to speak to the manager, and her role in the series seems to be to set Filo up for a tragic end that kicks off a very awkward Black Lives Matter storyline. There’s a real story to be told here about how black men who are killed for doing nothing are tried in the media, leading to their killers being acquitted, but the execution here is lacking and seems more like a parody than a satire. It also seems to be a thinly veiled way to turn Polly into a villain in only an issue, and her team-up with Scrambler sets up a huge new plot that will be very hard to resolve in only an issue. Is this an intriguing and ambitious comic? Yes, but maybe too much of one.

Corrina: I’m not sure anyone is a true villain in this series. Zan and Jayna are certainly a little too clueless overall to be real heroes, though, obviously, they do some good and have good intentions. But Polly Math has definitely been the most compelling character through these five issues and, damn, it was heartwrenching when her father vanishes, perhaps dead. Her grief is real.

That real grief has an uneasy balance with the surreal aspect of the rest of the issue. Though I can’t stop laughing at Zan’s continued defeat of the toxic masculinity boy (okay, he’s definitely a villain), and the casual way people use technology that they don’t understand.

Still, with Filo not dead but in the Phantom Zone, there’s a setup to get even further away from reality as either the Phantom Zone people will be released into our world or Zan and Jayna will travel into theirs. Overall, the series has been a pleasant surprise, despite my grumbling about the tonal shifts. 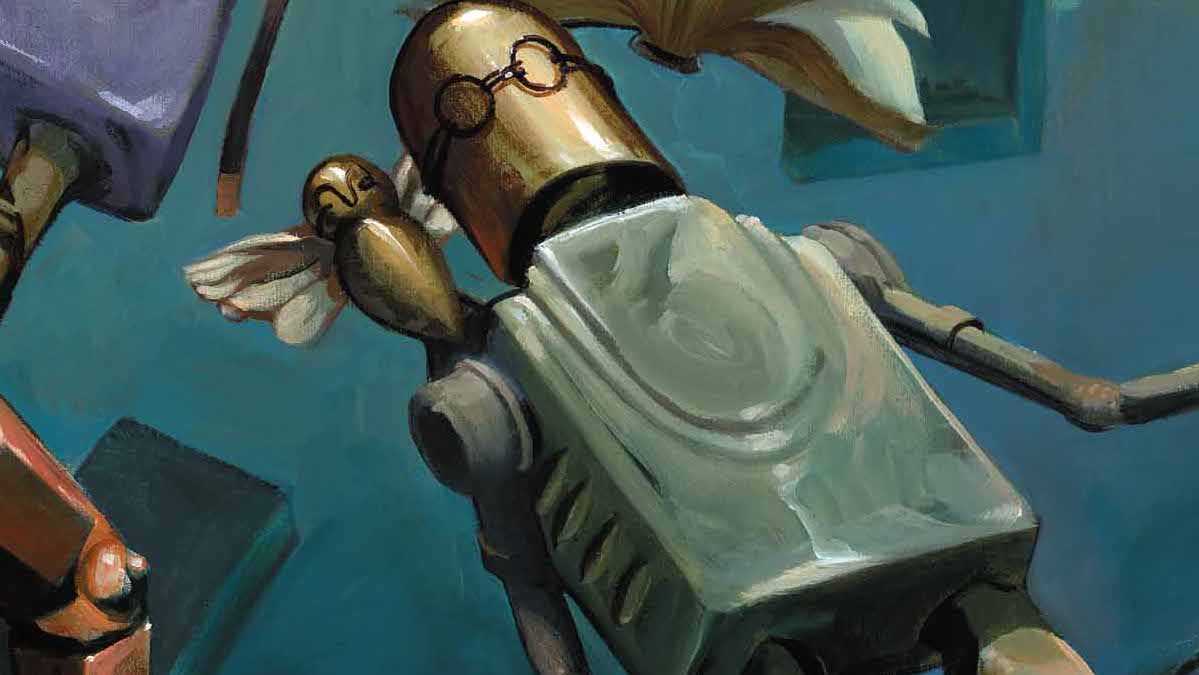 Review – The Books of Magic #4: Chaos in the Library