Corrina: Order Does Not Equal Good

Ray: James Tynion IV’s Justice League Dark continues to be one of the best books in DC’s stable, packing every issue with enough action and suspense for an event comic. When we last left off, former Doctor Fate Khalid Nassour was rescued from the cursed vase by Kirk Langstrom, giving us our first look at how Doctor Fate became the biggest threat to the world of magic. The tug of war between Kent Nelson and Nabu was only hinted at before, but there’s always been a sinister edge to the ancient Lord of Order. After the creepy opening segment set in the Tower of Fate, we cut to Myrra – which has just been invaded by the Lords of Order. Nabu’s new alliance of magic warriors each bear an enchanted object – and just like Doctor Fate, they each have taken over the minds of a DC magical hero. Madame Xanadu, Mark Merlin, Ibis, and Extrano have all been claimed, and they’re ready to lay waste to the kingdom Bobo was sworn to protect.

This entire series has been one big mega-arc, with The Witching Hour mini-event being one of the highlights. That’s why I was especially pleased to see Circe show up here again. While this series has been very heavy on the traditional magic characters of the DCU so far, Wonder Woman’s presence has been very significant and it seems her former arch-nemesis will be key to the hunt for Mordru. This dark sorcerer and lord of chaos may be the only one who can stop the new Lords of Order – who show their power this issue by ripping Etrigan from Jason Blood and seemingly condemning the latter to rapid aging and death. Last week’s issue of Doomsday Clock finally got to show off Doctor Manhattan’s power, and it’s rare for a villain to genuinely surprise with something like that. This issue was another example, firmly establishing the threat level of Fate’s new team and upping the stakes once again. This series is never sitting still for a second, always ready to surprise. It’s never anything less than excellent.

Corrina: Damn, Bobo cannot catch a break. He finally learns how to use the sword and it seems like his whole kingdom is going down, anyway. The same could be said for the whole JLD. They’re trying to stop one major magic disaster after another but nothing they do quite seems to work. (Note: why is everyone blaming Wonder Woman when Hecate caused a lot of the problems on her own? I doubt the Lords of Order would have liked her around much.)

And, yes, the Lords of Order have always been, well, kinda not-so-good. So much so that I now wish for a cover with Khalid yelling “Nabu is a jerk!”

They make for good villains, however. Are Nabu’s fellow Lords new creations? I’m familiar with most of the magic DCU but I didn’t recognize them. If so, bravo on the creative team because they’re all fascinating embodiments of their respective totems. (But very bad news for JLD.)

And, yes, this is one of DC’s best books. 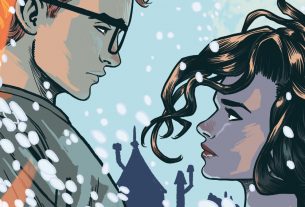