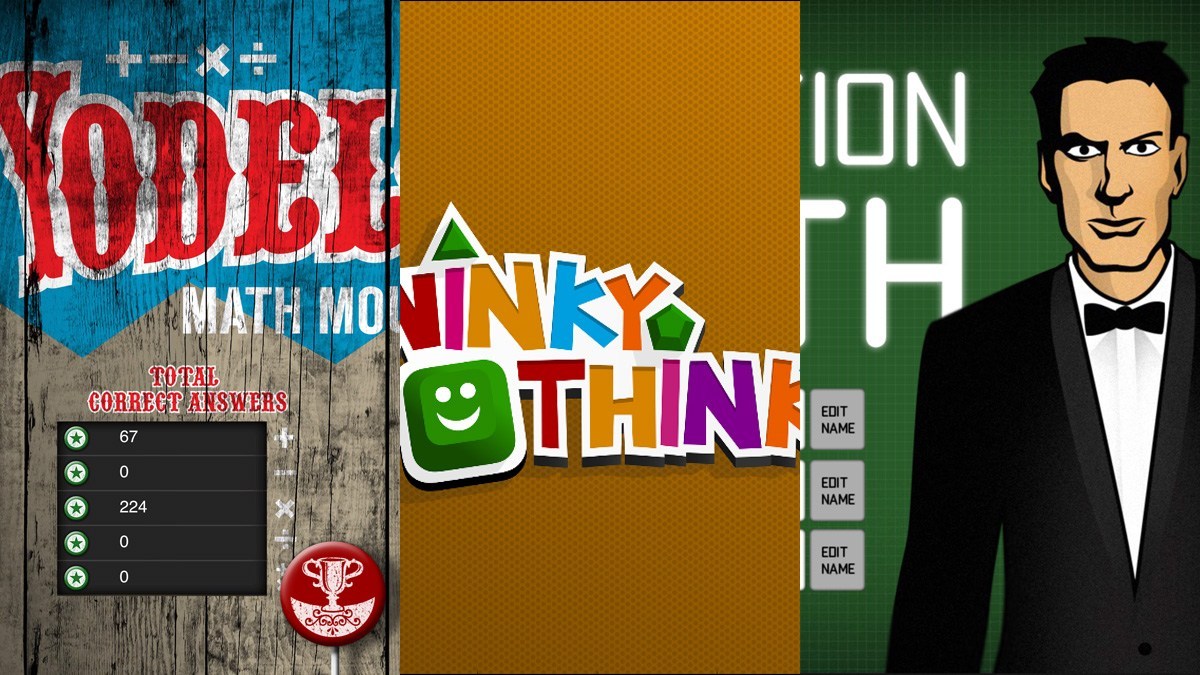 Recently taken over by Little 10 Robot—one of my favorite app companies—Spinlight creates educational apps that kids and parents will both enjoy. My nine-year-old son and I have spent the last few months playing with three more apps from Spinlight: Winky Think Logic Puzzles, Operation Math, and YodelOh Math Mountain, after falling in love with Geography Drive USA which I recently reviewed.

The first Spinlight app we looked at was Operation Math, a math app designed to have the feel of a James Bond-style spy adventure. In Operation Math you play as Agent Prime, working against Dr. Odd who is building “a global network of computers to eliminate the world’s even numbers.” Why? I have no idea, no reason is ever given, but my son hasn’t questioned the mission as yet!

After selecting to take on a new mission, you choose which operation (or operations) you wish to work with. There are seven choices: Addition, Subtraction, Multiplication, and Division, singularly; Addition & Subtraction and Multiplication & Division; and all four together. Once you have made a decision, you will be presented with a list of missions. In the beginning, most will be locked but moving through them unlocks additional missions quickly.

A mission consists of solving math problems on your watch as quickly as possible while a timer counts down. Each correct answer unlocks a security door; you’ll start off with just five doors to unlock in 60 seconds, but by level five you’re up to 23! Successfully completing missions unlocks new clothing options and new watch designs.

Away from the missions, you can head over to Training which allows you to practice all the operations in a less stressful environment without a timer. In Training, you can work to set a personal best (your highest score without making a mistake) and select among three levels of difficulty. Going into Records, you can view how many times you have completed each mission successfully.

While Operation Math is a fun concept, I’m not entirely sure it’s one that kids will fully go for as not too many youngsters I know watch spy thrillers to really “get” what’s going on with much of the app. I also found it highly disappointing that the game was set to a male character (who looks uncannily like Nicholas Cage) with no option to switch to a female spy.

Winky Think Logic Puzzles ended up being one of my favorites from the three Spinlight apps we tested. Made up of 180 puzzles split across three levels, the game mixes mental puzzles with some physical dexterity as you work your way through challenges that become progressively harder.

Each puzzle is based on the same premise: get the colored shapes into the marked spots on the screen. To begin, this is as simple as dragging them across, but soon you will be using buttons to change colors and move items around, faced with bars that reset the puzzle if you touch them, and chunks of ice that block your path.

Many puzzles require you to hold multiple elasticated shapes on their spots at once. Taking your finger off the screen at any point causes the shape to snap back to its original location, which means some creative finger gymnastics are often required – this is not a game for those suffering from arthritis or anyone with a condition that affects their fine motor skills. For this reason, Winky Think Logic Puzzles may not be the best choice of puzzle app for older people looking for something to keep their brain engaged.

My biggest criticism of Winky Think Logic Puzzles was that the learning curve was far too slow. It took several dozen puzzles before anything even remotely challenging came up, both for myself and for my nine-year-old son, and, with no option to skip ahead to a higher level, you’re forced to work through all these simple puzzles before reaching something more interesting. There have been one or two difficult challenges, but the vast majority have required more patience than brain power, even at the highest level.

Once you have completed the final puzzle, you get a gold trophy and some confetti but nothing else happens. You can return to any of the puzzles at any time, giving the app some replay value but there was nothing to encourage this; it would have been great to see the option of a timer built in so you could challenge yourself to beat the puzzles in a shorter time.

All in all, this is a fun app (enough so that I completed all 180 levels) but I would have loved to see it become a bit more challenging, and my son would agree.

The final Spinlight app we tested is YodelOh Math Mountain, a math app with a slightly bizarre alpine carnival game theme. In YodelOh, players must “tap the correct targets to score as many points as you can before Hans falls off the cliff.” That’s right, this man’s cartoon life depends entirely upon your math skills. So, no pressure…

There are no profiles here, just a high scores board, so upon opening the app you’ll go straight into the game, selecting from five different games: Addition, Subtraction, Multiplication, Division, or All Four.

While all this is going on, a regular stream of rams is heading up the mountain. If they reach Hans before you tap on them, they’ll push him two steps further up the mountain, but tapping on them gives you a 25 point bonus, so you’ll need to try to hit them without delaying your answering. This actually gets easier the further up the mountain Hans gets. Additionally, if you’re able to answer a string of questions correctly, you’ll earn a bonus sign which you can tap to make Hans take a step back.

YodelOh is an old fashioned type of game as you cannot “win” it; you can only keep going as long as possible to try to earn the highest score. As the game progresses, other symbols begin popping up but you want to avoid tapping on some as they will work against you, making the game harder and harder until Hans inevitably reaches the top of the mountain and falls off the edge.

There is an ongoing competitive element to YodelOh Math Mountain thanks to every player competing together to be top of the leader board, and the game is definitely fun with a midway/carnival type vibe, but, as with Operation Math, I find myself wondering about the appeal of the theme. Oh, and if the video above didn’t clue you in, the music in this game will drive you to want to jump off of Hans’ cliff yourself after a few minutes of play!

Click through to read all of “Spinlight: 3 Apps to Help With Math and Logic Skills” at GeekMom.If you value content from GeekMom, please support us via Patreon or use this link to shop at Amazon. Thanks!

2 New Apps From PBS Kids Add Up to Arithmetic Adventure