Corrina: How Harley Sees Herself

Ray: Sam Humphries continues to raise the bar on his Harley Quinn to run, with an arc that confronts Harley’s criminal past and has her take a major step towards heroism – by teaming up with the man who used to put her behind bars, Batman. The last issue saw Harley become suspect #1 in the murder of a Doctor in Gotham, and she barely convinced Batman to give her twenty-four hours to prove her innocence. After an amusing segment of Harley causing chaos in the Batcave, she tricks Batman by handcuffing them to each other, making him take her along on his investigations. This is exactly the kind of absurd plotline Humphries excels at – it’s classic Harley antics – but he’s also been doing some great work with Harley’s character over this arc. The climax of the first half of the issue involves Harley risking herself – and Batman – to protect a woman from an abusive stalker, and it’s one of the best moments of the series. Harley may be screwed up, but she has a much stronger moral core than most antiheroes.

The reveal of the person who framed Harley could have been an anticlimax, but Humphries set this up very nicely a few arcs ago – a former villain/target of Harley’s became a stalker. But this issue really isn’t about that guy, and he’s portrayed as the nuisance/minor threat he is. This issue is largely about Harley proving to Batman that she’s changed – and in the larger sense, proving to herself that she’s genuinely past her villain years and Joker by proxy. The ending featuring the return of Harley’s cosmic taskmaster moves the plot forward, but all the McGuffins just serve to push Harley’s story forward. The characterization of Harley here is a huge improvement over what we see in Heroes in Crisis – both seem to emphasize her moving past her trauma, but this one gives her the initiative she needs to move forward on her own rather than focusing on her trauma.

Corrina: Harley Quinn #58 almost reads like an episode of Batman: The Animated Series and I mean that as a high compliment. It’s fun, the quips are great, Batman’s reactions are great, and Harley’s insistence that she doesn’t kill people now-well, except for ones who don’t stay dead–are hilarious.

And there’s a deeper level to this, as (and I almost forgot this!) this was in Harley’s head, as part of Harley’s trials, which seem to be about how she sees herself and who she wants to become. It’s also is a clever way for Humphries to basically use any character he wants, in whatever plot that he wants, because it’s all imaginary. The stakes of Harley failing the trial are very real, however. So we’re rooting for her. 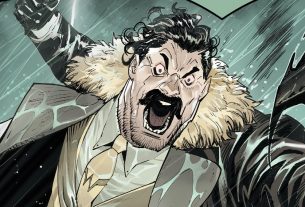