Ray: Scott Snyder seems to have a lot of co-writers on this title, with James Tynion IV jumping on board the “Escape from Hawkworld” arc and Jorge Jimenez cowriting an upcoming event. It hasn’t hurt the book’s momentum at all, as the current arc continues to be highly exciting with Justice League #15. When we last left off, Starman’s powers were raging out of control, and as the issue kicks off, the surge of energy threatens to destroy the Hall of Justice. But while Superman, Batman, and Wonder Woman deal with that pressing threat, Hawkgirl and Martian Manhunter are in even greater peril. On the mysterious Thanagar Prime, the evil Empress Shayera has unleashed her lover – the Savage Hawkman – to capture the visiting Leaguers. The truth behind these two Hawks’ existence has yet to be fully explained, but it seems clear that Snyder is attempting to give Hawkgirl her own mythology, separate from Hawkman and his new origin.

After escaping from the evil Hawks’ clutches, Kendra, J’onn, and John Stewart proceed to their next destination – the treasure vault of Thanagar Prime. The concept of this planet that shifts in time and space is fascinating, and it’s made it a perfect location for outlaws all over the universe to stash their most treasured goods. The setup of the vault, with countless deathtraps, almost feels a bit over the top at times, but it works well as an elaborate heist thriller. Cheung and Segovia do a great job of capturing the sweeping feel of the planet and the dangers inside it, and the stakes are high throughout. By the time the Green Lantern Corps show up to arrest the Leaguers, it’s clear this is a much more twisted tale than was expected. There’s a good stinger as it’s revealed that Starman knows much more about the Totality than previously expected. This title does exactly what a Justice League title should – get me excited to come back in two weeks.

Corrina: Okay, first a bow to Snyder & company for using such a deep cut as the Roger Stern/Tom Lyle Starman. I’ve been meaning to say that since he first appeared and keep forgetting or, well, I was waiting to see if he’d come out of his coma. Now he has. I love this unexpected use of DC lore.

What made this issue for me is that all the Leaguers were acting smart. The group on Thanagar were able to escape due to J’Onn being sneaky, and Kendra and John puzzling out what might actually be happening. It seems like this Thanagar can use Source Wall energy to maybe create a small pocket of reality. Maybe? Which makes me wonder if this is the real Green Lantern Corps at the end.

Back on Earth, Batman is given some snark–Snyder and Tynion do write a snarky Batman–and while I’m still on the fence about whether the Totality concept is enough to hold this series together, it has led to some good moments, and may eventually pay off. 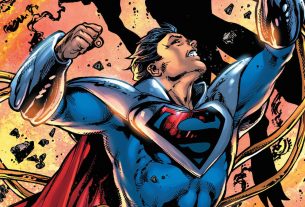