Ray: A new Suicide Squad miniseries that focuses on the magical side of the property, this is essentially a combination of two completely different miniseries into one oversized package. It’s also, surprisingly, one of the most interesting Suicide Squad stories I’ve read in a while.

The first story, by veteran DC writer Mike Barr, continues his Katana miniseries from the previous Suicide Squad anthology. Back from her defeat of Kobra, Katana is back in action with the Squad and is mopping up the remnants of the evil organization. The first half of the story is an action-packed infiltration of Kobra’s base culminating in the decapitation of the villain. But the interesting part of the story comes in the second half, as Katana returns home to her teenage ward Halo and tries to help the girl fit into her new life. But this slice of normalcy – reminiscent of the relationship Power Girl had with Atlee in that classic Palmiotti/Conner series – doesn’t last, as soon Katana finds herself sucked into her own sword and face to face with her dead husband. This is probably the first time in a while I’ve found Katana fully compelling.

The second story, written by Jai Nitz, focuses on El Diablo. It’s interesting that Nitz has been the consistent writer on the character for close to ten years. The character’s never quite caught on as a major player, but he’s survived a lot longer than many legacy heroes and it’s probably due to a cohesive vision from his co-creator. This time, he’s found a new calling in Suicide Squad – heading up a new Black Squad of magical villains taking on the most bizarre cases. When we pick up, he’s with a new crew of antiheroes including a gargoyle woman and Doctor Thaumaturge, a new non-binary hero (and renamed version of Doctor Eternity, which is likely why this series was delayed for so long). Amanda Waller wants a better understanding of magic, so she brings in Klarion as a consultant. Although one member of the Black Squad dies this issue, more due to his own cowardice than anything, this is the rare Suicide Squad story that feels like it’s more about growing its corner of the DCU than anything. Both of the stories in this book feel like they’re doing something new with the Squad, and that in itself is worth a recommendation.

Corrina: These two stories feel like part of a much larger whole, perhaps something DC has had on the shelf for a while. That gives it an odd pacing, especially with the second story.

And, yet, these two tales, as disjointed as they sometimes read, are the best Suicide Squad stories in a long time, better than the whole of the regular Suicide Squad comic since the new 52.

Katana’s tale is more revealing personally than even in Barr’s story in the previous anthology. It gives her a home life, a new version of Halo (who readers of the classic Outsiders will recognize), and it even allows her to talk to her late husband. The twist of Katana losing control of her body promises to bring Halo into the action in the next installment, as surely she’s going to notice something wrong with her guardian.

The second, magical tale, throws a brand new squad at the readers but, to be honest, I expected them all to die and fast, so I didn’t pay much attention to them. But the use of El Diablo, Klarion, and young Faust all works, and Waller is less…overtly evil…than she’s been in the regular comic. I find myself interested in El Diablo’s choice.

But I have one question: how the heck did Waller put a brain bomb in a ghost? Or did she convince him some other way and I missed it? Similarly, how would Faust ever convince Gentleman Ghost to come to his side, given he’s, well, incorporeal? 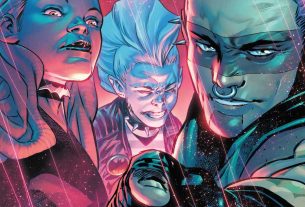