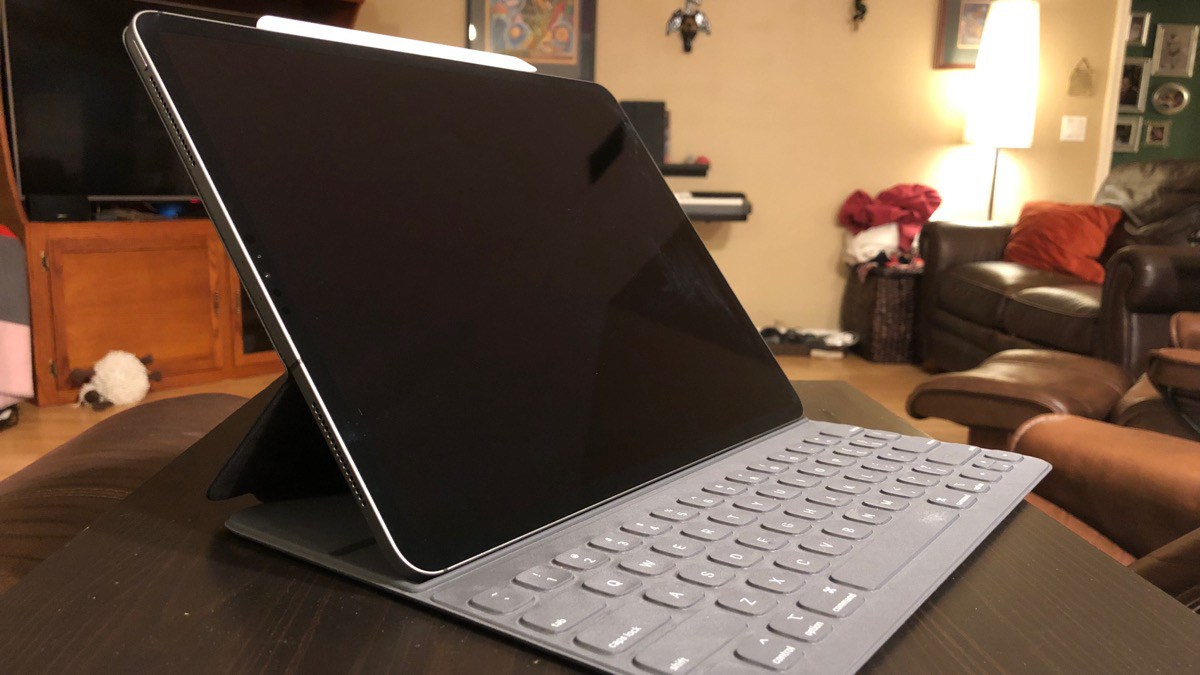 I travel a lot, so I needed a computing device that had a large enough screen to get the most use out of the multitasking features of iOS and the connectivity of cellular, so I opted for the 12.9” 256 GB Cellular version in Space Gray (which in this configuration was $1299). I use my iPad Pro to do a ton of writing (for this blog, my personal blog, journaling, and for professional papers associated with my day job), so there was no question that I would need a keyboard. Previous to this purchase, I was using the Apple Smart Keyboard on my 1st Generation 12.9” iPad Pro, so I opted to stick with Apple’s Smart Keyboard for this new iPad Pro as well (which was $199). A new Apple Pencil was a must for me as well (which only works with the new iPads retails for $129). This past week alone I have almost worn the thing out signing papers associated with buying a new house, but my normal use case is annotating sheet music when I am out playing keyboards and piano in public. And last but not least, I purchase Apple Care on all my major Apple computing devices, so for this iPad Pro that was another $129. In total before tax, my total bill for my new 12.9” iPad Pro setup was $1756.

For months I have been anticipating Apple’s release of new iPad Pros, and with my 1st generation 12.9” iPad Pro being almost 3 years old now, I was ready to update. Up until the day Apple made the announcement, I was convinced I was going to go with the smaller iPad Pro. I do a lot of traveling and the large form factor of that 1st and 2nd generation 12.9” iPad Pro was just a bit too unwieldy to comfortably use on an airplane. It essentially takes up the entire seat back tray. But then when Apple announced that they were reducing the overall size of the new 12.9” iPad Pro while maintaining the 12.9” screen size, it made me re-think my decision. I use my iPad Pro a lot as a sheet music reader, and the larger 12.9” screen makes reading sheet music so much easier. I also really like to have two apps open side by side on that large screen when doing research for my various writing tasks. Apple even said specifically in their product keynote that they think the new smaller form factor of the 12.9” iPad Pro will allow more users to opt for and take advantage of the larger screen size. So I did. Below is an image of a comparison I did at home before I made my decision on which iPad Pro size to purchase.

I’ve been living with FaceID for over a year now with my iPhone X and I like it. It does the job, and most of the time it works the first time. Most of the time. I would say about one out of every twenty times I try to unlock the iPhone, FaceID will fail and ask me for my passcode. So I was a little concerned when the new iPad Pro was going to FaceID. I use the iPad in my lap quite a bit, and I wasn’t sure that FaceID would work as consistently from that position. Turns out I had nothing to worry about. Apple had to make some adjustments to FaceID to allow it to work in various orientations on the iPad anyway and whatever they did it seems to work really well. In my first week with the iPad, FaceID has NEVER failed when opening it from my lap and it has maybe failed once or twice while holding it in my hand (but only because I was covering the sensor with my hand). In the event that you cover the sensor, the user interface adds an arrow to the screen to tell you where the sensor is so you can adjust your grip and try again. So far I have not had FaceID fail to recognize my face (except for the covering up of the sensor bit I just explained).

So overall, I find FaceID on the new iPad Pro even better than it was on my iPhone X (and it works pretty darn good with my iPhone). With the iPad Pro, you have the additional benefit now of being able to just touch the screen to wake the iPad from sleep. So if you are using a Bluetooth keyboard, all you have to do is hit any key on the keyboard once to wake the iPad from sleep and FaceID will automatically unlock the iPad. Click any key on the keyboard one more time and the lock screen is dismissed and you are using your iPad. This is a really nice new feature that allows you to get in and out of your iPad much faster than having to hunt around for the home button or power button to wake the iPad from sleep.

The new Smart Keyboard also sports two different viewing angles for your iPad (whereas the old Smart Keyboard just gave you a single viewing angle). The real change here is that the additional viewing angle is more laptop-like (near 90 degrees). I find the more angled position more comfortable when using on my lap and the steeper angle (which is closer to 90 degrees) better when using on a desk or table. The additional viewing position also helps if you are trying to get rid of glare (sometimes a slightly different angle is all you need).

Just as with the old Smart Keyboard design, the keys on the keyboard are only active when the iPad is completely engaged with the case (in one of the two groves). This is handy when you just open up the folio case and fold the keyboard back behind the iPad so you can use the iPad like an iPad and the on-screen keyboard will pop up. So far I like this new Smart Keyboard design a lot better. It is more stable when using on your lap, it offers better protection for your iPad and when folded down into case mode, and it is a lot slimmer and more case-like than the old origami style the case used to have. The only thing that takes a little getting used to is that the magnets that hold the case and the iPad in the proper orientation are stronger than with the old case and iPad, so it takes a little more effort to disengage the iPad from the typing mode and close the case. Overall, I see this new Smart Keyboard design as a significant improvement over the previous design. The keys feel the same, though, so no change there. (I know people either really like or can’t stand the feel of Smart Keyboard keys… I like it.)

I’m probably not the best person to be talking about the new Apple Pencil, as my use for it is pretty basic. I’m not an artist and I don’t do a lot of handwriting with it. I use it for two main tasks, annotating sheet music and signing documents. So for me, the biggest change with the new Apple Pencil is that it can be stored (with the help of magnets built into the iPad) right on the side of the iPad and it charges while connected. I find this extremely convenient, as with the old design, I would always go to use the Pencil only to find it wasn’t charged. I have a padded bag, and the magnets that hold the Pencil to the side of the iPad are strong enough to keep the Pencil secured to the iPad even when taking it in and out of my bag. But depending on your case/bag design, you may not be able to leave the Apple Pencil secured to the iPad Pro when storing it in a case/bag (the magnets are strong but the Pencil can still come loose).

I like the matte finish of the new Apple Pencil, as it gives the Pencil a little more texture and grip, and the addition of a touch-sensitive surface that when tapped allows you to quickly change between drawing modes (from draw to erase or to a different brush type for example). If you are someone who uses the Apple Pencil to draw day in and day out, I can see where this fast switch feature could be a game changer. As someone who just occasionally uses the Apple Pencil, these upgrades are just that… upgrades.

Is It Worth the Price?

This really is a loaded question. Obviously, for me, I thought it was worth the price because I bought the new iPad. It is a daily use computer for me, and I more than get my money’s worth out of the device. Another way I looked at the purchase is that my 3-year-old, 1st generation 12.9” iPad Pro is still worth about $500. Considering the cost of my 1st generation iPad Pro was about $1200, 3-years of use cost me about $700. That comes out to about $20 a month or $0.64 a day. The other aspect to consider when you ask yourself this question is how you will use this iPad. Not only do I use my iPad Pro as my main daily home computer, but I also use it as an iPad (reading and watching movies and TV Shows). I would not pay what I paid for this device if I was just using it as an entertainment device. That is how my wife uses her iPad, and she just got rid of her iPad 4 (vintage 2012) and bought the 9.7” iPad. My daughter also bought for herself the 9.7” iPad and uses it for watching videos and for drawing (she has done quite a bit of artwork for my articles and reviews over the past couple of years).

So, obviously, the new iPad Pros are not the only iPads out there if you are in the market for a new iPad. It used to be that the being able to use an Apple Pencil was a distinguishing feature of an iPad Pro, but now you can do that with the 9.7” iPad for a lot less money. For me, I continue to go with the iPad Pro because of the Smart Keyboard and the large screen size. I don’t even need the processing power of the iPad Pro, but I know a lot of people do (so that is something to consider as well). The other thing to keep in mind is the added cost of the new Apple Pencil and Smart Keyboard. If you are upgrading from an older iPad Pro, then the Apple Pencil and Smart Keyboard you may have now won’t work with the new iPad Pros, and they are more expensive than they used to be (so that is quite a kick to the wallet). Bottom line, only you can decide if these new iPad Pros are the right device for you. Hopefully, my impressions of the new iPad Pro help you ask yourself the right questions if you are considering buying one.