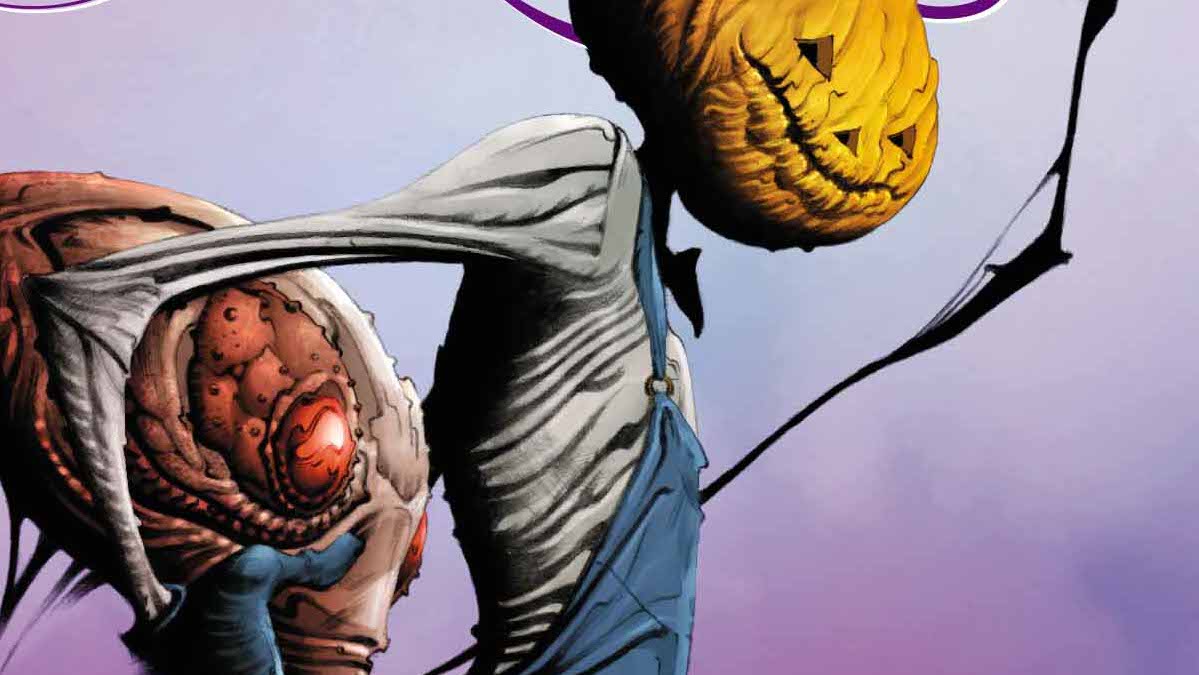 Ray: The Sandman Universe continues to unfold. The Dreaming #2 just as fascinating as the first issue. As the debut issue set up, the world of the Dreaming is unraveling, and this issue makes clear how bad it’s getting. In his new role as administrator of the Dreaming, Lucien at first seemed like a benevolent figure, but this issue isn’t from his perspective. It’s from the perspective of wildcard Merv Pumpkinhead – who quickly feels himself becoming irrelevant by Lucien’s new efficiency-focused approach. There’s a distinct political overtone here – Merv has always been a bit of a bigot, and he’s overly concerned with new foreigners coming in and taking their jobs. It’s a surreal touch to a real-world issue, but Spurrier and Evely manage to fuse that with some legit disturbing horror as the story unfolds. Merv is also deteriorating, his pumpkin slowly rotting from a wound – another indication of how the Dreaming is slowly deteriorating. With no answers as to where Dream has gone, Merv goes on walkabout.

Merv’s journey takes him to an encounter with Dora, the mysterious visitor to the Dreaming who Merv sees as the core of everything wrong with the place. His attempt to confront her doesn’t go well for him, but it does push him further into his story – leading to him encountering Cain and Abel, Matthew the Raven, and the mysterious and powerful Eve. The latter seems to have the most answers, but I’m not sure if she’s fully sharing them yet. Everyone has a piece of the answers, but no one has the truth of Dream’s whereabouts. When Lucien takes a dramatic step that strips Merv of something beloved to him, it pushes the pumpkin man to an extreme measure – resurrecting an obscure but feared classic Vertigo villain to bring order back to the Dreaming. This series pulls off a very delicate balancing act – perfectly fusing the dense, traditional storytelling style of the best classic Vertigo books with a more reader-friendly crossover style.

It even drops the House of Whispers in for a visit, teasing that also excellent book. This is how you sell a new line to readers.

Corrina: One of the time-honored ways to introduce readers to a complex and confusing world is to use a “normal” narrator. Normal, in the case of the Dreaming, is a broad term, and Merv Pumpkinhead is elected. Yes, he truly is a pumpkinhead, given life? by Dream himself.

Merv is full of complaints, mostly about the way things are right now, which clearly need fixing. Merv knows the Dreaming is coming apart but he’s not smart enough to put together why, nor is he powerful enough to do it himself, and, in the end, we find out who he’s been calling for help.

As Ray said, this is a dense book. It is surreal and, at times, confusing. It’s not my thing, as a reader.

1 thought on “Review – “The Dreaming #2”: The Trials of Merv Pumpkinhead”