Ray: The best of this week’s Hanna-Barbera crossovers, Nightwing/Magilla Gorilla Special #1 is an absurdist Hollywood satire with just the right amount of nonsense and good characterization from both its leads. It actually has a decent bit of emotion too – more than you’d expect from a comic about a talking movie star gorilla. The issue opens with Nightwing – who is charming Dick Grayson, not edgy Ric Grayson, reason enough to pick up this comic – heading to Hollywood to meet with Magilla and his agent Mel. The aging superstar ape wants to make a Flying Graysons biopic, intending to play John Grayson. It’s just a thing in this universe that apes play humans in the movies on occasion, I guess. Dick is skeptical, and the visit brings up a lot of painful memories for him. When he initially denies to license the rights, Magilla becomes enraged and argues with Mel – only for Mel to turn up dead later that night, the victim of a vicious ape beating. Soon, Nightwing winds up pulled into Magilla’s determination to prove his innocence, even if he has his doubts.

The best thing about this issue is that it’s essentially a played-straight Hollywood noir with talking apes. As Magilla and Nightwing go on the run from the police, Magilla’s past comes out – Mel was essentially his surrogate father, adopting him and his sister as babies. Magilla became a star, but his sister found the bad side of Hollywood and became a junkie with a sleazy boyfriend. Then there’s Magilla’s rival and former protege, Grape Ape (who also makes a brief cameo in Deathstroke/Yogi Bear this week). Most of these roles could be played by humans, and then it would be a genuinely tragic story of Hollywood’s power to corrupt. But they’re apes, so this comic has just the right absurd edge. The twisty ending satisfies, and the comic actually does some great work with Nightwing coming to terms with the legacy his father left him. Heath Corson also wrote the Bizarro miniseries a few years ago, and he’s great at fusing the absurd and genuine. The Secret Squirrel backup continues the fast-paced adventure, as a triple-agent is revealed and the major threat to the world escalates. Fun and silly, but unlike the main story, largely forgettable.

Corrina: Aw, this comic made me nostalgic for Dick Grayson, not that dude over in Nightwing‘s current comic.

But, once that’s done, what’s on the page is an enjoyable mystery with some strong personal scenes for Dick Grayson, especially about his relationship with his parents. That dovetails nicely thematically with Magilla’s relationship with his family: his human father, his addicted sister, and his “son,” Grape Ape. (Who says more than “Grape Ape” here.)  (Magilla’s sister also has a gorilla boyfriend, so quite a community of gorillas in this Hollywood.)

I’m not so sure Dick would agree to let a film be made of the Flying Graysons but, hey, I’ll go with that as the ending. 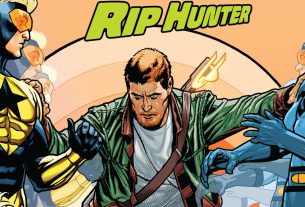 Review – Blue and Gold #5: Return of the Time Master 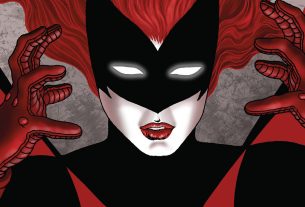