Ray: Steve Orlando’s brief run on Wonder Woman has covered a lot of ground in only five issues, dealing with a very personal story involving Diana’s friendship with a supervillain, a gonzo sci-fi adventure in an Aztec pyramid, and now a political thriller set in Bana-Mighdall as the battle for independence pits Diana against her sister Artemis in Wonder Woman #55. The ruthless queen of Bana-Mighdall, Faruka II, has aligned herself with Suicide Squad supervillain Rustam in an attempt to force independence, and they’re massing on the borders of neighboring Qurac. Artemis has sided with her fellow Bana-Mighdall, but Orlando thankfully dispatches with that cliched subplot following a conversation between the two Amazons in the mental space created by the Golden Perfect. This allows Artemis to see the truth about the conflict she’s been pulled into and align with Diana as they return to the battlefield – and try to stop Rustam from plunging the entire region into open war. Which is good timing, because Rustam is about to make his move.

Rustam was the one original villain created in Justice League vs. Suicide Squad, and he suffered from having most of his character development happen in the Suicide Squad title. He’s an interesting idea – a Quraci rebel who has been betrayed by his own government and the US government that employed him – but unfortunately, he mainly comes off as an ultraviolent cliche with a giant flaming sword. His sword almost seems to function like Rogol Zaar’s ax at points, displaying new powers based on what the story needs him to do.

But Orlando’s got a good theme of non-violence running through this issue, and while Rustam’s turn in the Golden Perfect isn’t nearly as smooth as Artemis’ was, it’s still a good way to show him the error of his ways. The resolution is far from seamless – one of the villains gets to maintain their powers, but with a compromise – but this is a good capper to Diana and Artemis’ story arc. The issue is that Artemis’ storyarc is no longer going to be in Orlando’s hands – and actually is up in the air entirely given recent events. That feels like a missed opportunity in an otherwise strong arc. Next, up for Diana – a crossover with Justice League Dark followed by G. Willow Wilson’s run.

Corrina: It’s about time Artemis had a good story focused Yes, we saw her in Secret Six a few years ago, and she was featured in Red Hood and the Outlaws recently, in a story that reintroduced Bana-Migdall, but that story was hardly what I’d call good.

This, however, has been excellent.

I was worried about the cliffhanger with last week, focusing on Wonder Woman and Artemis as enemies, but I should have trusted Orlando. The Golden Perfect is used effectively, as it always should be, to show people the truth about themselves. For some, like Artemis, it’s her reluctant acceptance of a truth. For others, like Rustam, it’s about forcing him to take the responsibility for his own actions, rather than blaming others.

Diana is terrific, walking the line between saving people and letting them save themselves. Whether the Bana-Mighdall Amazons will eventually find the hope and home they need without losing themselves to the darkness is unclear but there’s only so much Diana can do to change hearts.

It’s enough that she makes Artemis see her own.

Review – Deathstroke #49: Of Fathers and Sons 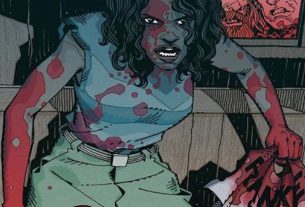