Ray: Apparently what Rob Williams’ Suicide Squad needed to level up was a crossover with Aquaman? Suicide Squad #45 picks up in the immediate aftermath of the last issue of Aquaman, which saw Aquaman accidentally raise Atlantis from the deep via magic in the aftermath of Dark Nights: Metal. Now, as Mera’s coronation approaches, powerful interests on the surface plot to sink Atlantis back down to the depths – especially after, in the opening segments, the rising of Atlantis causes a massive tidal wave that is seen by many as another attack on the surface world by the mysterious kingdom. While Mera prepares for her coronation with Mother Cetea and Aquaman and Vulko plot how best to protect Atlantis from the Ninth Tride, a military radical named Admiral Meddinghouse defies his orders from the President and cuts a back-channel deal with Amanda Waller to send in the Squad and take action against Atlantis. And naturally, she goes to her Suicide Squad to head down to the depths for what could be their most dangerous mission yet.

The Squad is down a few members between Enchantress’ death, Katana’s refusal to participate in action against her fellow heroes, and Boomerang being an idiot. Waller has recruited two new members, and Williams and Abnett are doing some nice cuts from DC history here. Old Superman villain Master Jailer is on the mission to seek redemption and get early release from prison, while the mysterious and powerful Lord Satanis is a Wolfman creation and a refugee from another dimension. Although at first his pretentious ranting comes off as comic relief, as the issue goes on it becomes clear there’s more to the character. I’m hoping he survives this arc so we can find out more…but he probably won’t. Their infiltration into Atlantis is aided by Urcell, a traditionalist warrior who doesn’t consider Mera to be a legitimate queen. There were also some unexpected consequences to Arthur’s move to raise Atlantis. However, the end of the issue shows just how far Waller is willing to go against Atlantis, and it nicely sets the stakes for the rest of the crossover. With a pared down Squad and a clear conflict, I’m intrigued by this new arc. 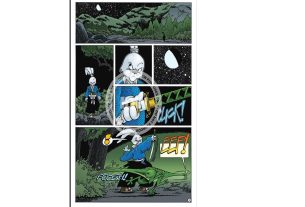