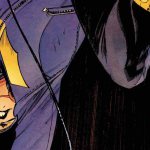 Ray: A new era begins for Barbara Gordon, but we got a preview of Mairghread Scott’s take on Barbara Gordon in the oversized jam issue Batgirl #25. Now, in #26, Scott throws Batgirl into a new adventure that pits her against an old enemy – and may just turn her own body against her. During Scott’s second story in the jam issue, Batgirl tangled with Grotesque, a masked art thief who Gail Simone introduced. Now, though, Grotesque is not a thief – he’s become a serial killer targeting the rich who likes to mutilate and pose his victims as works of art. We’ve seen quite a few villains themed around targeting the rich lately, and thankfully Scott doesn’t portray him anything but the sadistic lunatic he actually is. He makes an imposing first threat, and the series makes good use of Barbara’s unique mind. Her photographic recall is one of her most underused abilities, and Scott effectively shows the events of the issue through her eyes. This means we’re picking up information alongside her. However, while Barbara has this hidden strength, she also has one massive hidden weakness as well.

The fact that Barbara has a high-tech chip in her spine and brain is always in the background of the series but rarely used. However, Scott is planning to bring it to the fore and show just how vulnerable she is to this technology going wrong. When Grotesque hits her with a shock taser, it temporarily shorts out the chip, leaving her without her legs functioning for a minute. That’s enough time to allow Grotesque to get away, but the actual fallout from this event becomes clear later. Barbara finds her mind clouded, as the chip in her back is linked to her brain. Shrugging it off, she’s able to pursue the case by investigating the officer handling Grotesque’s case. As she infiltrates the GCPD using her connection to the Commissioner, we get a nice look at how Scott will be handling the father-daughter relationship between Barbara and Jim. I really enjoy how Scott is writing the two leads, and I hope we see more of the supporting characters in future issues. But Barbara might have more pressing concerns, as the chip backfires at the end of the issue and seemingly causes a stroke. Hell of a cliffhanger to leave off on – but this isn’t the only time we see Batgirl this week.