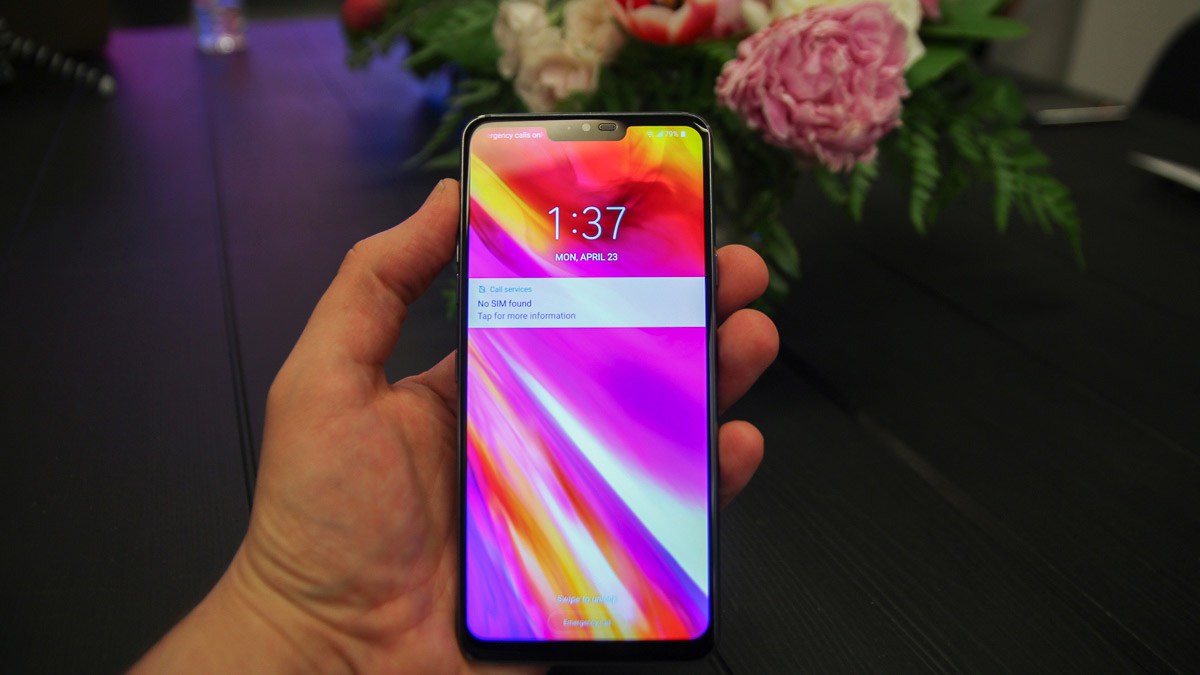 The consumer smartphone industry is heavily dominated by two manufacturers; Apple and Samsung. The fight for third place has driven many manufacturers to create innovative features just to get noticed. LG has done a lot of experimentation with their handsets. Although they’ve come up some bad ideas, most innovations have set the G-series flagships apart from the crowd.

What is the LG G7ThinQ ?

The G7 is the seventh in the line of flagship smartphones by South Korean company, LG Electronics. In the hyper-competitive smartphone market LG has gone to great lengths to differentiate themselves through experimentation with their smartphone handsets.

The “ThinQ” (pronounced “Thin-Cue”) superscript on the product name refers to LG’s AI software. ThinQ watches what you’re doing and strives to improve your experience by adjusting phone settings in real-time. In camera mode, it looks at what’s in your crosshairs and adjusts the camera settings for you. If you’re watching a video, then ThinQ improves visibility by enabling Cinema display mode. Where other smartphones are pushing AI to be your personal assistant, LG is using AI to improve every experience.

How to use the LG G7ThinQ

Simply put, pick it up and use it. LG’s AI “ThinQ” software will do the rest.

The screen is a market leader with up to 1,000 nits of brightness so you can comfortably use it outside in full sunlight. When you switch from watching a video to playing a game, the ThinQ software will adjust your screen settings from Cinema to Game mode; improving the experience without the need for you to make adjustments.

Where ThinQ really shines is the camera software. While I love LG smartphones for the manual control they give me over my photos, there are some times when I just want to point and shoot. It’s good to have an auto mode that does more than just adjusts for light levels.

ThinQ scans what’s on your viewfinder in real-time. Using a built-in library of images and shapes, it can identify what you’re looking at and adjust settings appropriately. Aiming the camera at my press badge, the ThinQ software recognized text. It appeared to reduce the saturation and increase sharpness to make the text more legible. When I moved the viewfinder to a plate of desserts, ThinQ recognized the objects as ‘Food’ and ramped up the saturation to accent the bright colors.

The smartphone also supports Google Lens, allowing Google Assistant to view landmarks or signs and tell you more information about it. A dedicated button on the left side of the LG G7ThinQ activates Google Assistant. If you’re not right beside your phone, FFVR allows your smartphone to act like a Google Home and listen for “Okay Google” from across the room.

No matter how you want to play music the LG G7ThinQ is a good choice. With support for Bluetooth 5.0 and aptX HD, wireless headphones will be able to reproduce high fidelity sound. If you still prefer an analog jack, LG still includes one with the LG G7ThinQ along with a 32-bit HiFi quad DAC to play back high fidelity audio files up to 32-bit at 192KHz. While it may not be the thinnest phone, the LG G7ThinQ includes a large, internal sound chamber and DTS:X-3D software to turn tinny external audio into booming beats.

Why You Should Get the LG G7ThinQ

Three years ago, I reviewed the LG G4. I was impressed at how the specifications met or exceeded those in every other top-of-the-line smartphone. However, what really surprised me was the finite control I had over the camera software. LG added features to control exposure, ISO, and even focal depth. I bought an LG G4 as my primary smartphone, and it also replaced my digital SLR camera for many functions. The G5 and G6 further improved the camera software. What I didn’t expect from the LG G7ThinQ was to be impressed at what happens when I take my hands off the wheel.

The ThinQ AI software improves the user experience in many ways that you’ll quickly find indispensable. In Portrait mode, it softens the image around your subject. In low-light situations it samples from four pixels at a time to vastly improve brightness and color fidelity at the expense of some resolution. In a restaurant, it cranks up the color saturation so your food Instagrams look even more delicious.

Display (and the Dreaded “Notch”)

In the last year, we’ve seen Apple adopt a “notch” at the top of their iPhone X. Part of the top-middle of the screen is blacked out to make room for front-facing speakers and cameras making a “notch” effect in the visible display. Android flagships have followed suit and the LG G7ThinQ is no different. However a unique secondary LCD screen is used instead of the smartphone’s main LCD. We’ve seen the secondary screen before on the LG V20, where it provided valuable notification information without the need to light up the whole smartphone. The secondary screen here is a seamless extension of the main screen that shows your notification icons.

I have not been a fan of the “notch” in general. I feel that it’s a transparent effort by the phone manufacturers to let us believe the phone is “bezel-less” and that the screen reaches fully to all four sides. As a result, I appreciate a phone like the LG G7ThinQ where I can freely turn off the “notch” by disabling the second screen in the display settings or set it to be an accent colour of my choosing.

The LG G7ThinQ is built as rugged as its predecessor. With an IP68 rating, it can survive (short) drops in the pool or a dust storm at the beach. As a dad with two young kids, there is no way to overstate the value in having a rugged phone that can survive the elements.

I found the DTS:X-3D improves audio in the boombox mode, but I would still choose a good-quality Bluetooth speaker for playing music over the internal speakers. The Bluetooth 5.0 spec and aptX HD will provide high quality audio to any good wireless Bluetooth headphones. The analog audio jack means you don’t need to give up your favorite set of cans, and can still enjoy high-definition 32-bit audio produced by the internal quad DAC.

The one place where I want LG’s software to take a back seat is the digital assistant. I’m glad LG didn’t try to shoehorn in an inferior AI and chose to go with the well-trained Google Assistant. Samsung added a dedicated button to their phones to access Bixby, Samsung’s own digital AI. However, there’s no way to reprogram that button if you don’t like using it. According to LG sources, the button on the LG G7ThinQ is locked to Google Assistant as per their contract with Google. However, LG was careful not to rule out the possibility of the button being programmable in the future.

In an effort to differentiate themselves in a competitive market dominated by Apple and Samsung, LG has often added experimental features that don’t always work out. The power button and volume rocker moved to the middle-back of the device on the LG G2. It required retraining my muscle-memory, but I found it to be far more comfortable to use as smartphones got bigger with time. The LG G5 tried adding accessories that slap on, but limited availability killed interest quickly.

There were rumors last year that LG toyed with the idea of dropping the “G7” name from their flagship, but it should be noted that what really stands out in this generation is the superscript highlighting their “ThinQ” AI software. Unlike lifestyle assistants like Alexa, Siri, and Cortana, the ThinQ AI works to improve your phone features. From deciding the best display settings in real-time, to watching what’s on your viewscreen to take the best possible Auto-mode photo, ThinQ optimizes your on-phone experience.

Google Assistant is built-in; both through a dedicated button on the side that lets you immediately make a request, or far-field listening tech that lets your phone listen for “Okay Google” from across the room.

The hardware everywhere receives an upgrade from the LG G6. The 6.1″ QHD+ screen serves 3120 x 1440 resolution with industry-leading brightness and color fidelity. The Snapdragon 845 CPU and 4GB of RAM is among the fastest out there, and the sizable 64GB of storage is accented by expandable storage through microSD. Audio reproduction is among the best you’ll find whether you prefer to listen over Bluetooth, analog audio jack, or just cranking tunes from the internal speaker.

I doubt LG is done with their experimentation, but with the LG G7ThinQ they have settled on an excellent balance of high-end hardware, intelligent software, and are in a position to be one of the best smartphones in this generation. 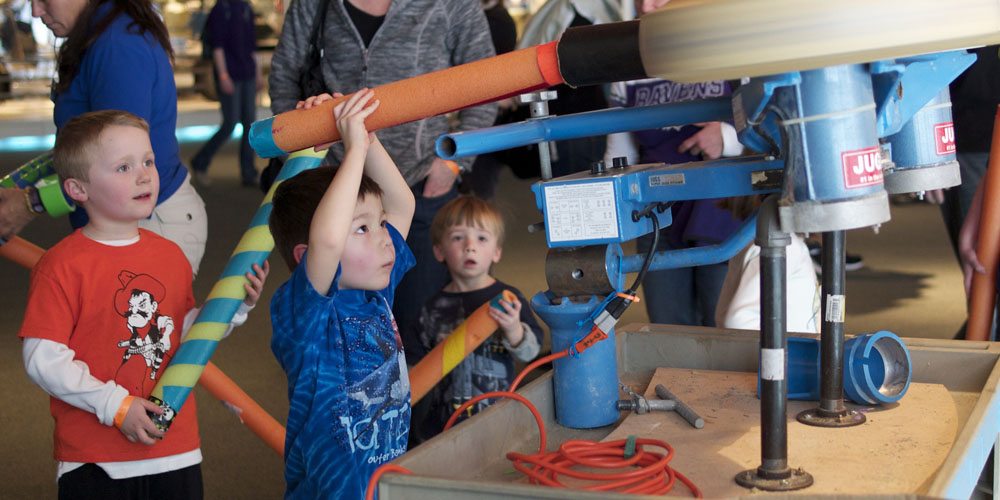 Have Geeklets, Will Travel: Science Centers