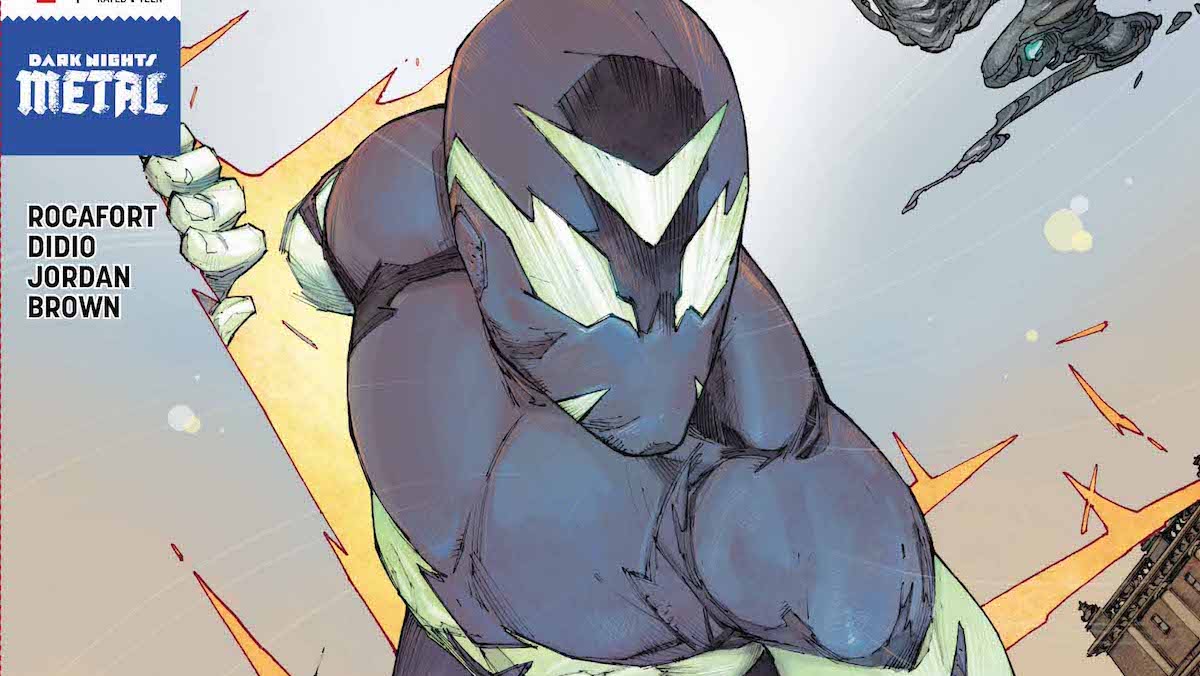 Ray: Sideways #1, the third entry in the “New Age of DC Heroes” lineup is my favorite of the three. Much like Silencer, it gives us an immediately engaging lead character – but unlike Silencer, it lets that character have enough time to breathe and develop before plunging them into chaos. Written by Dan Didio and Justin Jordan (and apparently getting a plot assist from Grant Morrison) and drawn for the first arc by Kenneth Rocafort, this story will remind everyone of one of my favorite young-skewing DC books, the original John Rogers Blue Beetle run – although it hasn’t hit those highs yet, it has potential. Our main character is Derek, a non-white teenager with white adoptive parents who are more overprotective than usual – somewhat understandable, given that he and his mother were in Gotham when Challengers Mountain landed and were separated for days – during white Derek tumbled into a mysterious crevasse and wound up with strange superpowers.

Those powers include the ability to open rifts in time and space, teleporting through them. As superpowers go, it’s not the most impressive, but Derek approaches it like a modern teenager – hoping to use it to become a viral superhero and get famous. We don’t see too much of a supporting cast yet, and the stock bullies at school really drive home the Spider-man vibe, but I do really like his best friend Ernie, a punk/slacker girl with a picture-perfect teen sister who she’s nothing like. Ernie’s dynamic with Derek is a lot of fun from the opening pages, when he rifts into her room and surprises her. I also like what we saw of Derek’s parents, especially his mother – overprotective parents aren’t necessarily bad parents, and sometimes they have very real fears. The concept of Derek being stalked by someone who wants him to stop making rifts is intriguing, but the villain at the end…we’re right back to the 1990s again. Still, out of the three books so far, this is the one where I can safely say I want to read more of this character.

Corrina: I wanted to like this. But it took me nearly the entire issue to get past the fact that the first time we see Derek use his powers, he’s popping into someone’s private bedroom/bathroom. Yes, Ernie calls him out on it but why would you introduce a brand new character that we want to like doing something that is so outside proper boundaries and then basically laughing it off? There had to be so many other ways to introduce a cool power and how the character uses it than stalking.

As for the rest, Derek has an intriguing powerset with almost unlimited story potential. I’m hoping that Derek will have a chance to slide not only through space but time and dimension. He seems to be a good ki but he’s a bit on the clueless side. I mean, he got lost during an inter-dimensional war and he’s not at all worried his powers could be dangerous or scary? However, I did one hundred percent enjoy the relationship between Derek and his mom and the scenes of his isolation in the high school were effective.

It’s going to take at least another quality issue of this book before I can look past that opening, though.