Corrina: It’s Been a Long Time Coming For Duke

Ray: The highest-profile gig ever for a graduate of the DC Writer’s Workshop, Batman and the Signal #1 is also Duke Thomas’ first solo adventure out of Batman’s shadow. So how does Tony Patrick do in his big-league DC debut? Pretty good! This won’t be mistaken for a Snyder comic, and I think that’s a good thing – Patrick gives Duke his own voice pretty clearly, and puts him into an adventure with some fascinating concepts that are unlike any Batman story we’ve seen in a while.

Batman and metahumans rarely go together, but metahumans are exactly what Gotham is dealing with, in the form of a group of juvenile delinquents who developed their powers around the same time Duke’s odd light-based powers emerged. Duke being a metahuman is one of the biggest dangling plot threads in this series, and I’m not sure exactly how they work yet, but neither is he, and that works pretty well. What sets the Signal apart from Gotham’s other heroes is that he’s a hero who operates in the daytime.

While Batman and the rest of his team try to avoid prying eyes, Duke is sort of Batman’s “representative” in Gotham, which leads to some amusing moments as people are getting tired of the disruptions in their daily commute. I was also really happy to see two of the We Are Robins’ crew return – that series did not last nearly long enough. I was a bit surprised to see that Duke is apparently no longer Bruce’s ward and living at Wayne Manor – I was looking forward to that dynamic, but I am intrigued by the character of his cousin Jay. A tough ex-military guy, he seems like a decent man but his parenting style is definitely going to complicate Duke’s sneaking out for vigilante duty. There’s a lot of interesting little details this issue, from a new police detective who will remind a lot of people of Misty Knight for obvious reasons, to the introduction of Arkham’s “juvenile hall”. It’s a packed comic, maybe a bit too packed, but Duke is an appealing lead, and this issue gives us a good look into his world. A worthy addition to the Bat-line.

Corrina: Though Snyder’s run on Batman seemed relatively recent to me, it also seemed as if Duke Thomas had been around a long time. Indeed, he was introduced in Batman Vol 2 #21 which was published in August of 2013. That’s over four years before Duke truly received a comic that spotlighted him. I suspect part of this was because DC wasn’t entirely sure what use to make of Duke. Was he another Robin? For a while, it seemed like We Are Robin might be his book but was not to be. Of course, DC wasn’t even sure if Tim Drake was ever a Robin for a while, so sorting out Duke’s role was bound to take some time.

Still, there have been other black members of the Batman Family and they’ve been mishandled, to say the least. Alas, no one remembers poor Orpheus or Onyx. I hope DC does right by Duke and he doesn’t suffer the same fate. This is an excellent start. Duke’s powers not only differentiate him from the rest of the Batman Family but also should allow him to play with the heavy hitters of the DCU and, hopefully, we’ll see him in the wider DC world someday.

I like the introduction of Duke’s Uncle Jay. He’s supposed to complicate matters, hopefully leading to some interesting stories laster about the tensions between Batman’s demands and Uncle Jay’s rules.

I too, like Ray, am also thrilled to see the cast members from We Are Robin. That was a brilliant concept for a book–the teenagers forming their own crew of Robins to protect parts of Gotham when no one else could- and I was sad to see its run truncated. Here’s hoping The Signal’s tales last far longer. 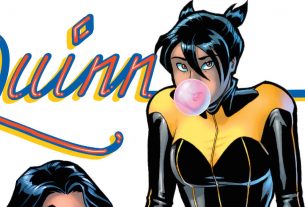 Review – Harley Quinn and the Birds of Prey #4: Last Call