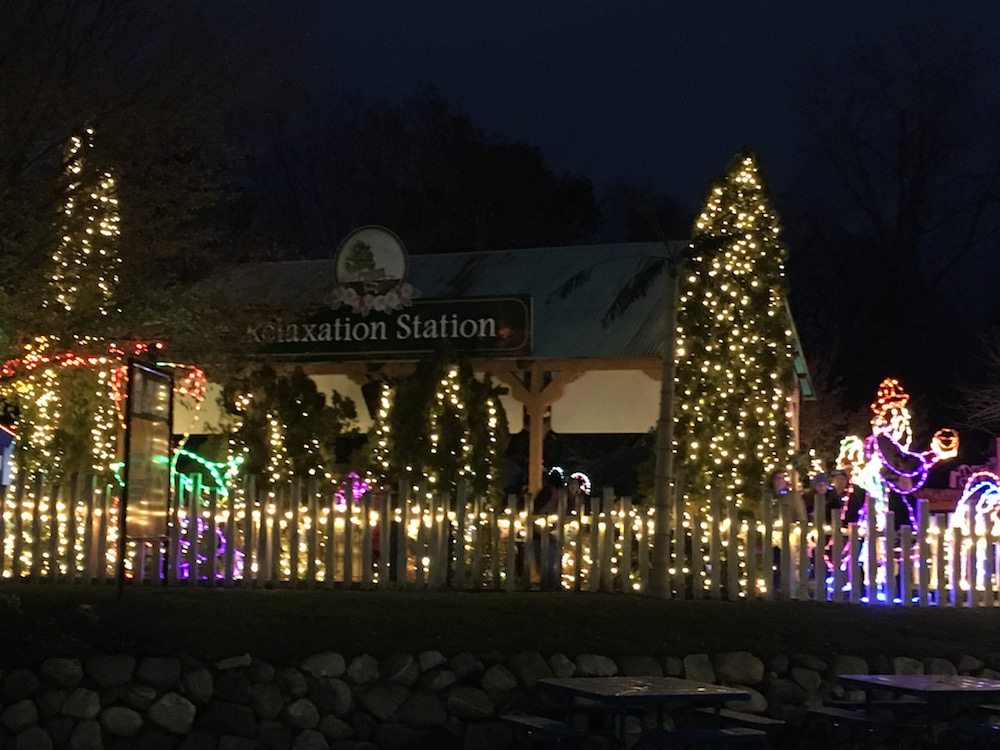 Somewhere between the “Frost: A Holiday Cirque Extravaganza,” making the s’mores with my daughter, and the tree lighting, I realized that Six Flags New England’s first Holiday in the Park had exceeded my expectations.

Indeed, it’s sort of a mini-trip into New York City for Christmas, with being able to see a show and then walk over at twilight for a spectacular tree lighting. In between, over a million lights decorate the park, including a giant-size walk-through ornament.

As I watched the Christmas tree lighting (shown in the video above), it occurred to me that the first (hopefully annual) Six Flags New England’s Holiday in the Park event was a good substitute for some of the small-town celebrations that likely took place in years past but have vanished from many towns as the world has changed.

Sure, the Six Flags event is commercial but so were the original holiday parades of years past. Macy’s Thanksgiving Day Parade, after all, was created to sell toys at the Macy’s Department Stores. The holiday parade depicted in the classic A Christmas Story is similarly part of celebration designed to bring in the crowd to shop downtown at Christmas.

Bottom line, this was a fun event, more fun than I had anticipated. I expected a park full of beautiful lights, a tree lighting ceremony, and some characters to circulate in the grounds. But there was more. (Even s’more!)

The “Frost” show was terrific. Not the Rockettes, of course, but it featured terrific dancers, holiday music, and acrobats that had the whole audience holding their breath, from balancing tricks to a trio of “elves” on the trampoline set up in the center. They made all their moves look easy. Even my jaded teenage twins enjoyed it. There are several other shows, these outdoor, throughout the park.

They also insisted on the s’mores. The Park has several fire pit areas to roast the s’mores and, of course, they sell the s’mores kit of crackers, marshmallow, chocolate, and a roasting stick.

I’ve found there are two kinds of people who make s’mores: the one who finds a hot spot in the fire and carefully rotates the marshmallow for an even heating (my son) and the one who sticks the marshmallow into the flames to light it on fire, burns it, and then blows out the flames (me). Either way, it was a nice touch to Holiday in the Park and the fire had the added benefit of adding warmth.

I expected the cold to be more of a problem, but between spending time indoors at the show, the s’mores fire pits, and the numerous standing space heaters located in the park, cold turned out to be much less of an issue. A few of the rides were even open, though the availability of those depends on the weather conditions.

In all, it was a fine addition to the events at the park. It’s not as elaborate as the Fright Fest, but it’s a fun experience for any season ticket holder. And, naturally, Six Flags offers a deal on 2018 season passes that also allows admission to the Holiday in the Park. The event will run on Fridays and weekends through January 1st.

Disclaimer: I attended a press event with free admission on the event’s opening day.

2 thoughts on “Six Flags Holiday in the Park: Hometown Feel”